The Walt Disney Co. (DIS) has a tough road ahead of itself Wednesday after the bell.

It's not that I believe the company will miss earnings, but several potential catalysts have already been released. In early April, investors learned about Disney+ streaming, and Tuesday we learned about the projected film slate through 2027. That one is easy to sum up:

As a movie fan, my biggest concern here is the lack of originality. Do we really need every animated Disney film remade into a live action movie? I enjoyed the first Avatar film, but I haven't been clamoring for a sequel, let alone FOUR more Avatar films. At some point, we'll reach superhero fatigue/saturation. And Star Wars films have been more hit and miss in terms of fan reception rather than guaranteed hit. This is from a fan's view.

From an investor's view: If it ain't broke, don't fix it.

Disney is going to continue to rake in billions. They are sticking with known quantities with huge merchandising potential, fit well into theme parks, and will drive traffic to Disney+ streaming.

Also, the slate beyond 2024 is thin and nothing is set in stone. I would imagine if Avatar 2 and 3 sputter, then 4 and 5 could be shelved. Disney also has the option of taking movies straight to video/streaming. Fact is, Disney will ride these core of films until one finally pulls a John Carter.

It's the perfect momentum "trade." Unfortunately, there won't be another Endgame for quite some time. That was the culmination of a decade of something very special. But Disney should continue to churn out a few 10-figure grossing films each year.

Still, the biggest challenge for Disney tonight is giving investors something "new" to get excited about. 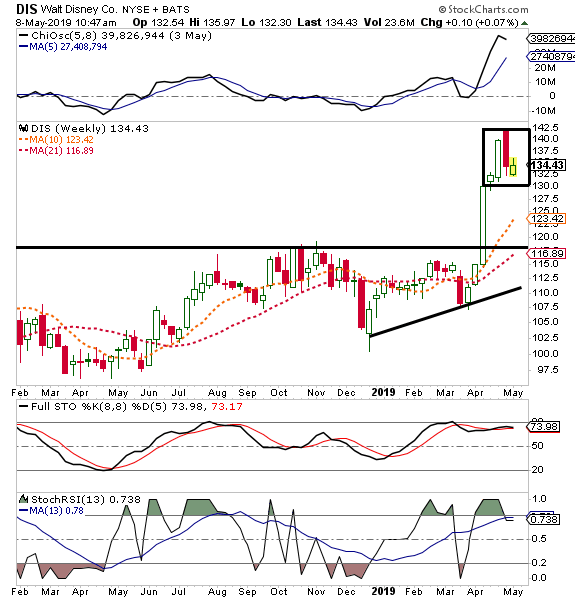 The stock has run $20 over the past five weeks, with a small retracement from recent highs. We've seen this bull flag form between $130 and $142.50, rather wide for Disney.

Secondary indicators have begun to work off the recent oversold readings, but bulls don't want to see those indicators retrace too much or the bullish momentum will get lost in the shuffle.

The options market has the stock priced for a 4.1% move by close of trading Friday. Given the recent big move in the stock, this may feel a bit tight to some traders, but it is pretty wide compared to the recent past.

Only once in the past ten reports has Disney moved greater than 3.6% intraday the day after earnings. That's a MAXIMUM intraday move, not even based on a closing basis. Very little changes, even if we extend our view to price changes over the following three days.

Even if the view is extended 13 days or 21 days post-earnings, we see little movement, especially when we consider changes based on tomorrow's close. Traders seem to dig into the initial reaction. While Disney doesn't offer much in the way of trends, one consistency is we're not likely to see moves beyond 2% or 3% over the next few weeks after the initial reaction to earnings.

Disney echoes the Electronic Arts (EA) analysis (from Tuesday) in a lot of ways. I'd maintain investing views on the stock rather than trading views.

I'd preferred to see a sell-the-news reaction so I could reenter the name, but for today I'm on the sidelines.

Get an email alert each time I write an article for Real Money. Click the "+Follow" next to my byline to this article.
TAGS: Earnings | Investing | Stocks | Technical Analysis | Movie Production | Movies | Stock of the Day