By BRUCE KAMICH Jul 22, 2019 | 09:39 AM EDT
Stocks quotes in this article: DIS
Walt Disney Co. ( DIS) is Real Money's Stock of the Day for Monday as "The Lion King" over the weekend became its fifth blockbuster of 2019, with the digital remake grossing $185 million at the domestic box office and collecting $531 million so far after opening early in China. Did parents want to beat the heat with their children or was Disney's timing spot on? (Disney is a holding of Jim Cramer's Action Alerts PLUS charitable trust.)
Let's check out the charts and indicators to see if Disney stock can respond on the upside and if anything has changed from our last review, where we wrote, "Prices have moved higher the past three months but price momentum has slowed. While the trend is still up and the daily OBV line is bullish, we want to think about defense as prices discount the future. I would raise sell stop protection to a close below $136."
In this daily bar chart of DIS, below, we can see that prices worked lower last week, perhaps from profit taking because of a soft broader market or because of traders becoming defense. Prices were higher at Monday's open, but a deeper decline to test the rising 50-day moving average line would not surprise me. The rising 200-day line is far below the market -- maybe too far below. The On-Balance-Volume (OBV) line weakened last week and the Moving Average Convergence Divergence (MACD) oscillator crossed to the downside for a take profits sell signal.

In this weekly bar chart of DIS, below, we see the same bearish developments as last week. Prices are extended above the rising 40-week moving average line. The weekly OBV line shows a peak in April and a decline. The MACD oscillator has continued to narrow toward a possible bearish crossover.

In this Point and Figure chart of DIS, below, we can see a possible upside price target of $207, but a trade at $146.49 is needed to refresh the uptrend. 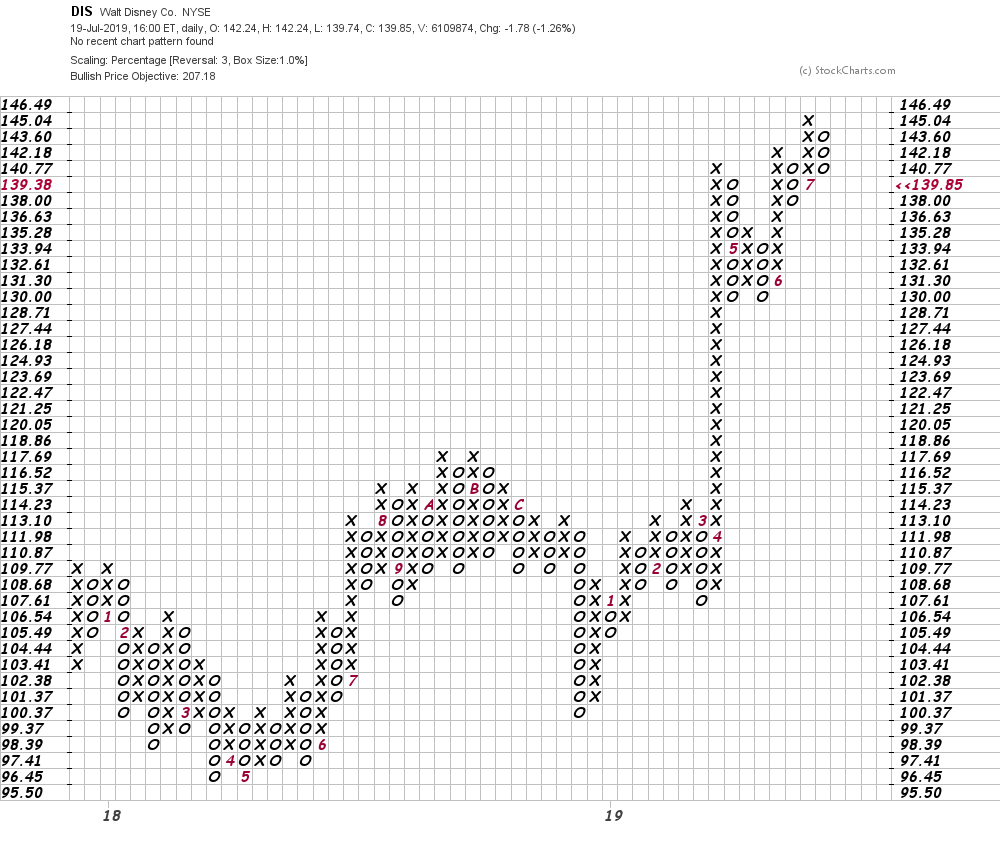 Bottom line strategy: "The Lion King" could well be another big winner for DIS, but remembering that the marketplace is a discounting mechanism we do not want to become too friendly to the bulls.
Get an email alert each time I write an article for Real Money. Click the "+Follow" next to my byline to this article.
TAGS: Investing | Stocks | Technical Analysis | Consumer | Digital Entertainment | Movie Production | Movies | Resorts and Hotels | Television Production/Distribution | Real Money | Stock of the Day