What's the incentive to own flailing Dick's Sporting Goods (DKS) , which fell 11.2% to close at $34.61 on Tuesday after management issued disappointing forward guidance?

Wouldn't folks rather own Nike (NKE) or heck, roll the dice on Under Armour (UA) or Lululemon (LULU) ? After all, sporting-goods stores haven't been sporting-good buys for years. And even if you like retailers, why limit yourself to a specific retail sector that's been seeing -3.7% same-store sales growth and is projected to see 0% to 2% growth, at best, going forward?

Maybe you want to chase the thesis that with 20% short interest Dick's could see a short squeeze. Unfortunately, most short squeezes require a technical trigger or some good fundamental news to set them off, and I don't see either of those happening any time soon.

Consider Dick's earnings report, which came out Tuesday morning. It looked decent enough, with the company reporting earnings per share of $1.22 -- $0.16 ahead of estimates. Revenue was also essentially in line, while management announced plans to relaunch Dick's private label.

But guidance for the upcoming fiscal year's EPS came in at a midpoint a dime below analysts' expectations. That sent DKS tumbling, so it's clear that investors weren't impressed with management's forward guidance. I can't say I blame them, and I think it's fair to cross off the potential of any positive fundamental news causing a short squeeze in the near term.

As far as Dick's technical setup goes, Tuesday's breakdown has pushed Dick's well below the stock's recent trading channel (the black diagonal lines at right below): 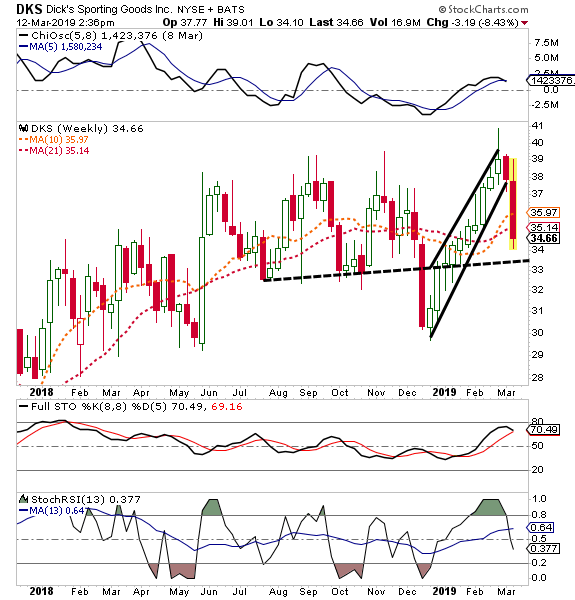 This channel shows that the bulls were in strong control as Dick's moved from $30 to $40 since Christmas Eve. But multiple secondary indicators -- the Chaikan Oscillator, Full Stochastics and Stochastics RSI -- are now showing bearish crossovers.

Add it all up and I'm looking for Dicks to test $33 initially. However, I suspect that the stock will wallow between $30 and $34 for several months.

To me, there are simply too many other stocks out there that offer significantly more upside, sit in stronger overall sector or have catalysts that can justify taking on a risk similar to Dick's. So for now, I'm shopping elsewhere with my portfolio dollars.

Get an email alert each time I write an article for Real Money. Click the "+Follow" next to my byline to this article.
TAGS: Fundamental Analysis | Investing | Stocks | Technical Analysis | Retail