To be honest, I've always liked Wiffle Ball. Pretty sure I was once the home run king of 58th Avenue.

I've always liked Dick's Sporting Goods, Inc. (DKS) as well. The market, however, doesn't like to walk the aisles looking at baseball bats or hunting for their next pair of running shoes. The market just likes performance.

That means while equity traders like expectations-beating revenue, they don't really like it when that revenue prints in contraction for the year prior. They really, really, don't like minus signs when they show up in comp sales. That's where we are now.

I looked for a bright spot. E-commerce? That's where we'll go. While Dick's Sporting Goods' 17% growth in most business lines is nothing to sneeze at, companies finding some satisfaction in this space are in the 30%-40% range, or even higher. Just look at Walmart Inc. (WMT) and Target Corp. (TGT) . Those are the names best positioned to compete with Amazon.com, Inc. (AMZN) in the near- to medium-term future.

The sporting goods chain's poorest performance seems to be spread across the hunting and electronics categories.

Restricting firearms sales may or may not have been the right thing to do. The answer may depend on one's political point of view. But there is little doubt that Dick's now finds itself in a position where it needs to leave the business of selling goods associated with hunting, and in fact, that's just what the firm will indeed do -- in roughly 125 stores. At least this should alleviate the lead balloon of margin under-performance from those stores. 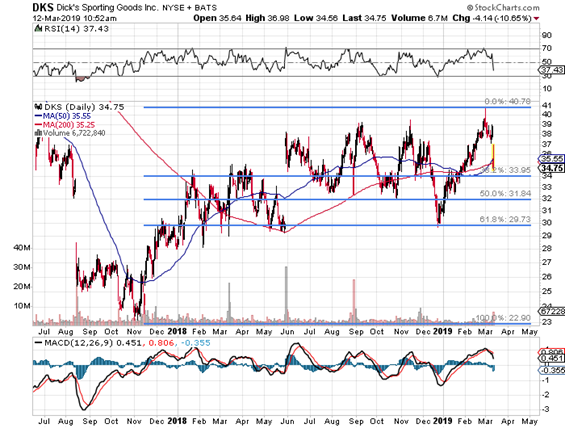 One needs to look at a chart going back to late 2017 in order to understand what happened to DKS stock Tuesday. How interesting is it that the name passed a serious test of the 38.2% re-tracement of the entire move from that earlier point?

This is what I think: The stock is not broken. Even though debt outweighs cash, I do think the balance sheet is okay. DKS can pay their bills. That said, the company's prospects for growth moving forward are just not worth tying up capital. They would need to get that dividend yield up around 4% to wet my whistle.

If you want to play this game, I do not think you'll lose your shirt. I just don't know how much the public will spend on sporting goods over the next six months, particularly if economic growth becomes an issue.

Get an email alert each time I write an article for Real Money. Click the "+Follow" next to my byline to this article.
TAGS: Earnings | Investing | Markets | Stocks | Technical Analysis | Retail | Consumer Products | U.S. Equity | Sports | Stock of the Day