Dick's Sporting Goods Inc. (DKS) may need to make some "trades." Otherwise, the downtrend could continue as sellers have been more aggressive since early April.

Let's check with our technical scouts.

In the daily bar chart of DKS, below, we can see basically a choppy sideways pattern from July to April. Things change from April. Prices cross above and below the 50-day and the 200-day moving average lines for much of the year. The 200-day line starts to crest in May and the 50-day moving average line is about to cross below the now declining 200-day line for a bearish dead or death cross.

The movement of the On-Balance-Volume (OBV) line shows a rise until the middle of April and then a decline. The declining OBV line tells us that sellers of DKS have become more aggressive.

The trend-following Moving Average Convergence Divergence (MACD) oscillator crosses to the downside in April and below the zero line in early May where it continues.

In the weekly bar chart of DKS, we are getting some recent sell signals. Prices are below the declining 40-week moving average line.

The weekly OBV line shows a decline now after a long rise and the MACD oscillator has crossed below the zero line for an outright sell signal.

In this Point and Figure chart of DKS, below, we can see a bearish price projection of $29. A decline below $30 will be bearish and could precipitate lower prices with $25 as the next possible support area. 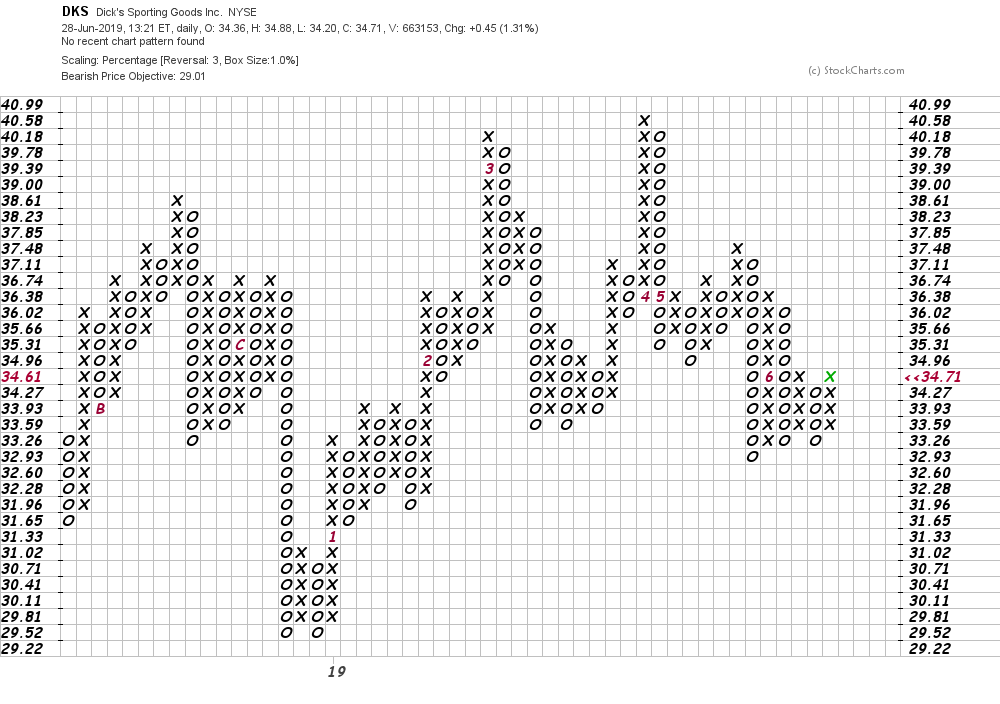 Bottom-line strategy: Somewhere DKS missed a signal from the coach in April. Prices have turned lower and it could be a bearish summer for the sporting goods retailer.

Get an email alert each time I write an article for Real Money. Click the "+Follow" next to my byline to this article.
TAGS: Investing | Stocks | Technical Analysis | Retail | Sports business | Sports