Deutsche Bank's (DB) inability to learn from its checkered past has many market watchers questioning both bank bigwigs and the regulators charged to keep them in line. 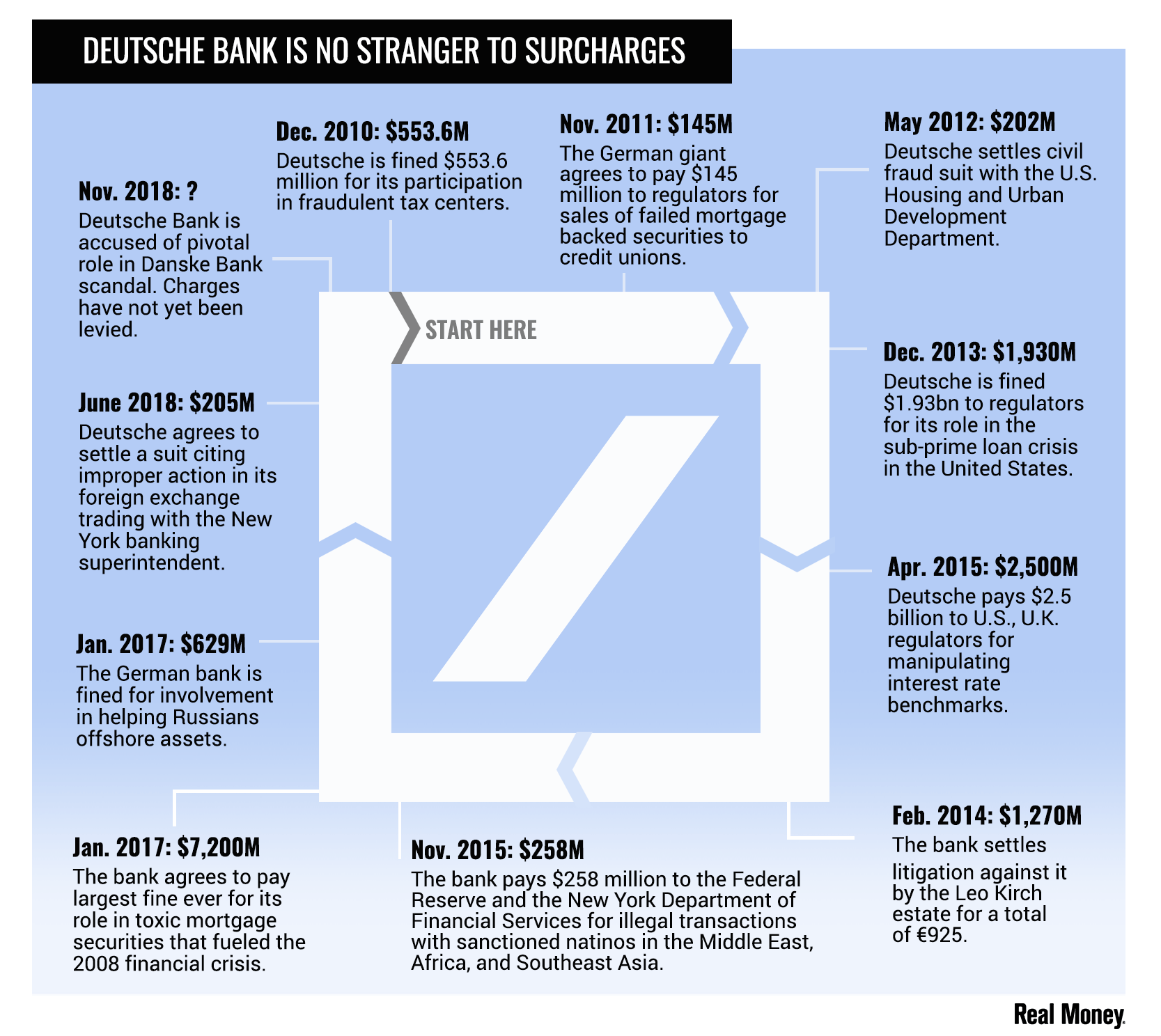 Given the cavalcade of costs that have racked up, almost eclipsing the bank's market cap, tough questions are being asked about efficacy of executive and regulatory policy at major banks.

The hot seat atop Deutsche Bank got a bit hotter after Thursday morning's raid on the company's Frankfurt headquarters.

CEO Christian Sewing, who assumed the helm at Germany's largest lender in April, was brought in to restore a reputation to the beleaguered bank and create value for shareholders.

"In his more than 25 years at Deutsche Bank Christian Sewing has proven himself a strong and disciplined leader," chairman Paul Achleitner said in a formal statement upon Sewing's accession to the executive suite. "The supervisory board is convinced that he and his team will be able to successfully lead Deutsche Bank into a new era."

With shares down nearly 5% on Thursday amid yet another scandal, that take is appearing overly optimistic.

However, given his recent start at the bank, Sewing's job is likely to be safe as he seeks to wheel the lumbering ship toward profitability and past the missteps that largely fall at the feat of his predecessor, Jon Cryan.

The same might not be said for Achleitner, who has already had his feet held to the fire by shareholders this year and may have finally lost the confidence of shareholders as the bank's stock charts to all-time lows.

Adding to the toxic milieu at the top for Deutsche is unrest between top compliance and U.S. officers and the recently raided Frankfurt headquarters. According to CNBC, chief regulatory officer Sylvie Matherat and America's head Tom Patrick are two leaders who may be on the company's ever-bloodier chopping block.

The potential sacking of a top regulator amid continued offenses against banking regulations would be particularly problematic and might only add to the pain for shareholders as governmental entities might only insert themselves more firmly.

Or maybe not, if history does indeed repeat itself.

"Everyone has been asleep at the wheel," Bill Browder, CEO of Hermitage Capital Management told Real Money of the regulators' response to both the Panama Papers and the Danske Bank (DNKEY) scandals that have helped drag Deutsche further into disrepute as well as the still churning Russian laundry.

"Two offshore companies that look like investment companies that are trading millions in building materials each day should raise red flags," he said. "We've actually filed a criminal complaint against the Danish regulators [in the Danske Bank case]."

Browder, who has personally been a target of Russian president Vladimir Putin due to his involvement in the Magnitsky Act, so named for his slain lawyer Sergei Magnitsky, added that the money laundering problem emanating from Russia reaches beyond Deutsche and Danske.

"Vladimir Putin and his cronies have stolen over $1 trillion from the Russian people in the past 18 years. They aren't keeping that money in Russia," he said. "Over the next five to ten years we are going to discover that a number of prestigious banks have been essentially laundering money for the Russian mafia."

"An employee at Deutsche doesn't care about $18 billion in fines," he said. "He cares about his own freedom."

Browder added that if there are no major penalties that involve more than simply fines in future cases, investors should not expect behavior to change significantly.

Get an email alert each time I write an article for Real Money. Click the "+Follow" next to my byline to this article.
TAGS: Investing | Stocks | Stock of the Day