Dentists. That's what I was thinking about this past weekend.

No, I wasn't having a tooth pulled, nor a cavity filled. Didn't even have to go for a cleaning. It was because some dentist in Connecticut (this was basically his bio) who doesn't follow me on Twitter, somehow got hold of one of my charts from a follower of mine and started arguing about it in my timeline with some other folks.

Oh sure, that happens all the time. I mean it's social media after all, the place where cranks thrive. But somehow this weekend it struck me because this dentist was scoffing at anything negative these other folks noted about the market. And it's not just that he scoffed. Many scoff at anything concerning about the market much the same way the perma bears scoff at anything positive. It's that his Twitter bio said dentist.

You see, my mentor in this business, the late great Justin Mamis, always used to say dentists were among the last to buy.

Then, later that day I was reading the manuscript from a soon-to-be released book "The Revolution that Wasn't" by the Wall Street Journal's Spencer Jakab. The book will be released in January and I recommend it. The book is about Reddit, Robinhood (HOOD) , GameStop (GME) , meme stocks and general speculation that took place earlier this year. Jakab has a quote from Henry Laufer, who did a stint at Renaissance Capital. When asked - and I'm paraphrasing here - who takes the other side of their trades, his response was, "It's a lot of dentists." Oh my.

Jakab goes on to say that in the 1990s dentists were the stereotypical retail investor who learned the hard way that they couldn't translate their general smarts to making smart investments and outwitting Wall Street.

Since I worked with Justin back in the 1980s, and he was using that phrase then, it's pretty clear it wasn't just a 1990s thing. It wasn't a mid 2000s thing either. No, it seems to me this notion about dentists has been around for generations. Whether it is true or not, I don't know. In the days of passive investing, it might be less true than it used to be, but this weekend it struck me.

One reason is that I was asked about the Hi-Lo Indicator for the New York Stock Exchange, which made it down to 0.21 on this recent trip. Under 0.2 gets it to an extreme oversold. The question was if it had ever gotten this low with the S&P 500 at its highs. It hasn't. But the closest I can see, at least in the last 20-plus years, is early 1999.

The S&P 500 corrected about 4% (similar to our recent decline) and the Hi-Lo Indicator got down to a similar level. That's the black arrow on the chart. I've put a lot of data on this chart so I wanted you to see the blue arrow as well, which was in the fall of 1999. That was to be expected as the S&P 500 corrected over 10% and did so over the course of months.

Since the Hi-Lo is a breadth indicator, it makes sense that the McClellan Summation Index from then was also heading down and had been for months.

After last Thursday's pullback in the market, I said I thought we would rally again before midweek this week, when my Oscillator will get back to a short-term overbought condition. And we did, although I thought the small caps would participate. They did not.

In fact the divergence with breadth on the NYSE is growing, not shrinking. I still think there is another rally try this week. But if this divergence persists and instead of closing that gap, it continues to widen, I am going to find myself staring at more statistics and indicators from the late 1990s. That divergence lasted about 18 months in the late 1990s, but what came after was more like a root canal than a basic teeth cleaning visit. 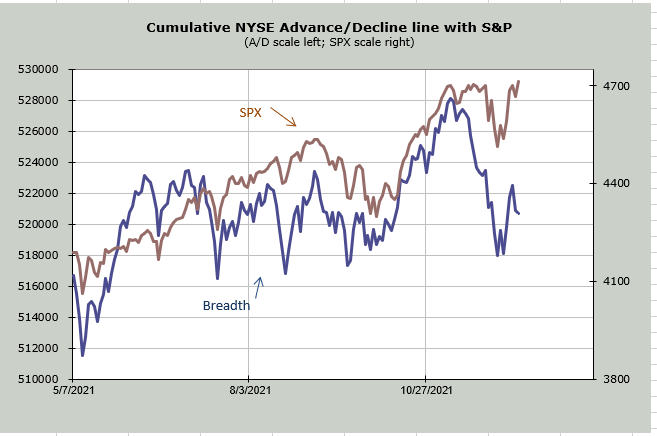