By BRUCE KAMICH Aug 29, 2019 | 01:40 PM EDT
Stocks quotes in this article: DELL
Dell Technologies Inc. ( DELL) is due to report earnings Thursday after the close with consensus estimates expecting $23.38 billion in revenue and EPS of $1.50. I have no opinion on the results but I do have an opinion on the company's technical picture.
In the daily bar chart of DELL, below, we can see that prices rallied from January to May but they have given back most of those gains by late August. Prices are below the declining 50-day moving average line and the declining 200-day line.
Trading volume has increased the past three months compared to April and May heading into the top. Increased volume in a decline confirms that traders believe in the decline. The daily On-Balance-Volume (OBV) turned down in early May and is another sign that sellers of DELL have been more aggressive.
The Moving Average Convergence Divergence (MACD) oscillator is pointed down and not narrowing toward a cover shorts signal.

In the weekly bar chart of DELL, below, we can see that prices have broken a three-year uptrend and the slope of the 40-week moving average line is negative. The weekly OBV line has weakened the past four months so there has been considerable selling or distribution.

The weekly MACD oscillator is bearish.

In this first daily Point and Figure chart of DELL, below, we can see a potential downside price target of $42. 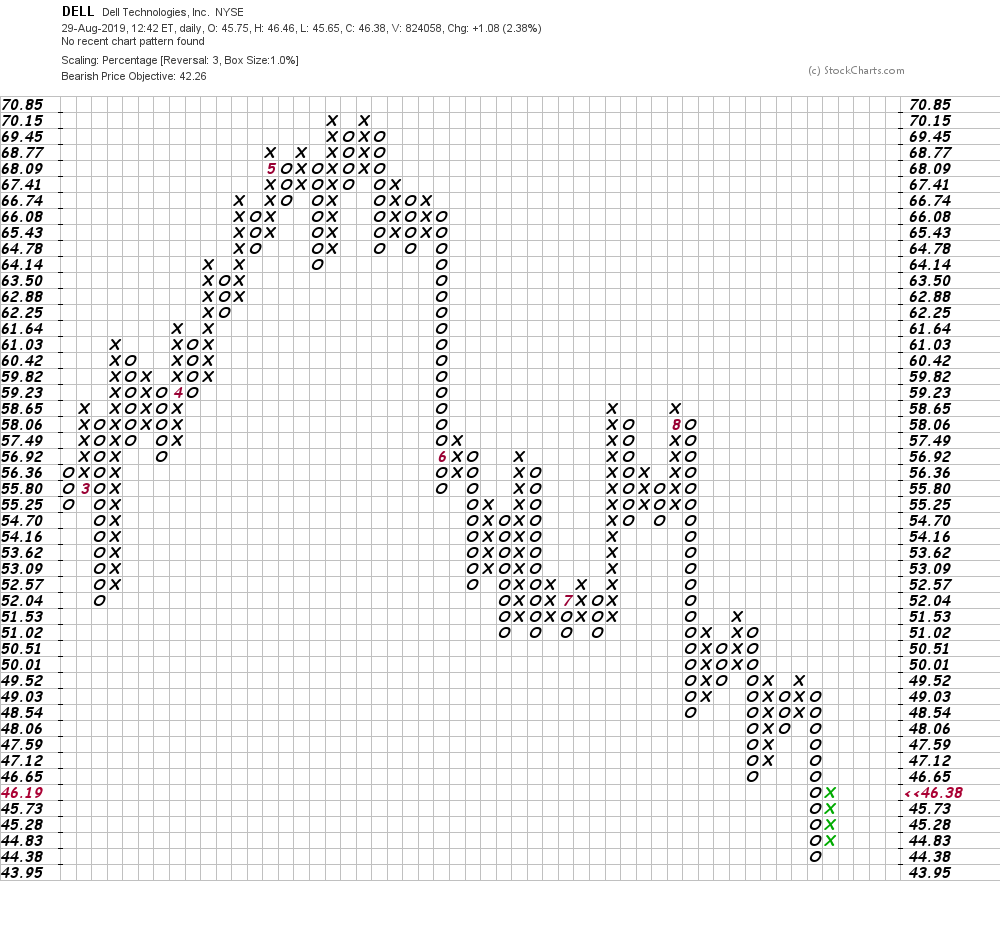 In this second weekly Point and Figure chart of DELL, below, we can see a potential downside price objective of around $30, which would mean revisiting the price areas from 2017.

Bottom-line strategy: I have no idea if DELL will hit or miss its numbers but the charts and indicators suggest further declines in the months ahead. Avoid the long side of DELL. Our targets are $42 and maybe $30.

Get an email alert each time I write an article for Real Money. Click the "+Follow" next to my byline to this article.
TAGS: Earnings | Investing | Stocks | Technical Analysis | Technology | Technology Hardware & Equipment