All alone. No one else was around to steal any thunder.

Deere also generated $11.33 billion in revenue for the reporting period, annual growth of 16%, and was nearly $1 billion ahead of what Wall Street was expecting. Equipment operations net sales increased 18.7% to $10.276 billion. Net income for the fourth quarter was hurt by impairment charges and employee separation costs of $211 million and $458 million after-tax, respectively.

Breaking sales down by individual lines of business, Production & Precision Agriculture remains Deere's largest driver of revenue. This unit contributed sales of $4.661 billion, up 23% over the comparable period last year, for an operating margin of 16.7% versus last year's 15.2%.

Deere ended fiscal 2021 with a net cash balance (cash, equivalents, marketable securities) of $8.745 billion, up more than 11% over the year. Gains were also made up and down key areas of the asset side of the balance sheet, notably in net receivables, inventories (not at the expense of cash) and retirement benefits.

On the liability side of the ledger, long-term debt, while large, has been stable, but there was growth in short-term borrowings as well as accounts payable (inventory building). Total assets easily outweigh total liabilities less equity. Deere will have no problem (my opinion) meeting all obligations.

For fiscal full year 2022, Deere projects net income to land in a range of $6.5 billion to $7 billion, which at the midpoint is better than the $6.65 billion that Wall Street had in mind. As far as segment performance is concerned, Deere expects Production & Precision Agriculture sales to increase 20% to 25%, while Small Agriculture & Turf grows 15% to 20% and Construction & Forestry gains 10% to 15%.

This was a really good quarter, and it came attached to some positive guidance. These positives are despite facing all the supply chain and component issues encountered by all other large industrials. Unlike all those other industrials, Deere went through a five-week labor strike as 10,000 employees represented by the United Auto Workers walked out back on Oct. 14. The labor dispute was resolved with Deere investing in its existing labor force.

Somehow through all of this Deere continued to execute at a high level. In addition, despite legitimate reasons to adjust earnings as so many public companies do, Deere still chose to report the GAAP results. We appreciate that. All in all, I think CEO John May simply kicked some tail here in late 2021. Nice job, Mr. May. 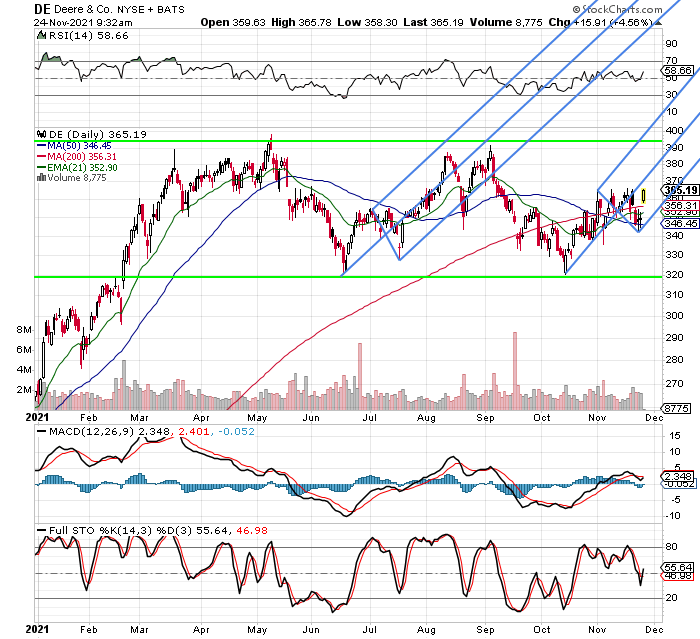 As readers can see, that is giving a little bit of a lift to our indicators. However, after nearly a full year of moving sideways, Relative Strength, the Full Stochastics Oscillator and the daily moving average convergence divergence (MACD) had all been rather neutral coming into this release. Deere pays shareholders $4.20 per year just to stick around, which sounds like a lot, but at these prices is just a yield of 1.2%, so not really that much of a factor in making a decision on holding equity.

As for the chart, it appears this rally, in place since early October, is a carbon copy of the June- through-September rally. I think I would rather sell discounted equity risk exposure than go through the expense of investing in the equity right here. Not that the stock is expensive at 20x forward earnings, and I do think that holding a name like this could be an excellent way to play a post-pandemic/infrastructure building world. I just think before we get to year's end there may be a better day than today to buy these shares.

Almost incredibly, Dec. 17 $320 puts are still paying almost $1.60. Seems overvalued with a strike price $45 below the last sale, less than four weeks out. Unless somebody knows something I don't. That's a sale I might make. If someone were to purchase equity here, I would think writing Dec. 17 $385 calls against the position, thus knocking $5 off of net basis, might be prudent.

Get an email alert each time I write an article for Real Money. Click the "+Follow" next to my byline to this article.
TAGS: Earnings | Fundamental Analysis | Investing | Stocks | Technical Analysis | Construction & Engineering | Agriculture | Industrials | Real Money