Such an interesting session. No, there was no equity market-wide fire sale in response to the Federal Open Market Committee's policy statement, nor the FOMC's economic projections made on Wednesday. Of course there has been some repositioning, but did we really learn anything? Have they really told us anything that we did not already know? We are well-read on the subject matter, are we not? We have gone over each and every potential economic outcome that our meager brains can possibly think of a thousand times, and for each one decided how we think we should be positioned, and how we think the central bank itself should be positioned.

Should it be a surprise then that Treasury markets find demand in response to central bank posturing that is broadly seen as hawkish, even though I have told you that I think they are a bit late, making their posture more dovish than probably appropriate for the moment? The U.S.10-year note has made the round trip, yielding 1.48% just ahead of the Fed's Wednesday afternoon clambake, then as algorithms sold the longer end of this curve that 10-year paid as much as 1.59% overnight as Wednesday melted into Thursday. That yield dropped to 1.52% by the end of Thursday's regular session and I see U.S. 10-year paper paying as little as 1.47%/1.48% as I work my way through this column. Appetite has been even more aggressive for the U.S. 30-year bond.

Readers will note that the 30-year bond hit its lowest yield (2.12%) since mid-February on Thursday, and I have seen the long bond go by with a 2.06% handle just after 4 a.m. New York time. Of the Treasury yield spreads deemed most important by economists (you already know because I have often told you that the 10-year/3-month spread is the most accurate harbinger of economic contraction that we have), the 10-year/3-month spread stands at a rough 144 basis points, the 10-year/2-year spread at about 127 basis points, and the 30-year/5-year at just 121 basis points.

The bond market, or at least the market for U.S. Treasury securities, is trying to tell us something. This pressured series of yield curve spreads is telling us a tale of at least one of, but possibly a mix of, three potentially game-changing economic/ market impacts.

1) The bond market doubts the sustainability of this economic recovery.

2) The bond market accepts the Fed narrative that the current pace of consumer-level inflation is indeed transitory.

Should any or all of these factors to some degree prove true, as the Fed for now has committed to a continuance of financing the federal government at artificially reduced expenses to the tune of $80 billion per month, but also against my advice (which somewhat arrogantly I am willing to point out has historically been policy error) to for now keep on purchasing $40 billion of mortgage-backed securities every month. Despite clear evidence that these purchases have long stopped providing benefit and have actually become harmful. The only determination that I can make (I think) is that what will prove most transitory is this current bout of U.S. dollar strength.

Thursday's price discovery in light of this movement in both Treasury and currency markets has forced capital allocation decisively away from the entire commodity complex, and perhaps non-ferrous metals specifically as the Chinese government has taken steps to reduce the impact of elevated pricing for metals such as copper, aluminum and zinc upon both the Chinese economy and Chinese businesses.

This has also at least for now, across equities made stocks of companies sporting sustained revenue growth more valuable than stocks of companies that would do better in an environment where "healthy" inflation and organic economic growth coexist in some kind of alternate universe. Hence, your miners have been slapped around while your tech stocks simply scored. As far as trading goes, just so you understand that this game is not easy, I came into the week with a simple ratioed diversity hedge in place. Long ServiceNow (NOW) and Salesforce (CRM) versus longs in Alcoa (AA) , Freeport-McMoRan (FCX) and Southern Copper (SCCO) .

All I can say there is "Thank goodness for ServiceNow." Bill McDermott has made this trade work when it could have been a disaster. In managing the trade the day after the Fed meeting, I shaved the two winners to feed the three losers and added paper silver (SLV) to the trade to get the ratio back in balance without using any new capital. The entire aggregate exposure remains the same. That's key.

If you are wondering why Thursday was quieter than you might have expected, why Monday will be quieter than usual, and why markets did not take a day off on short notice as Juneteenth became a national holiday, it is because today is indeed a triple expiration Friday, also known as "Triple Witch." The final hour of the day is also known as the "witching hour." Trading volumes, especially on the opening and closing bells, will be explosive today.

I am old enough to remember when "Triple Witch" turned into "Quadruple Witch," and I lived long enough, thank goodness, to see 'Quadruple Witch" turn back into "Triple Witch." Just a quick clarification for the new kids, or even the old kids who never bothered to figure out just what this is. You'd be surprised, but this is one of the questions that I receive the most often, and sometimes from sales traders who I have known for decades. Not kidding. Guess it's less embarrassing to ask an old friend via email than to look like you haven't cared for 30 years. (Ever hear of Google?)

To explain, "Triple Witching" or triple expiration Friday, occurs quarterly as Index Options, Index Futures and single stock options all expire on the same day. As derivative products simultaneously expire, all related hedges need to be closed, hence the explosion in trading volume. Now for the question most often asked, the day for a number of years had been referred to as "Quadruple Witching" as until September of last year (2020), there was a fourth horseman... single stock futures, which no longer trade as OneChicago (2001-2020), the exchange where single stock futures changed hands, ceased operations.

To be honest, I never liked using the "Quadruple" term anyway, as "Triple Witching" I always thought sounded much cooler.

... that in both the Empire State Manufacturing Survey and the Philadelphia Fed Manufacturing Survey for June, growth slowed rather significantly for both New Order and Unfilled Orders? On that note, in the New York district, prices paid and prices received stayed hot but showed signs of peaking while down in Philly prices paid and received continue to climb rapidly.

Manufacturing employment gave mixed signals in both regions, but the pace of growth in the average workweek definitely seems to have slowed. Past peak pricing? Not yet. Past peak employment? Not sure. Sustained economic growth? The ice grows thin.

On Thursday, the Technology Sector Select SPDR ETF (XLK) popped 1.6%. Both the Dow Jones U.S. Software Index and the Dow Jones U.S. Semiconductor Index similarly ran 1.6% apiece. Among those semiconductor leaders were Lisa Su's Advanced Micro Devices (AMD) that popped 5.6% to $84.56 on news that Alphabet's (GOOGL) Google Cloud had decided to select the third-generation EPYC processor for the first instance, known as T2D, of its new family of Tau Virtual Machines. My target price for AMD remains $99.

Second, Jensen Huang's Nvidia (NVDA) screamed 4.8% higher, closing at $746.29 on Thursday. I see that stock trading with a $755 handle overnight, but that could be meaningless or just somebody covering an error. At least some of this move came off of the price target increase made by Jefferies analyst Mark Lipacis from $740 to $854. 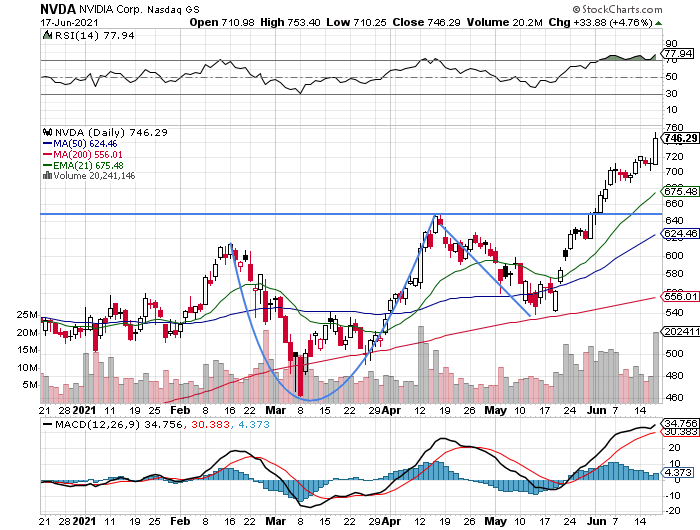 Readers will note that the cup-with-handle pattern that we discussed in this column has provided the fruit of a breakout, which is what we were hoping for. No, the shares are not yet knocking on the door of my $780 price target, which will remain unchanged for now. Just understand that the shares are severely short-term overbought. If you are solely a trader, this is probably your time. If you are an investor, which is what I am in this name, this is probably where "they" try to shake you out. They are not shaking me out. (BTW, AMD, NVDA and GOOGL are holdings of Jim Cramer's Action Alerts PLUS charitable trust.)

Note: Your all-time favorite best pal is going to be out next week. Market Recon resumes (God willing) on Monday, June 28, 2021.

No significant quarterly financial results scheduled for release this day.

(GOOGL, CRM, NVDA and AMD are holdings in Jim Cramer's Action Alerts PLUS member club. Want to be alerted before Jim Cramer buys or sells these stocks? Learn more now.)