In retrospect, on Tuesday morning when one looks back 24 hours, though seemingly equity markets did show some resilience, I don't really like what I see all that much. I know, the headline-level large-cap equity indices all came off early lows to close at better levels. Even that was deceptive though in a way, though. The main story, in my opinion, unfolded along with the passing hours on Monday, and continues throughout the overnight. The ending of this tale perhaps remains far from untold.

We might note a Dow Jones Industrial Average that managed to eek out a 0.3% increase despite the 2.3% gain that investors showered upon Boeing (BA) after Southwest Airlines (LUV) confirmed a large order for both versions of the now infamous 737 MAX aircraft. We must also note an S&P 500 that literally went nowhere, and a Nasdaq Composite that moved lower (-0.6%), but vastly underperformed it's cousin, the Nasdaq 100 (-0.1%), as the 100 represents the Nasdaq's 100 largest non-financial listings, and it was the banks that took perhaps the day's most severe beating in the wake of the epic Archegos Capital Management margin call.

Just an FYI, breadth was rather awful across both of New York's primary equity exchanges on Monday, but on the bright side, aggregate trading volume was significantly lighter at both exchanges Monday relative to both Friday and 50-day trends. Sometimes lower trading volumes on a rather mundane day render that day's results almost meaningless. I am not so sure that this was, or is the case. There was almost an aggressive move Monday across the longer end of the Treasury security maturity curve.

Readers will see that the yield on the U.S. 10-Year Note increased on Monday back toward the highs of mid-March and has reached for even higher highs overnight as, globally, traders have kept the pressure on th U.S. long end. At about 15 minutes short of 05:00 (5 a.m.) in N.Y., the 10-year pays more than 1.77%, and is already engaged in a third attempt at 1.78% support over the past hour or so. Readers should be fully cognizant that pressure on the long end of the curve played out as weakness in small-to mid-cap stocks on Monday, as the Russell 2000 (-2.8%) was decisively beaten back at its 50-day simple moving average (SMA).

Not only is this morning's 1.78% tick on the 10-Year, the apex for this particular yield (or lowest point for the 10-Year Note itself) since January of 2020, there has also been unmistakeable support for the U.S. dollar in forex markets for about a week and a half now. The U.S. Dollar Index has poked its head above the 93 level as the wee hours have passed. This combination has put an overnight wobble in both Nasdaq futures markets as well as commodity prices.

Is the fallout of the whole Archegos Capital blow up over? That's almost impossible to know for sure, but I do find it encouraging that an attempt by Credit Suisse (CS) to socialize the losses across the impacted "banks" seems to have been spurned by those that felt they could get out without material losses.

Will there be regulatory intervention to draw back on leverage? Only if another fund or two happens to blow up similarly and, in my opinion, that negative impact due to extended leverage is felt among banks that do a large consumer or community business. The two largest U.S. "banks" that seem to have been active here, Goldman Sachs (GS)  and Morgan Stanley (MS)  , are both thought of as investment banks. Nobody cashes their paycheck at their local Goldman Sachs branch, or reaches out to Morgan Stanley to refinance their mortgage. While banks such as JPMorgan Chase (JPM) , Citigroup (C) , and Bank of America (BAC) are indeed all investment banks, they all run large consumer businesses, and we have not heard hide nor hair from any of them as having been participants since this began last week... which is a good thing.

You all know if you read Real Money that I took the other of both the Discovery (DISCA) , and ViacomCBS (VIAC) trades in my own small way in an early Monday trade. Though I have traded in and out of both of those names, I still come into Tuesday long a few shares of both. At least so far, these are both successful trades, and "trading" is exactly how I look at them both.

I do not consider myself an investor in either. It's an ego thing. I just know that I can almost always beat these "block traders" at their own game. Most of them weren't even born when block trading was a real sport -- back before anyone even thought of having "risk managers," it was DIY. I know how they operate, and I will bet on myself 100 times out of 100 versus this crew.

Fear? Fear is but for the wicked. "They" will fear for their jobs. I will not. I'd rather haul cement than work for any premier investment bank the way they are set up in this modern era. Pride? Maybe a little. Emotion? Definitely a mistake. Unless it lights a fire. Sometimes. It does light that match.

Readers want to know how to spot a "clown" on financial TV? (I'm going off on a tangent.)

I heard it again on Monday afternoon. A supposed "trader" said that he "liked" both DISCA and VIAB "down here." Um... calling BS. You don't "like'' a name if you are a trader, you either bought the name or you are working on a strategy on how to acquire that name either at a discount or on momentum. Enough with the bologna, already.

Either you trade these markets or you have something to sell. Period. You did not mention buying something you like, therefore, in my eye, you are a salesperson.

Being I don't ever try to sell you anything, why do I do financial TV? One reason and one reason only. Because it makes my parents proud, and I love them. That is it. I don't even take new money, or respond to job offers when folks ask, as flattering as that is. I like working for me. I did not like working for others when I had to. Nor even for clients. Though I really do appreciate those emails. Honestly, thank you.

I think that one of the best things about being more politically moderate than most folks I know these days is that I can take what I like from each side, while also disliking certain things about both sides.

I can like that former director of the CDC Robert Redfield feels free to speak his mind. Is he right, that human hands may have modified the SARS-CoV-2 coronavirus? I don't think he even knows, but I certainly respect that, unshackled from the chains of the political machine, he is speaking out. I know that this virus does not feel like anything created by either God or nature while you are sick.

I also can appreciate and find quite likeable, the obvious humanity in current CDC Director Rochelle Walensky. How does the heart and soul not respond to a leader who says, "We have so much to look forward to, so much promise and potential of where we are, and so much reason for hope... but right now, I'm scared."

You see the Spring Break crowds tearing up the streets in party towns down in warmer climes? So little regard for others. Such a lack of situational awareness. Please, oh please, do not let this crop of whatever they are... become what leads this nation down the next road. Please no... and yes, I like Walensky.

To Infinity and Beyond

We all knew that the order book had been building of late. The stock put in the second low of what looks like a "double bottom" last week.

The good news kept on coming on Monday. We speak of Kratos Defense & Security (KTOS) , the on again, off again Sarge fave that has long been recognized simply as "the drone guys."

Early on Monday morning, the stock started moving. The American Society of Civil Engineers had recognized the firm's "Autonomous Truck-Mounted Attenuator," which is a driverless version of a mobile crash barrier, as an "Infrastructure Gamechanger." High honor for a potential commercial use of Kratos technology.

We alson all knew that Cathie Woods' operation over at Ark Invest (ARKK) was building a Space & Exploration ETF that will begin trading today (Tuesday) under the ticker symbol "ARKX." Ark Invest has released the fund's holdings and the weighting on the fund of those holdings. There were some no-brainers, and there were some surprises. I fully expected that Kratos would be on the list.

I honestly had no idea that by weight, KTOS would be the fund's third largest holding at 5.62%. Number one is Trimble Inc (TRMB) at 8.47%. That said, KTOS stands at a higher weighting than some names that we probably expected to see above Kratos on this list. Those names include L3Harris (LHX) , Lockheed Martin (LMT) , Boeing, and Nvidia (NVDA) .

One name that I did not expect to see at all, but stands at number 13 of 39 positions, at a weighting of 3.18%, is Deere (DE) . I've heard of space cowboys. Space farmers? Maybe. Someday. 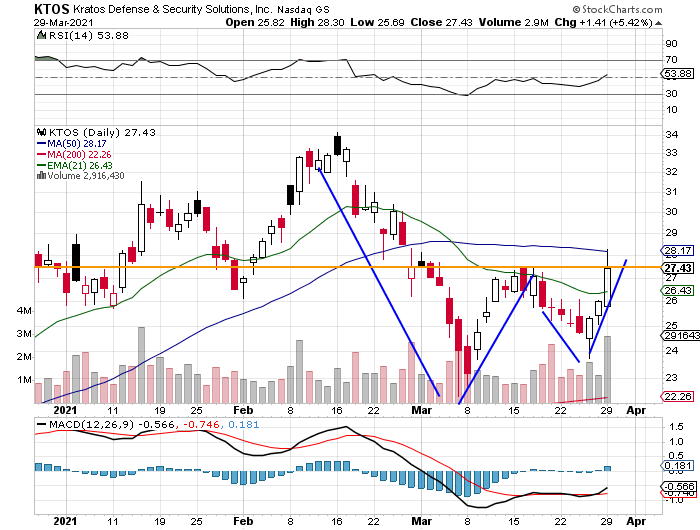 I want readers here to focus on a couple of things that I think I see. One, the "double bottom" is there, though small. It does come on the tail end of a selloff of almost 35%, so this is a perfect setup in my opinion. Both Relative Strength and the daily Moving average Convergence Divergence (MACD) appear to be well positioned to accept an inflow of capital. Again, my opinion.

The pivot will be the high point of the middle of the "W," so here that spot is $27.43. Oh look, that is precisely where the stock closed on Monday... to the penny.

The stock had met stiff resistance on Monday at its own 50-day SMA (now $28.17)... but wait... the ARKX portfolio was released after Monday's closing bell. Correct my young padawan. We see the stock trading around the $29 level as the earliest streaks of light appear to the east. (My office window faces east.).

Get an email alert each time I write an article for Real Money. Click the "+Follow" next to my byline to this article.
TAGS: Futures | Indexes | Investing | Markets | Rates and Bonds | Small Cap | Stocks | Trading | Treasury Bonds | Coronavirus