What will become of this day (Friday) soon will be determined. As the zero hours pass, that is indeed always the case.

This time, though, there are so many ways for the road to turn, all of them quite significant going forward. All eyes started out watching for the July employment situation; at 08:30 ET the Bureau of Labor Statistics will release all of that survey-based data. Today is indeed Jobs Day, and no, the ADP report on Wednesday nor the weekly jobless claims information did anything to remove the uncertainty swirling around these numbers ahead of time.

It would be nice, very nice in fact, if after all was said and done this day might be remembered more as a "deal day" than "jobs day." Equity markets have turned in what at least at the headline level appears to be a nice winning streak as investors have anticipated the congressional wrestling match over this next-phase fiscal support package to progress a little more smoothly than it appears to be doing. Today actually is the artificial deadline set by the players at hand so that there could be an executive signature on a (complex) bill by next week. There is scuttlebutt that if the Democrats in the House, Republicans in the Senate and those representing the administration cannot get their ducks in a row, that the president may do something along the lines of an executive order to boost state-level jobless benefits, replacing the federal stipend that expired last week.

Honestly, equity markets acted as if they were a little tired on Thursday. The U.S. dollar appeared to find some support. The U.S. 10-year Treasury note seemed to maybe hit some resistance. Oil prices eased. Gold and silver hit highs and then relaxed. The Nasdaq Composite soared well past the 11,000 mark, hitting yet another record close and extending an incredible winning streak to seven sessions. This, while the S&P 500 managed a fifth consecutive up day and neared an all-time high of its own.

Do you trust this? I mean really, really trust this upward momentum here? Longer term, given the monetary and (probable) fiscal backdrop? I think for those who do not play this game day by day, you need to believe that greatly expanded money supply coupled with artificially low interest rates is the recipe for higher multiples. So, in those terms, yes. At least until consumer-level inflation becomes more visible and raising interest rates off the "zero" boundary becomes the best or maybe only way to try to contain it.

That said, current prices will be extremely sensitive to headline risk, and it will not take much to get at least some managers to protect profits at these levels. Readers will note that that breadth on Thursday was not all that fantastic even though the broader equity indices all closed at or near the highs of the day.

The Transports had a nice day, but this time the small-caps did not join them. The Communications Services sector led the way, and that sector was led by the Internet (think Facebook (FB) ). The Information Technology sector finished in second place for the day, and then there was a significant tailing off after that. By the way, Hardware led that group (read: Apple (AAPL) ), and software pushed the sector to where it went. Even the semiconductors stalled.

The fact is that on Thursday losers outnumbered winners at both the New York Stock Exchange and the Nasdaq Market Site, while trading volume decreased not only at both exchanges but also across the constituencies of the S&P 500 and Nasdaq Composite as well. In other words, Thursday's rally was narrow in scope. Nuff said.

Oh, this was an active evening. Did anyone ever think that re-imposing aluminum tariffs on Canada so soon after implementing the U.S.-Canada-Mexico (USMCA) trade agreement would hardly make headlines? Simply put, there are bigger fish to fry, and that's a fact, Jack.

Thursday night, President Trump basically graced, in the form of two executive orders, U.S. companies with 45 days to stop all dealings with TikTok owner ByteDance and the WeChat app that is owned by Tencent. The bans are explained as the clamping down on technologies that pose economic and national security threats to the U.S. The Secretary of Commerce (Wilbur Ross) is to define what the ban actually is in detail while the pressure is on for any U.S. concern, such as Microsoft (MSFT) , to work out a deal where TikTok, at least outside of China comes under non-Chinese control. Shares of Tencent sold off more than 10% (at the low) in Hong Kong overnight.

TikTok, by the way, has 100 million users in the U.S. alone and at least 50 million active users according to the most recent weekly data available. These are valuable properties. I don't see numbers for WeChat, but I do know that when I used to appear on Chinese financial television just about every Chinese reporter that I worked with communicated through WeChat and asked those Americans on the interview circuit to join as well.

Think the president's pen stops there? Not likely if Congress cannot get its act together on fiscal support for the economy. Potential executive orders apparently are being prepared that not only would extend jobless benefits but also possibly extend protection to those facing eviction or to those unable to service student loans. Then there's the payroll tax cut that seems to come up oh so often.

Doesn't a compromise on Capitol Hill just seem so much easier and a win for all involved? Not if one side or the other sees a chance to paint the opposition as villainous. That's the climate we are in. Just thinking out loud again.

Remember Datadog Inc. (DDOG) . The shares have moved sideways for roughly six weeks now after an incredible run this past spring. Is it time to take a bite out of this one?

For the second quarter, Datadog reported adjusted earnings per share of $0.05 and even GAAP EPS that broke even at $0.00. By either metric, Datadog beat the street. Revenues landed at $140 million. That number beat, and growth seems robust at 68.2%. However, this pace of growth is a deceleration, and is the slowest pace we have seen since the firm went public.

The slower pace of growth and the acknowledgement on Thursday night by CEO Olivier Pomel in writing that the "current macro environment has caused business pressures for our customers" may be all that some managers needed to hear to take some profits off the table. It may not matter for now that the rest of Pomel's sentence reads, "We expect it to accelerate digital transformation and cloud migration over the long term."

Datadog did impress this investor. Operating and Free Cash flows were decisively positive. For the quarter, the number of customers worth at least $100,000 in annual recurring revenue to the firm grew to 1,015, up from 594 (+71%) over a year's time. 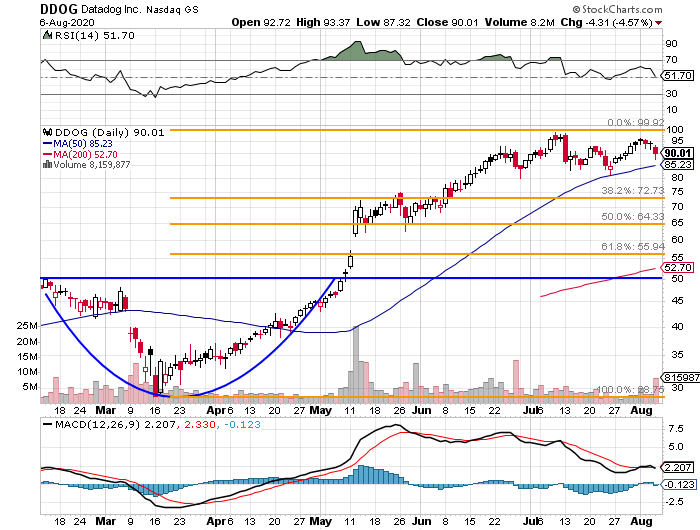 What do I think? Overnight, I see the shares trading with an $82 handle. Whether the shares open above or below the 50-day simple moving average (SMA) of close to $85 will matter technically. So will broader flows of capital that will hit the marketplace for political or economic reasons today but have nothing to do with this stock. My thinking is that for my personal account I am likely to buy (small) below that 50-day line and get far more aggressive should the shares start testing Fibonacci levels upon broader market weakness.

If we see that weakness, I am an investor. Should we not see the deeper pressure, I am just a trader. I am completely fine and my weekend will not be ruined either way. Understand?

Get an email alert each time I write an article for Real Money. Click the "+Follow" next to my byline to this article.
TAGS: Earnings | Fundamental Analysis | Indexes | Investing | Markets | Politics | Stocks | Software & Services | Real Money | Coronavirus