Antero Resources Corp. (AR) is an independent oil and natural gas company engaged in the exploration, development, and production of natural gas, NGLs, and oil properties located in the Appalachian Basin. Hedge fund manager David Tepper has a long position in the company so I wondered what the charts looked like.

In the daily bar chart of AR, below, we can see that the shares have been trading sideways in a long triangle-looking pattern since May. Prices have made lower highs and higher lows and now it looks like we have reached an apex.

Trading volume has been mostly neutral looking but the daily On-Balance-Volume (OBV) line shows us an upward trend the past 12 months, telling us that buyers of AR have been more aggressive than sellers. Prices have made several tests of the rising 200-day moving average line since late September.

The Moving Average Convergence Divergence (MACD) oscillator has moved around the zero line and is just slightly above it now.

In the weekly Japanese candlestick chart of AR, below, we can see a major uptrend over the past three years. The shares emerged from a bottom or base pattern below $5 and have rallied into the $45-$50 area before turning sideways. A large equilateral pattern is visible (use your imagination). Prices are hugging the rising 40-week moving average line.
The trading volume has declined during the triangle pattern and that is normal. The weekly OBV line has been steady the past six months. The MACD oscillator is still above the zero line and has narrowed sharply and could soon cross to the upside for a new outright buy signal.

In this daily Point and Figure chart of AR, below, we can see a possible downside price target of $34 but we can also see that a trade at $37.48 or higher could start to turn the chart bullish. 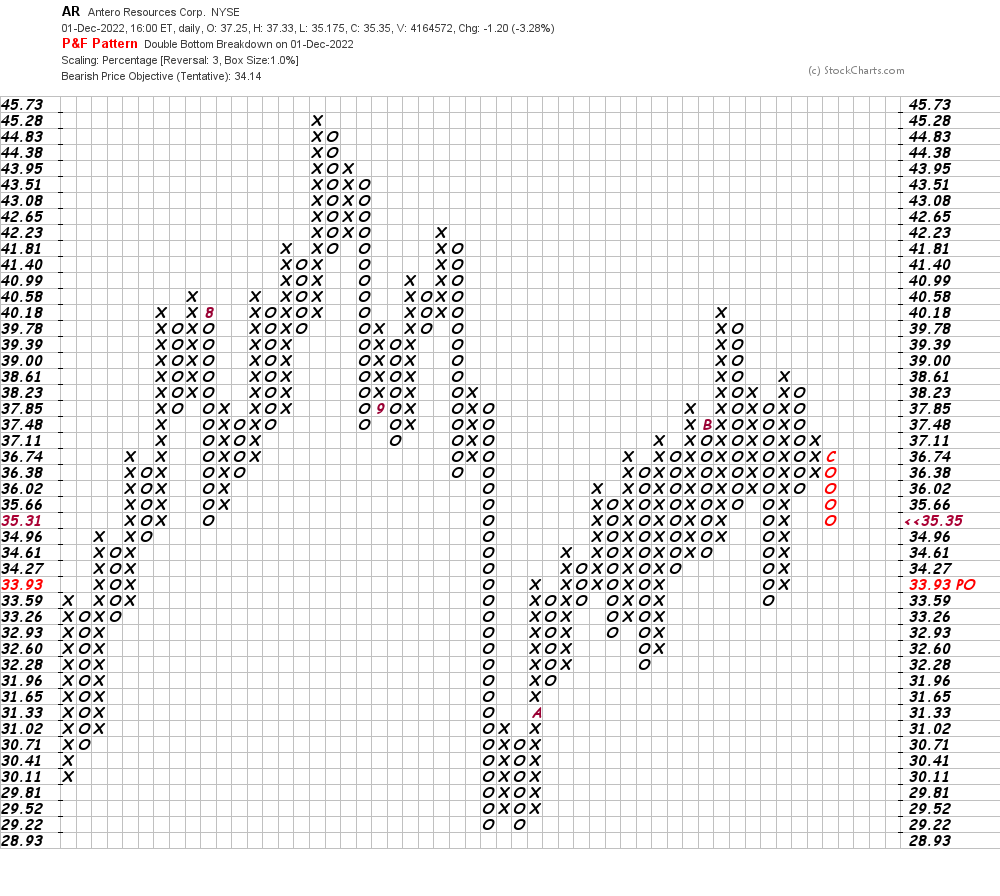 Bottom-line strategy: AR looks more than ready for a breakout. Traders should only buy strength above $39 and then risk to $34.
Get an email alert each time I write an article for Real Money. Click the "+Follow" next to my byline to this article.
TAGS: Hedge Funds | Investing | Stocks | Technical Analysis | Energy | Natural Gas |