While we are unwilling to fight the current uptrend, the data continue to suggest a fairly high level of risk currently exists that could result in sudden and notable downdrafts. Chasing price could prove regrettable while new purchases should be limited to issues not extended in valuation or price.

The major equity indices all closed higher Tuesday and at or near their intraday highs. Internals were positive on the NYSE and Nasdaq. 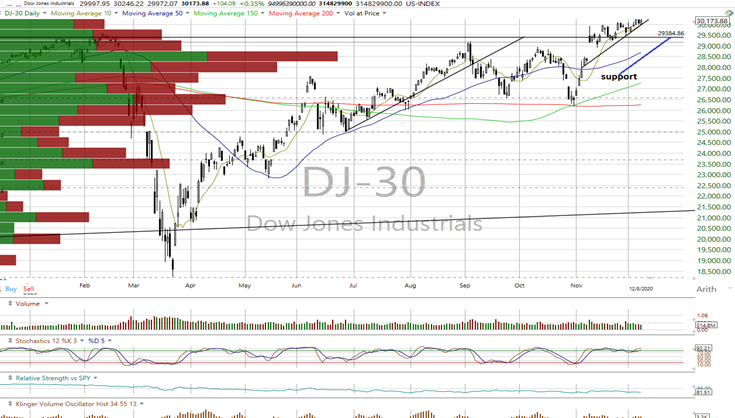 All but the DJIA (see above) managed to post new closing highs as the near-term uptrends remain intact across the board.

Breadth remains positive as well with the cumulative advance/decline lines for the All Exchange, NYSE and Nasdaq bullish and above their 50-day moving averages.

We have yet to see any sell signals generated on the charts and continue to believe said trends should continue to be respected until proven otherwise.

Stochastic levels are in the 90s on all but have yet to trigger bearish crossover signals.

On the Other Hand...

The data continue to have us looking over our shoulder.

The one-day McClellan Overbought/Oversold Oscillators are back at overbought levels on the All Exchange, NYSE and Nasdaq (All Exchange: +57.68 NYSE: +55.87 NASDAQ: +58.68).

But it is psychology and valuation that are our greatest concerns. The Open Insider Buy/Sell Ratio remains just shy of bearish levels at 29.2 as they have largely been sellers over the past few weeks.

While not an effective "timing tool," this setup has historically been associated with market tops. 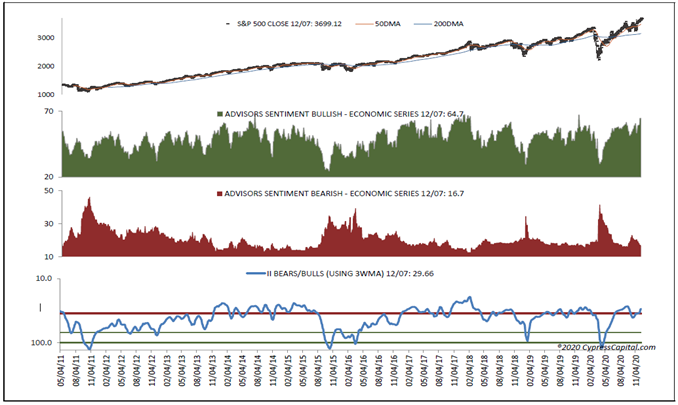 Tuesday's Investors Intelligence Bear/Bull Ratio (contrary indicator, see above) saw yet another decline in bearish advisors as bullish sentiment increased and remains in bearish territory at 16.7/64.7.

While the charts remain bullish, psychology and valuation are at levels that have frequently resulted in sudden and sharp market corrections. Thus, we remain "neutral" in our near-term outlook.

With XL Fleet, Options Are Your Friend in Order to Define Risk

If the market stabilizes, I believe XL could excel to the upside.

Ring the Cowbell: Here Are Three Ways to Play the Jittery Market

Let's look at the move in bonds, how it will lead stocks -- and load the deck with some 'b-sides.'