The charts of the major equity indices have seen further technical damage while cumulative breadth deteriorates. With that said, the data are suggesting a bounce in the markets over the near term while some psychology data have taken a slightly encouraging turn. The question, however, is whether or not it will be sustainable.

That has yet to be determined. 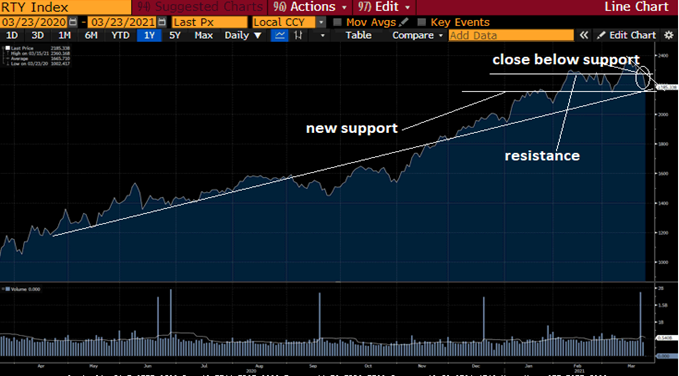 All the major equity indices closed lower Tuesday with broadly negative internals and heavier trading volume. All closed at or near their intraday lows.

Meanwhile, the Dow Jones Transports and MidCap 400 closed below their near-term uptrend lines and are now neutral.

So, regarding trend, the S&P 500 and Value Line index remain positive with the Russell negative and the rest neutral.

Cumulative breadth turned negative on the All Exchange, NYSE and Nasdaq. However, as breadth has deteriorated in a declining market, we view the action as a lagging indicator in this case.

The McClellan one-day Overbought/Oversold Oscillators are now suggesting a bounce as all are oversold (All Exchange: -74.6 NYSE: -73.83 Nasdaq: -75.3).

The Rydex Ratio (contrarian indicator) measuring the action of the leveraged ETF traders remains neutral at 0.58 but implies those traders actually started putting on some leveraged short exposure.

In contrast, the Open Insider Buy/Sell Ratio up ticked to 30.8. While it remains neutral, it indicates insiders saw a slight increase in their appetite to buy their own stock.

This week's Investors Intelligence Bear/Bull Ratio (contrary indicator) changed slightly to a mildly bearish 19.6/55.9 from its prior bearish level. Their overly optimistic expectations have moderated slightly. It is a welcome change, in our opinion, but not a game changer at this point.

Valuation still appears extended with the forward 12-month consensus earnings estimate for the S&P 500 from Bloomberg dipping to $174.50 per share, leaving the S&P's forward P/E multiple at 22.4x while the "rule of 20" finds fair value at 18.4x. We reiterate the valuation spread has been consistently wide over the past several months while the forward estimates have risen rather consistently.

The 10-year Treasury yield dipped to 1.64% but remains in a short-term uptrend. We continue to monitor it closely as it has been having rather significant influence on the equity markets of late.

While the charts have taken on some damage, the data are now suggesting some relief from the recent market weakness. However, it is too early to project if said relief is sustainable. We remain "neutral."