Santa and his economic elves came a tad earlier than usual this holiday season, bringing several flash pieces of December Purchasing Managers' Index data from IHS Markit. Before we get granular with the reports for three of the four global economic horsemen that are the U.S., Eurozone and Japan, we would quickly sum up the findings as confirming that not only is the U.S. economy still the best economic house on the block, but the pace of the U.S. economy has actually picked up the closer we get to the end of the year.

Before anyone jumps the gun, the data didn't suggest the U.S. economy is on fire, but rather it continues to grow its Gross Domestic Product at around the 2% pace, putting further distance from the impending recession talk that was had several months ago. And, as you'll see, there is reason to think U.S. holiday retail shopping may not meet expectations laid out earlier by the National Retail Federation.

Data out Monday, along with the U.S.-China "phase one" trade deal, is leading some on Wall Street to call for a first quarter 2020 melt up in equities. Others, such as Oxford Economics and its slowing US Economic Momentum Indicator, continue to warn of a slowing global economy in 2020. What we saw in the December Flash IHS data for the Eurozone and Japan, certainly points to that. The picture for that slowing global economy is also reinforced by reports China will trim its 2020 economic growth target to "around 6%" in 2020, down from this year's 6%-6.5%. We continue to think 2020 EPS expectations for the S&P 500 will be one of, if not the factor, to watch in the coming weeks as companies begin reporting their December 2019 quarterly results soon after the New Year holiday.

Before we dig into the data, let's first set the stage by looking at the latest U.S. GDP forecasts from both the Atlanta Fed and the York Fed. As of Dec. 13, the Atlanta Fed sees December quarter GDP coming in at 2.0%, unchanged from the prior week, while the New York Fed is forecasting a more subdued 0.7% for the December-ending quarter, with a modest uptick to 0.8% in the March 2020 quarter. Despite that modest pickup, it pales in comparison to the GDP print near 2.5% in the first half of 2019 and the expected third revision to September 2019 GPD of 2.0% that we'll get on Friday (December 20).

Now let's get to the data:

Japan's Jibun Bank Manufacturing PMI for December dropped to 48.8 from 48.9, but was better than the expected 48.4. Services rose to 50.6 from 50.3 with the overall Composite PMI remaining flat at 49.8. In full, the December data along with that from October and November suggest Japan's economy could dip into contraction territory for the December quarter. 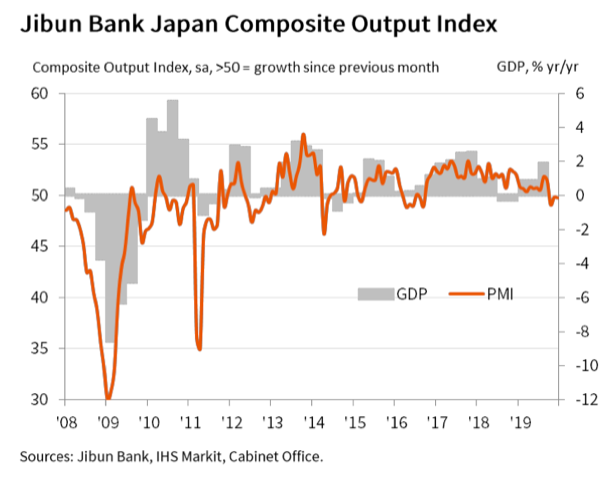 Overall, the Eurozone Markit Manufacturing Flash PMI for December was weaker than expected at 45.9 from 46.9 in November, and compared to 47.3 consensus expectation. The Flash Services PMI was stronger than expected at 52.4, up from 51.9 and beating consensus for 52. The push-pull of those two index constituents led the Flash December Composite PMI Index to be unchanged month over month. Flash New Order activity rose marginally compared to November, leading backlogs of work to fall for a tenth straight month. 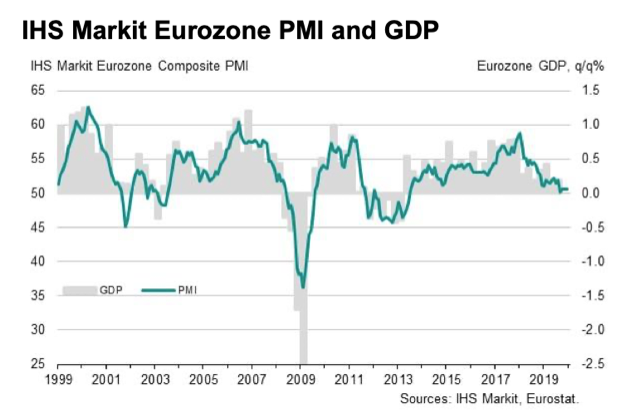 IHS Markit's Flash December U.S. Composite Index hit 52.2 up a few ticks from 52.0 in November, marking a five-month high. The index was led by the sequential improvement in the services sector, while the Flash Manufacturing PMI reading for November dipped a hair month-over-month. Per the report, "a further solid rise in manufacturing new orders, albeit one that was slower than that seen in November" was had, which points to continued growth ahead. We'll look for confirmation from the December ISM Manufacturing and Services data to be had in early January. 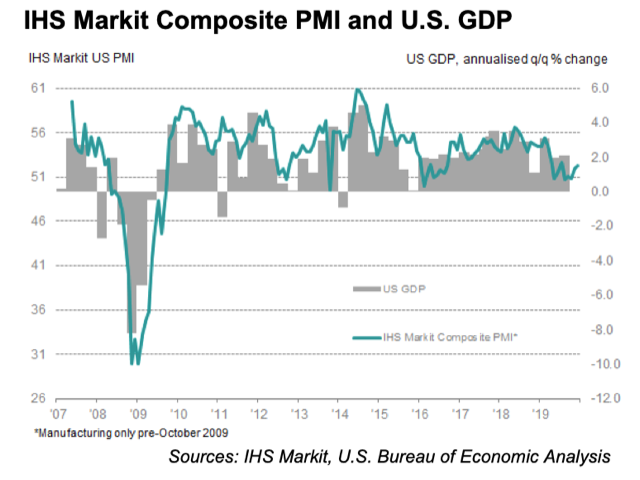 In the meantime, we expect investors will remain focused on the 2019 holiday shopping season and with good reason. According to new data from MasterCard (MA) Spending Pulse, total retail sales over Nov. 1 to Dec. 6 are up 3%, which is tracking with MasterCard's 2019 holiday forecast that is looking for overall holiday sales to rise 3.1% year-over-year. That's on the back of a disappointing headline from the November Retail Sales Report that is bound to raise questions over the National Retail Federation's 2019 holiday shopping forecast that is looking for holiday sales in November and December to climb 3.8%-4.2% year-over-year.

Given the compressed holiday shopping season, we could see a late shopping push this year. That said, on one of Christopher Versace's holiday shopping mall walks last night, he did see quite a bit of amped up sales and discounts compared to just a handful of days ago. As we take note of those signs, let's remember those discounts might convert shoppers to buyers, but they will also weigh on margins and EPS.

This commentary was originally sent to subscribers of Trifecta Stocks. Click here to learn more about this portfolio, trading ideas and market commentary product.

Get an email alert each time I write an article for Real Money. Click the "+Follow" next to my byline to this article.
TAGS: Economic Data | Economy | Investing | Stocks | Europe | Japan

I Think It's Okay to Be Long Home Depot Here

You think people aren't going to fix up their yards, their basements, the roofs? Oh, they will.

This does not look like the time to gamble on a rally.

What's Next for This Market? What the Charts and Data Are Saying

Sector performance appears to be shifting.

I continue to believe that smaller cities will be huge winners in coming years as technology enables virtual work forces.