Still waters. Barely a ripple. Oh, financial markets were open for business. For the most part, there was not a lot of movement on Wednesday. Unless one trades bitcoin. Bitcoin was hot as heck on Wednesday, and heated up even more overnight. Gold is starting to warm up again too. Of course these moves are in dollar terms and the U.S. dollar is a cold fish right now.

At the headline level, both the S&P 500 and Dow Jones Industrials closed within whiskers of the unchanged mark. The Nasdaq Composite as well as the Nasdaq 100 squeezed out increases of half of one percent, while one small-cap index (the S&P 600) gave up that much. Breadth told no tale either. Losers just barely beat winners at both of New York's primary exchanges. Trading volume was relatively flat. Declining volume edged advancing volume downtown, while the reverse was true up at Times Square.

Anyone who's spent time out in the swampy areas of the Southeast U.S. knows that still waters often hide from view any immediate or overt danger. Sure, you'll run into gators, sometimes a whole lot of them. As long as you stay alert, though, gators are not really that scary. I mean don't fall asleep on the ground, but they really don't want to fight a full-sized human.

Now, the water moccasin? That's a horse, or a beast of different color. Generally speaking, there's a good chance you won't see one. They're camouflaged in the murky, muddy water's edge. You're walking in the shallows, trying not to leave tracks, and then it happens. Somebody yells something we can not publish here, and his buddy yells "Corpsman (Medic) up." Better know your "nine line," or at least have it all written down somewhere. You may not be the kid just bitten by that viper, but you just might be the kid in charge.

A quiet disappointment seemed to fall over Wall Street Wednesday afternoon. Equity index futures are acting a bit more receptive overnight, however. It appears to me that too many folks expected more action than words from the Fed on Wednesday.

I wrote to you how I feel 24 hours ago. I think this FOMC, under this leadership, has done, and is doing the job the right way. I told you that I would, if handed a leadership role at the FOMC, probably draw back on the $40 billion per month in purchases of mortgage-backed securities. I also indicated that I would either leave the purchase of Treasury securities at $80 billion or add to that number whatever I pulled away from MBS, hence leaving the entire 'QE" program at $120 billion per month. This is what the committee decided.

I also warned against intentionally targeting longer-dated maturities, as I see at least for now, more harm in flattening the curve than in anchoring the short end, and then allowing the longer end to if not truly test the waters of free market pricing, at least trade more freely than if strict control over the slope of the curve were to be enforced. I can't speak for 2021, but at least ahead of a transfer of power, amid fiscal uncertainty, the Fed for now agrees.

Understand, the Fed did not "not act" on Wednesday. This Fed extended the intent to purchase this $120 billion in monthly assets out until "substantial further progress has been made toward the committee's maximum employment and price stability goals." They might as well have said indefinitely, or used the word "infinity" as guidance.

This is money creation, folks, this grows the monetary base, significantly every single month. The Fed also extended its temporary dollar swap lines and repurchase facility out past expiration, which had been this coming March.

So, why did the FOMC maintain course without committing to even more asset purchasing, or change course on targeting longer-term interest rates. First up, would be the inability for Congress to act. The likelihood that the four leaders, Speaker Pelosi, Sens. McConnell and Schumer and Rep. McCarthy, are probably going to agree on a smallish fiscal package this week in order to keep the government open for business while getting at least some help out to the masses, will certainly leave the table with all parties involved dissatisfied.

This puts the next House, the next Senate (control still uncertain) and the incoming administration in the awkward position of having to act on probably larger stimulus almost immediately, as by January, there is good chance that the economy will be in worse shape than it is now, but there may be signs that the virus at that point (hopefully) may be in retreat. They are going to have to act with urgency at precisely the right time. This will bloat the supply side of sovereign debt markets, and the Fed will have to decide what it will pay when it adds that debt to its balance sheet.

Let's hope the new leadership at Treasury and leadership at the FOMC understand that in allowing the slope of the curve to assume a more natural shape, conditions may then allow for not just gradual inflation, but economic growth as velocity returns. We already know through the experiences of Europe, Japan, and the Bernanke-led Fed that simply steamrolling longer-term interest rates will certainly create bubbles, while retarding inflation, and badly slowing potential for economic growth, and the natural perception of risk tolerance at both the professional and individual levels.

Never buy into the media driven narrative that the Bernanke-led Fed saved the economy. What that Fed did was ensure that the recovery never came close to reaching its potential.

The Fed's infamous dot plot tells us that in their collective view, they see full-year GDP economic "growth" landing at -2.4%, which is considerably better than the -3.7% that had been their median view in September. The group also sees 2021 GDP at growth of +4.2%, slightly better than the even +4% envisioned three months ago.

Americans need to be fully cognizant of the fact that "they" don't know. Yes, this is optimistic. The fact is that life is unpredictable. Black Swans are unpredictable events that disrupt not just financial markets, but lives. Twelve months ago, I went to my neighbor's New Year's Eve party. I was excited because my wife and I had already made plans to "Meet the Mets" at Spring Training. At about that time, in a city in China that was not on my radar, some guy ate a sick bat, and within months, life would change for the entire human race.

As the vaccine(s) are distributed across the U.S., there will be a burst of economic activity once people feel safe interacting. The newly inaugurated Biden administration is going to have to be on their "A" game. This period may look good statistically, but this will be a time of great economic inefficiency. There will be pent-up demand for goods, services and labor, that will crash upon the shores of pent-up supplies of these goods, services and yes, labor. There will be huge supplies of labor that may last longer than anyone would like. Sometimes waves crashing upon the shore create for the brain an aesthetic beauty. Other times, with no one there to appreciate, the waves do nothing more than erode the beachfront, creating new dangers moving forward.

Napoleon was indeed surprised by the sheer numbers of troops hidden behind the hills at Waterloo. The risks that lie just over the hill, and still invisible to us right now, will include monetary policy changes after the fact. After adjustment becomes necessary. Think it silly? I think it silly that economic projections by professionals run out as far as 2023. We already know that tomorrow does not come with a guarantee. Of course, GDP and Unemployment can not return to trend together without significantly impacting both inflation and short-term interest rates. A high school senior with an interest in economics could tell you that. Yet this is what PhD economists working at the highest level in the field, come up with. Gee, thanks. Guess we'll have to figure this out for ourselves.

Other risks will evolve around bankruptcies created by the pandemic, both at the corporate and household levels, and depending on whether or not the FOMC heeds my free advice, the creation of various asset pricing bubbles -- such as housing, equities and debt securities. This is not really criticism. I think this Fed has been spectacular. After misunderstanding economic conditions in 2018, this Fed really stepped up to the plate in 2020 as a crisis unlike any other in most of our lifetimes changed everything. I just hope they see what I see. As always, I am here to help and I'm good at this stuff.

Just quickly. I know that I have already made you think too much this morning. However, I did notice some items worthy of a mention among some of the names I write about and trade often.

First the good. United Parcel Service (UPS) , Amazon (AMZN) and Microsoft (MSFT) all retook their respective 50-day simple moving averages and accelerated to the upside upon doing so. Of course, I did write a positive piece on UPS on Wednesday. You never know, but all a stock really needs is for a couple of keyword reading algorithms to pick up on something like that.

Now, the bad. Nvidia (NVDA) failed at the 50-day SMA and closed at the bottom of the day's range. Not time to panic, in my opinion, but that's exactly what I'll do down around the $515 level. 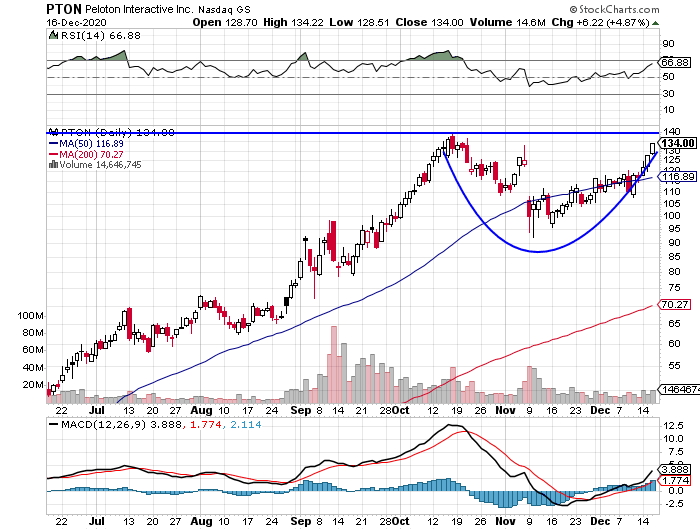 These shares now approach the $139 level. At that point, if this is "just:" a cup, that spot is the pivot, and could catapult the share price as high as $167, in my view. However, there now also grows the possibility of this cup developing a handle. Once it does that, the pivot shifts from the left side of the cup to the right side.

Understand? You better, because the algos do.

(Amazon, UPS, Microsoft, and Nvidia are holdings in Jim Cramer's Action Alerts PLUS member club. Want to be alerted before Jim Cramer buys or sells these stocks? Learn more now.)

Get an email alert each time I write an article for Real Money. Click the "+Follow" next to my byline to this article.
TAGS: Federal Reserve | Futures | Investing | Markets | Stocks | Trading | Coronavirus