"Beware lest you lose the substance by grasping at the shadow."

Traders have become enthralled with the ability to create short-term volatility, in some cases extreme short-term volatility in a limited but growing number of stocks. The formula seems simple enough. Identify a relatively low-priced (not necessarily cheap, that's different) stock, with a particularly elevated short interest, and talk about it. Anywhere.

Anywhere? Well, somewhere in print where it will be seen at least by human eyeballs seeking such information, but more significantly, by high-speed algorithms that will provide the pop as well as create momentum as much as anything or anyone else.

Some have been knocked for referring to the "meme trading crowd" as having fun. Knock it if you choose, but this is the fad of the moment and day-trading these stocks is indeed fun. Just know enough to take it for what it is. Know shadow from substance. This is a way to try to drive a little extra revenue during the day, for the worm turns in both directions and these stocks will only provide windfall gains for a few, while others pay higher prices than they would have liked or will like in a minute, in an hour, or tomorrow. HOLD if you like. I would rather ring the register more often. I will take the higher batting average over the home run in these stocks.

I do not condemn "shadow dancing" with the meme stocks. I hear the arrogance in some fin-media guests who in some cases don't even trade, never mind day-trade. I giggle when I hear "we like" instead of "I bought" or "we see" instead of "I think." Pay attention; you'll realize that you at home trade more of your own money in one day than some of these palookas ever have. In their lives.

Let's get back on track. Just know and be fully cognizant that the more demand that the "crowd" shows for anything usually results in a scarcity on the other side of that issue. Know that down the road, perhaps sooner than anyone thinks, will be a real scarcity of massed short positions used as a means of investment. Oh, there will still be those who short stocks as a means of adding liquidity, either to accommodate a large client or at a specific point of sale in order to offset split-second order imbalances. But reportable short interest as a percentage of any given stock's float? Not if it's an invitation to getting your face ripped off.

I have always taught my young padawans that I became uncomfortable shorting individual stocks as an investment once more than 8% of the float was held in short positions. Now, we have seen six-figure percentages and often see such percentages in multiples of tens. This has become the goose that lays the golden eggs. It is either greed or ignorance that has led to those (hedge funds) shorting these names to pile on long after any careful investor would have backed off, unless a reasonable hedge (not always likely) could in some way be had. It is also either greed or ignorance (and in some cases inexperience) for those now engaged in this game to seek and destroy short sellers wherever they mass. (BTW, the lack of talent at some of these funds is simply jarring.)

You may recall one of Aesop's fables. Remember the farmer and his wife who decided to butcher the goose that laid the golden eggs, thinking that there would be much more gold inside the goose? Instead of finding riches, all they did was kill their goose. Greed and ignorance are what will kill this goose. The short sellers will learn. Are learning. After taking their lumps, they will no longer mass. We learned not to group when we were just kids in infantry school. We learned this in the jungle when dealing with killer bees. So it is that these hedgies will learn as well. It is then that this jig will be up. Almost.

Less than a month ago, it was easy to see this equity bull market as gasping for oxygen as the debt market bulls raced for the exits. That was just mid-May. Now, still in early-ish June, most of our large-cap indices, though not leaders, have worked themselves to where they now trade close enough to all-time highs. Yes, driven by bond yields. As recently as May 12, U.S.10-Year paper gave up 1.7%. On Tuesday afternoon, that same U.S. 10-Year Note paid 1.53%, and I did see it trade just above 1.5% at one point early on Wednesday morning.

All this almost suddenly "enhanced environment" for equities comes ahead of the U.S. Treasury Department's monthly 10-Year note "raffle" -- $38 billion -- and ahead of Thursday morning's Consumer Price Index data for May released by the Bureau of Labor Statistics; that CPI number is expected to scare the spit at of you, at least on a year-over-year basis, even if the monthly pace of acceleration to the upside cools just a little bit.

As the yield curve compresses (the above charts the U.S. 10-Year /3-Month yield spread back through May), traders and investors push further into equities as TINA (remember her?) makes sure that you know as a domestic investor facing year-over-year inflation of 4.2% (April) or 4.6% (expected-May) that even a 1.7% yield over 10 years seems rather paltry. (Calling Japan.... about that bridge?)

President Biden and Senator Shelley Capito had nice things to say about each other. It is quite obvious that there is a level of mutual respect between the two. That said, in the end there was no substance and more shadow in their dance. Instead of a $2.3 trillion infrastructure plan, the sides that these two represent could not even meet down around $1 trillion. The president who would most likely not be able to keep 50 Democrats in line with the party will now have to play ball with Sen. Mitt Romney and his band of eight centrist but bipartisan types who are more popular with their party's opposition than they are with their own.. They do, however, have an idea. That counts for something.

More important than the Nasdaq Composite's winning streak has been the broadening of the rally to include, and even be led by, small- to mid-cap stocks. Yes, the meme stocks in large part have led the smaller issues not just north but in trading volume, but it is broader than that. While the crowd has had its fun running back and forth from GameStop (GME) to AMC Entertainment (AMC) and Bed Bath & Beyond (BBBY) , they have spotted new targets in Clover Health (CLOV) , Canoo (GOEV) and Wendy's (WEN) and gunned those names. Do they even know that Wendy's does not have a large (4% of the float) short position? Doesn't matter. The name was mentioned in a chat room, and looking up short interest would take a few seconds. I don't mind. I am long this name because I like their hamburgers. 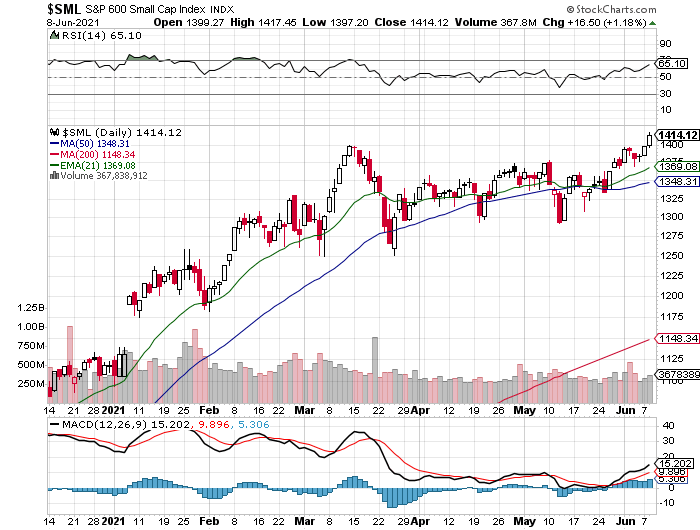 Already there and not even technically overbought. Neat. Oh, by the way, GME, AMC and CLOV are all no longer small-caps. Indeed, at these prices, GME and AMC are indeed large-caps. Large-caps without successful underlying businesses, but large- caps just the same.

1) The last sale I see for front-month West Texas Intermediate (WTI) Crude Oil futures is $70.27, having settled above the $70 threshold on Tuesday for the first time since October 2018. Last night, the American Petroleum Institute reported a draw of 2.11 million barrels of oil, the third weekly draw in a row, and the fifth in six weeks. While demand across the U.S., China and Europe continues to normalize, U.S. shale drillers continue to show discipline. How long does that last? Does this Delta variant of COVID that appears to be the scariest yet end up hiding global economic recovery any more than it already has?

2) Speaking of China, the U.S. Senate approved in bipartisan fashion the U.S. Innovation and Competition Act, which means they plan to spend $254 billion on ramping up the nation's ability to compete, especially in technology. The bill, if signed into law, would include $190 billion that would target artificial intelligence and other burgeoning sciences, $54 billion to increase production and research into semiconductors and 5G telecom equipment here at home, and a cool $10 billion that would be meant to create regional hubs for factories or research. My thoughts? Get a couple of your favorite chip stocks and add on dips. My favorites continue to be Nvidia (NVDA) and Advanced Micro Devices (AMD) .