The life sciences stocks have been rallying lately, and while some of that strength has stemmed from market rotations, Jim Cramer says most of the move is coming from solid execution. He recommended Danaher Corp. (DHR) and  Thermo Fisher Scientific (TMO) during his Mad Money program Thursday night. See our story on TMO from this morning here.

Danaher, is a well-run company that has an excellent track record of making smart acquisitions to turn good businesses into great ones according to Cramer. The shares are up 35% for the year.

In the daily bar chart of DHR, below, we can see a sideways consolidation pattern from last June until early February. Prices traded around the $100 level before breaking out on the upside above $110 in late February. Prices gapped higher on heavy volume and continued to rally after the gap. You could consider that a breakaway gap or a runaway gap -- both are bullish.

DHR is above the rising 50-day moving average line after a number of successful tests in April and May. The 200-day average line has had a positive or bullish slope the past year.

The On-Balance-Volume (OBV) line moved sideways with prices but shows a strong advance from February. The new highs on the OBV line confirm the price gains recently. In early June the Moving Average Convergence Divergence (MACD) oscillator turned higher from above the zero line for a fresh go long signal.

In the weekly bar chart of DHR, below, we can see the gains over the past three years. The rising 40-week moving average line has done a good job identifying the bull move.

The weekly OBV line is moderately positive. The MACD oscillator on this longer time frame almost crossed to a take profits sell signal but it has turned up again this month.

In this Point and Figure chart of DHR, below, we can see the uptrend and a nearby price target of $143, but that does not mean that area will become a ceiling. 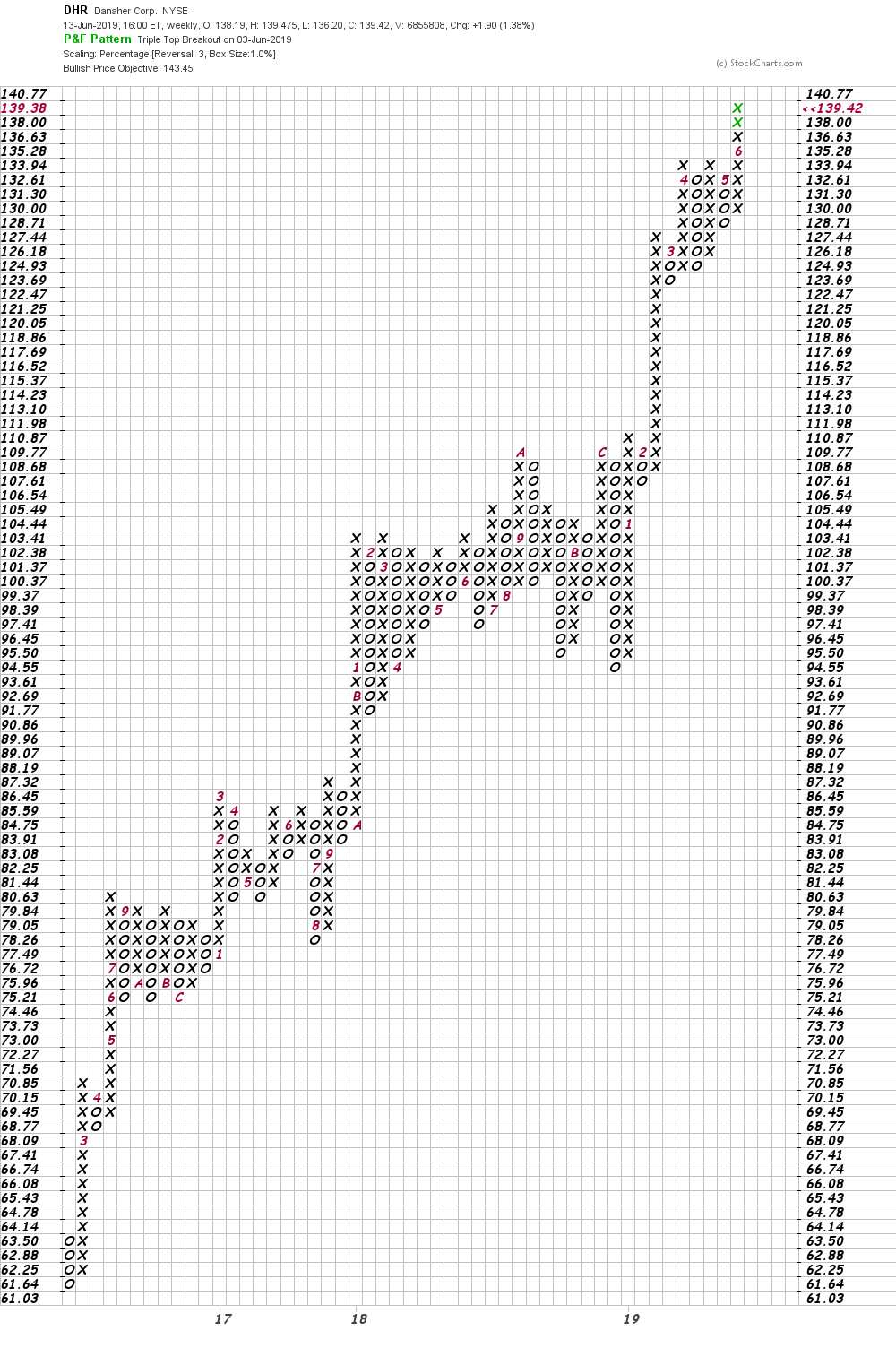 Bottom-line strategy: DHR could pull back and retest the $130 area because of broad market weakness. If you can risk a close below $125 you could go long DHR at $130.

Get an email alert each time I write an article for Real Money. Click the "+Follow" next to my byline to this article.
TAGS: Investing | Stocks | Technical Analysis | Health Care Equipment & Services | Healthcare | Real Money