In the second Executive Decision segment of "Mad Money" Thursday, Jim Cramer sat down with Gary Wojtaszek, president and CEO of CyrusOne Inc. (CONE) , a data center REIT that has seen its shares fall in less than two months from highs near $80 to just $66 Thursday as the market rotates out of growth stocks.

Wojtaszek said despite some reports to the contrary, the data center business is alive and well. He said while some companies are scaling back on their networking spend, other areas such as CPUs and storage continue to grow.

Wojtaszek said CyrusOne is seeing growth in several areas, including the financial sector, and in enterprise overall, where hybrid cloud deployments are becoming more popular. CyrusOne is also seeing strong growth overseas, with sales up 70% in Europe.

Let's check out the charts and indicators of CONE.

In this daily bar chart of CONE, below, we can see that prices have tumbled lower since early October. Prices are approaching a potential support zone (former resistance) in the $64-$56 area from May-July. There was not a lot of volume transacted in that area, so there may not be a line of people looking to go long in that zone. Time will tell. The slope of the 50-day simple moving average line has turned negative, but the slower-to-react 200-day moving average line is still positive.

The daily On-Balance-Volume (OBV) line has turned down with prices the past five weeks or so and tells us that sellers of CONE have been more aggressive. The Moving Average Convergence Divergence (MACD) oscillator has crossed below the zero line this month for an outright sell signal.

In this weekly bar chart of CONE, below, we can see that prices were in a long sideways pattern before they broke out to the upside this September. Prices quickly gave back a large part of their advance and are back down near the top of a large consolidation band. The rising 40-week moving average line could be tested in the weeks ahead. The weekly OBV line has been in a declining phase for over two years and suggests that the current decline may have a lot longer to go. The MACD oscillator has crossed to the downside from above the zero line, generating a take profits sell signal.

In this Point and Figure chart of CONE, below, a potential downside price target of $53 is projected. The potential support zone is also shown. 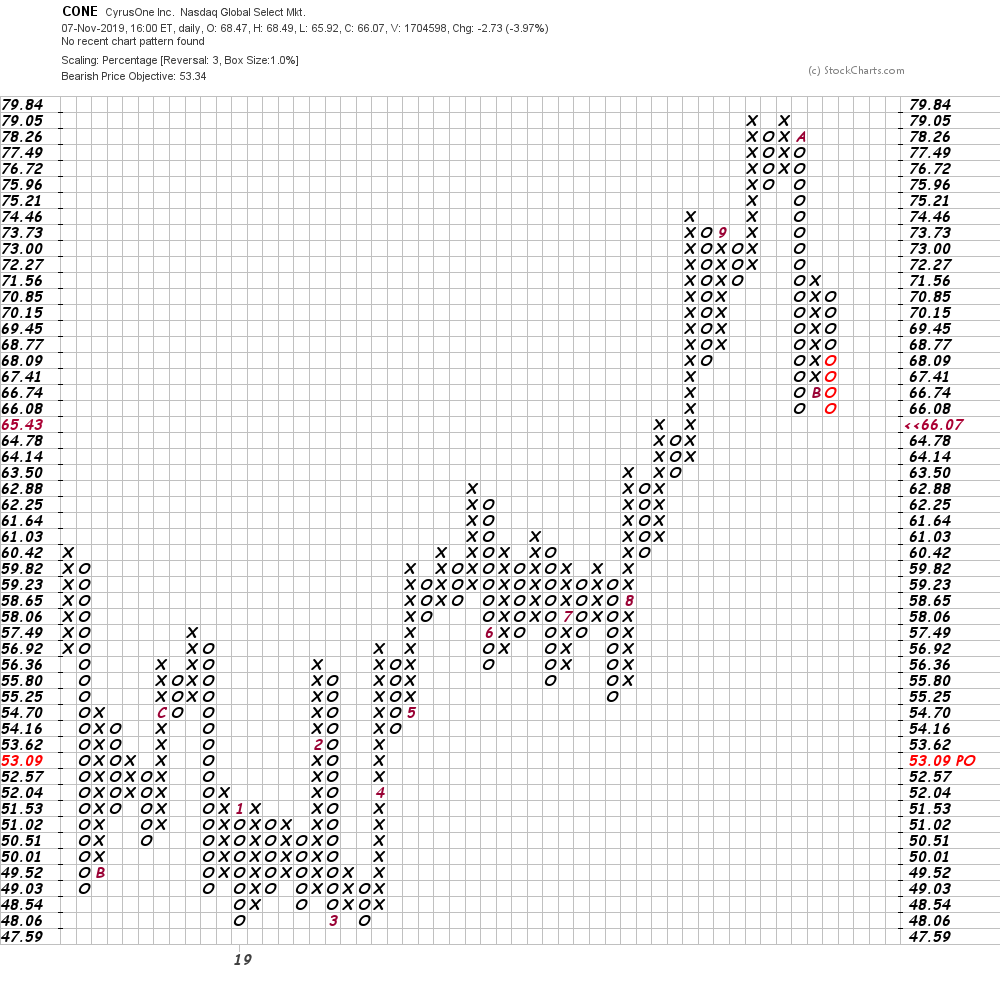 Bottom line strategy: The current decline in CONE is troubling; prices have fallen quickly and potential support on the daily and weekly chart may not materialize because the weekly OBV line shows a long period of aggressive selling. Avoid CONE is my best advice right now.

Jim Cramer: The Market Now Acts Like a Market of Stocks Than a Bushel or a Peck

There was a period before the time of commoditization where individual elan and corporate dominance meant something. And that's back.