During the fast-paced Lightning Round on Monday's Mad Money on CNBC, Jim Cramer was asked about Cypress Semiconductor Corp. (CY) .

"I think it's inexpensive. I'd buy it," he replied.

"Inexpensive" is not a term that technical analysts have in their vocabulary, so let's check out the charts and indicators to describe CY and whether it is in an uptrend or a downtrend.

In the daily bar chart of CY, below, we can see that prices have been in a downtrend from last March, but a small double bottom can be seen in October and December.

Prices have rallied from the late December low and now the indicators are mixed. CY is above the rising 50-day moving average line and above the flat/bottoming 200-day line.

CY made a modest upside price gap at the beginning of February. The volume of trading did increase but it was nothing special nor particularly strong as prices broke above the early December peak. In my mind I would have liked to see stronger volume on the gap to tell me the rally had strong sponsorship.

The daily On-Balance-Volume (OBV) line has been moving up from late December to confirm the price gains, but the rise in the line is OK, not "table pounding." The daily Moving Average Convergence Divergence (MACD) oscillator crossed the zero line in late January for a buy signal, but it has recently turned lower to generate a take profits sell signal.

In the weekly bar chart of CY, below, we can see a mixed picture currently.

Prices are above the declining 40-week moving average line. The chart, below, shows plenty of potential overhead resistance in the $16-$19 area. The weekly OBV line shows an uptick from the middle of December, but it is below its best levels of 2018.  The weekly MACD oscillator signaled a cover-shorts buy signal in January and it is close to crossing the zero line for an outright go long signal.

In this longer-term Point and Figure chart of CY, below, we can see an upside price target of $22 being projected. 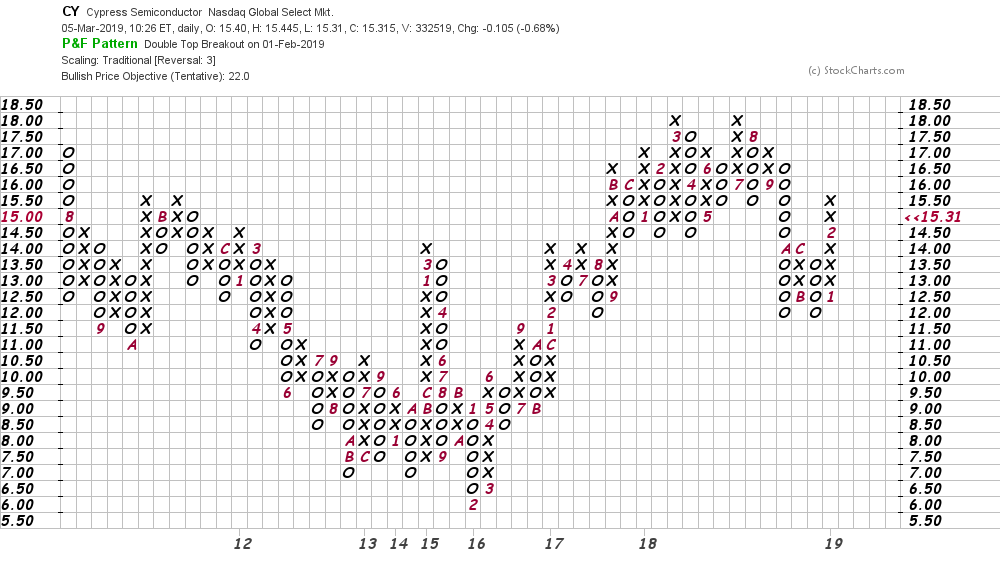 Bottom-line strategy: CY could rally from here, but it has a few strikes against it as volume has not been really robust and there appears to be an overhang of chart resistance to grind through. I think there are better opportunities elsewhere to make money in semiconductors.

Get an email alert each time I write an article for Real Money. Click the "+Follow" next to my byline to this article.
TAGS: Investing | Stocks | Technical Analysis | Semiconductors & Semiconductor Equipment | Technology