By TIMOTHY COLLINS Jul 28, 2021 | 12:04 PM EDT
Stocks quotes in this article: CLXPF
I understand why Cybin ( CLXPF) raised money this morning.
The company brought in an additional $30 million in Canadian dollars (about $23.8 million in U.S. dollars) at a discount of 15%. The deal comes with no warrants, which is a positive, and adding that amount to an already very strong balance sheet is not a negative from a long-term perspective. No debt and $90 million in Canadian dollars will make a fair share of companies envious. Now, Cybin has the ability to expand trials more quickly, develop more molecules, and even consider acquisitions. All positive.
Here's the challenge I see for some investors. The company indicated several times that it did not currently need money. By my estimates, the company is only a day or two away from uplisting to the New York Stock Exchange. The stock, until now, was one of the few non-large cap names that had extremely bullish charts. Offering stock at a 15% discount to yesterday's closing goes against the logic of the situation. Granted, the uplist will still happen. The chart is currently holding support, albeit a tenuous situation, and as I said earlier, the long-term picture now strengthens. But some probably hypothesize they could have done the raise for a higher price (or lower discount) once it sat on the NYSE.
After all, why not wait until after the uplist? The stock appeared to be set up to move to the Big Board and potentially see an additional rally without getting its kneecaps taken out. H.C. Wainwright just put out a buy rating two days ago and an $8 price target, helping cement it above $3 while other small caps struggled. It's worth noting H.C. Wainwright was also one of the underwriters on Wednesday's deal but not a lead bookrunner.
Again, it's not that I don't like a company being opportunistic and raising funds after a stock runs. I'm quite the opposite, actually. What I don't love is management that states they have no need for cash then turns around and raises cash. It's like ordering a plate of fries at a restaurant and your friend opts not to order anything stating they aren't hungry. Then, your fries come, and your friends eats half.
The good news is if you weren't in the stock, I really like an entry as close to $2.60 as an investor can get. Anything in the $2.60 to $2.75 range offers a very attractive long-term entry. 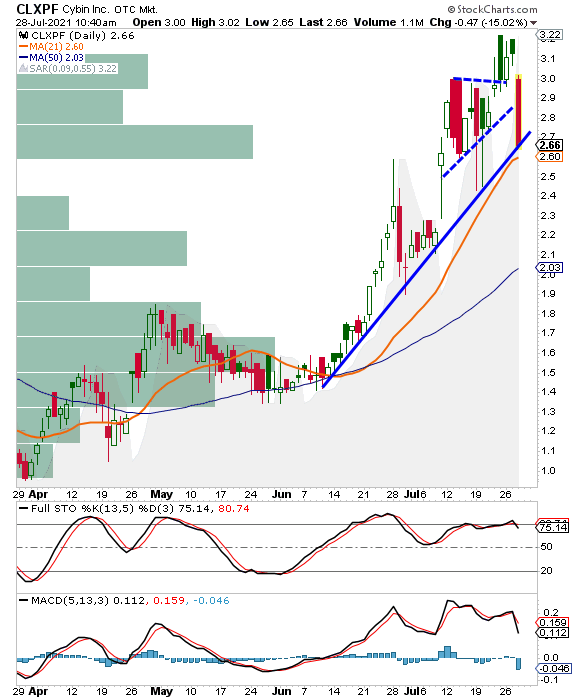 Looking at the chart, it's clear the $2.60 to $2.65 entry is a big support level. Should those fail, we could retrace to $2.20. Some might target the 50-day simple moving average (SMA) for an entry, but I anticipate that will rise to meet the $2.20 by the time the stock dropped that far. It's worth noting I do not think we will retrace that far. In fact, I do believe support will hold here.
This is another name where time frame matters. If you're view is long-term, then this stock action is a shrug of the shoulders and probably some slight annoyance. That's where I live. If you've been looking to flip this into the uplist, then Wednesday is a disaster. I'd anticipate those folks will look to flip out either on the first day of NYSE trading or if they get back to breakeven. These are just things to keep in mind as Cybin prepares to move to the NYSE.
Get an email alert each time I write an article for Real Money. Click the "+Follow" next to my byline to this article.
TAGS: Investing | Options | Stocks | Biotechnology

The stock price may be cheap but it could get even cheaper.