I'll often battle with some trader buddies over whether charts matter or not. If you fundamentally like or love (never fall in love) with a company, then does the chart matter?

For the long-term view, I'd say not really, but for your entry price, it may matter a whole lot. Take Cybin (CYBN) , for example. I've been extolling my intense like (avoiding the word love as we should) for months now -- and the stock has responded favorably. With that being said, Cybin is suffering from a bit of an uplist hangover.

Some traders will buy a name for the uplist catalyst. Ironically, the catalyst and move higher is often on the announcement rather than the actually uplist to a major index. Rather than seeing legs higher after the uplist, we get a sell-the-news instead. It's generally a short-term phenomenon but it has been consistent in the names I follow over the last several months.

If you look at all the news Cybin has released as of late, it's no surprise why the stock has doubled since April. The only "bearish" item may have been selling 8.8 million shares at C$3.40, which was about $2.75 at the time in U.S. dollars. While it came at a discount, adding another $30 million to an already incredibly strong balance sheet isn't really the most bearish thing in the world. They also filed for their 13th patent, entered a collaboration with Greenbrook TMS, received IRB approval to begin phase II of their CYB001 clinical trial, announced targets for CYB003, CYB004, and CYB005, signed a deal with Catalent (CTLT)  and a partnership with a division of LabCorp (LH) .

The crazy part is this is only some of the list. The reasons to own are there, but one might hesitate on a full entry right now because of the technical setup.

In my view, if you find a company you fundamentally love (darn it, there's that word), then you pick up some of it when you come to that conclusion, but you may not buy a full position because of the technical setup.

For instance, Cybin. Sellers rejected the stock at $3.40 a little more than a week ago. Since then, we have five straight red days, shares falling under the 21-day simple moving average (SMA), what amounts to a gap to fill down to $2.30, and bearish crossovers in the Full Stochastics, MACD, and parabolic stop-and-reverse (PSAR) indicators. Unfortunately, none of those screams buy. 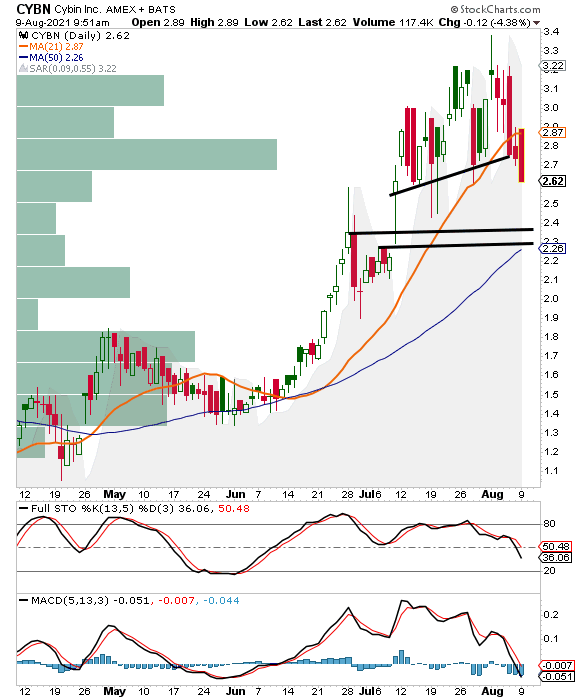 Don't get me wrong, I'm not bearish. This is still a favorite name for me long term, but I always strive to be open in my view on stocks I like and dislike. Fundamentally, I like this stock and believe it will be a huge winner looking out on the horizon, but the short-term technical picture may require scaling in patiently if you've been waiting for an entry.

Get an email alert each time I write an article for Real Money. Click the "+Follow" next to my byline to this article.
TAGS: Investing | Stocks | Technical Analysis | Pharmaceuticals | Global Equity

The danger of failed bounces within the context of a corrective cycle cannot be ignored.

Many fine companies are now available at huge discounts to both their true values and where they sat just a few months ago. Let's take a look.