CrowdStrike Holdings (CRWD) reported its first quarterly earnings as a public entity on Thursday evening. To say the company did well would be an understatement.

For the first quarter of fiscal year 2020, a beat of one penny seems unspectacular, as it's hard to see a loss of $0.47 per share as positive. CrowdStrike posted revenue of $96.08 million, also a beat. Good enough for year-over-year growth of 103.2%.

The metrics within are what's so impressive, though. Subscription revenue increased by 116% to $86 million. Non-GAAP gross margin widened sequentially to 74% from 62%.

What does CrowdStrike do exactly?

This company uses a database, as well as machine learning in order to detect malware on computers, mobile devices and corporate networks. In other words, cybersecurity. It's not just CrowdStrike. If you missed this move, the entire industry is hot, hot, hot.

How often does this come up. Somebody, somewhere finds out that they had a problem long after they've had one. From the personal computer, to the corporate network, to national security, this is one area where nobody can afford to be vulnerable, or at least not due to a lack of understanding.

I often speak of the business cloud as where CapEx funds have to go as companies invest in themselves, well, what about securing that cloud? CapEx has to go toward security whether companies want to spend or not.

The names in this space are not our usual cast of characters. From the San Francisco-based Okta OKTA, which only seems to go up, to Sarge-fave Zscaler (ZS) with a similar looking chart, there is no doubt that the market is placing a special kind of valuation on growth across this business.

There is another name that I find intriguing, however, and it is already quite profitable. Israeli network security software provider CyberArk Software (CYBR) .

What does CyberArk really do? Identity management is the game, or what is known as validation services.

The company expects to report its second-quarter performance in early August. Wall Street is looking for earnings of $0.47 per share on revenue of $97.3 million. If those numbers are realized, that would be good for year-over-year earnings growth of 30% on sales growth of 25%.

As of last quarter, sales were driven by Licensing (54% of revenues), and by Maintenance and Professional Services. Both business lines are showing similar growth rates, and have taken net cash provided by operating activities to record levels (39% growth). 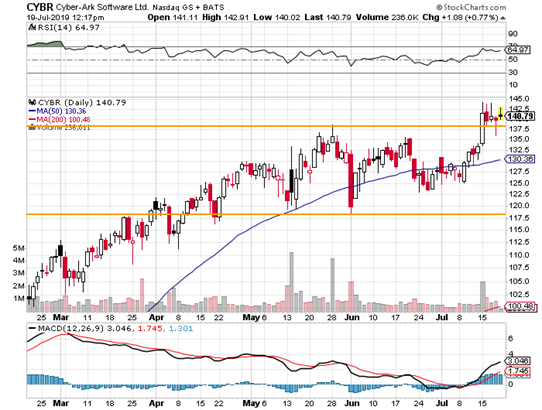 The shares seem to be breaking out of a basing pattern that consolidated gains made earlier in the year. The stock has run nearly 90% year to date, and even with some impressive financial performance, trades at more than 55x forward looking earnings. That may be justified in this environment even if it does seem crazy.

Remember, I am already long ZS. This would be in addition to that position.

Get an email alert each time I write an article for Real Money. Click the "+Follow" next to my byline to this article.
TAGS: Investing | Stocks | Trading | Cybersecurity | U.S. Equity