By STEPHEN GUILFOYLE Sep 12, 2019 | 12:14 PM EDT
Stocks quotes in this article: CVS
That CVS Health ( CVS) is starting to out-perform surprises not a soul at 14 Wall St.
I have been on the CVS bandwagon since recognizing a repetitive technical bottom in June, and the AAP crew has been on board longer than that. Now, investors may have also noticed that Deutshce Bank analyst George Hill put out a research note that broadly covered the health care technology and services industry, and within that note, Hill initiated coverage of CVS with a "buy" rating, while placing a $91 price target on the shares.

It all begins with the Aetna acquisition that closed back in November. That managed health care company -- best known as a seller of both traditional and consumer-directed health care insurance policies -- is integrating into the CVS Health family. The CVS health family already includes the chain of neighborhood pharmacies and personal wellness stores, as well as the pharmacy benefits manager (PBM, for short) CVS Caremark. The belief here is that investors will place a higher valuation on the shares. Investors also note that by streamlining the insurance side, the drug price negotiating process, and the retail side, the firm will be better able to use deep-level analytics to provide individual customers with efficient personal care at improved costs.
This is a very simplified rundown of how the drug pricing process as we know it, will land CVS Health in advantageous position. Then again, drug pricing is a political football, where big pharma has no allies, and perhaps neither do the middlemen. For now, we play the game in front of us. Here goes...
Big pharma sets a list price for wholesalers. Wholesalers sell drugs at higher prices to pharmacies. PBMs negotiate better prices between pharma and those wholesalers or the neighborhood pharmacy or both. This is the point where the word "rebate" starts to show up. Once contracts are agreed upon, and a rebate is understood, most of that rebate will land back at the insurer, with the PBM perhaps getting up to 10% cut. The last step in the process is where you end up at the counter, hoping your insurer pays more for the medicine than you do. Your portion is your co-pay.
What's important to point out here is that CVS Caremark is noted for not taking a large cut of these rebates, and claims to return 98% of rebates back to the insurance company. Now, if both the insurance company and the PBM are both under one roof --  now you're catching on --  and they'll sell you a bag of peanuts with that beta blocker, to boot.

What is interesting to this trader is the revenue growth of 35% that was reported for the second quarter on Aug. 7. This was the second consecutive quarter of 35% growth, and a dramatic increase from the pre-Aetna days. The firm also returned earnings per share growth to trend (+12%) for the second quarter. The firm is expected to report again in early November. Estimates are currently for an earnings per share print of $1.76 (up small) on revenue of $62.9 billion (roughly +33%).
The balance sheet has admittedly been an issue for fundamental investors. Debt has understandably blown up, while cash levels have been severely reduced, thus forcing both Current and Quick ratios down to unacceptable levels. The remedy will come from higher margin produced through integration. The firm is already a cash flow beast. Book value per share is already dramatically higher than it was a year ago, though the shares trade lower in secondary markets.

What I see here is break-out off bottom that now leads to resistance, either at the top trend-lie of the Pitchfork or the 50% Fibonacci re-tracement of the brutal December through March sell-off. You pick. The daily Moving Average Convergence Divergence is in very good shape, as is Relative Strength, without truly becoming over-bought. The next upside catalyst, the one that could crack resistance, may just come from a "Golden Cross" as the 50-day Simple Moving Average now stands just a few cents below the 200-day Simple Moving Average. That is what may cause an algorithmic reaction more valuable than some kind words ion a research note.
I had recently moved my target price from $61 to $69, when my original target had been pierced in mid-August. I'll tell you what: I like $91 a whole lot better than $69. The Street seems to be in the low $70s on this one, anyway. 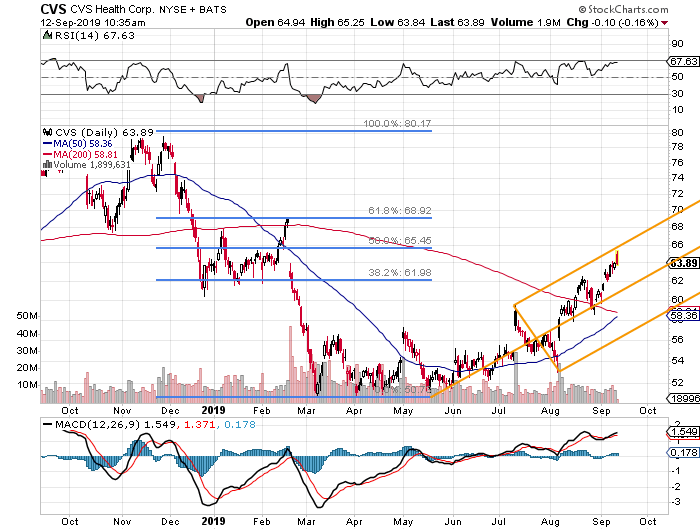 The investor could buy 100 shares, I hope on a dip. The market seems to want to offer investors one here late on Thursday morning. That investor could sell a Nov. 15 $70 call against the equity stake in order to reduce net basis by roughly 75 cents, while not increasing risk other than possible opportunity cost. This investor will then enjoy an annual $2 dividend (3.13% yield) even if said investor devotes the rest of their life to sitting on the couch.
(CVS Health is a holding in Jim Cramer's Action Alerts PLUS member club. Want to be alerted before Jim Cramer buys or sells CVS? Learn more now.)
Get an email alert each time I write an article for Real Money. Click the "+Follow" next to my byline to this article.
TAGS: Health Insurance | Investing | Stocks | Food & Staples Retail | Pharmaceuticals | Retail | Health | Stock of the Day