About 10 days ago, everyone who was interviewed on television and every research report I read stated that everyone was watching the curve of the coronavirus, before they could embrace the market.

Do you remember that?

I even showed you a segment with a chart I had seen on CNBC that showed "peak virus" was easily a week or two prior to that, yet everyone was still looking for the peak to show up.

Have you noticed no one talks about flattening the curve anymore? The new chatter is about opening the economy. The market was already looking beyond the flattening of the curve 10 days ago, yet the chatter was that folks were still looking for it. Now it seems most are already banking on the reopening going as smooth as can be. So sentiment has shifted quite a bit in 10 days.

I can tell from the various strategists who have upped their targets on the market, several calling for new highs by year end. I can also tell because while the put/call ratio does not show it, the Investor's Intelligence bulls jumped a bit more than 7 points this week to 41%. So we have seen the first non-anecdotal evidence of the change in sentiment.

Not to mention that talk of a retest has come off the table. 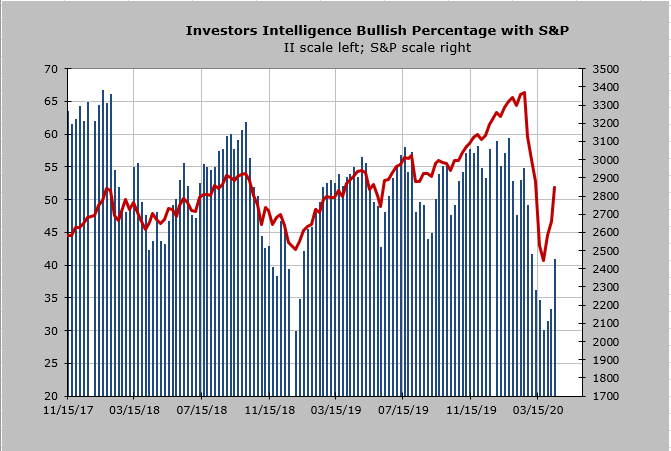 As for the indicators, they still have not changed. Breadth was weak for the third straight day (relatively speaking), but so far, it wasn't enough to change the indicators. But as I have noted before, weak breadth is what will move the indicators I use. So it pays to watch breadth closely.

For example, as of Wednesday morning, the McClellan Summation Index had a big cushion for a few days on the downside. It needed a net differential of negative 5,300 advancers minus decliners on the New York Stock Exchange. As of now, it needs negative, 2,800. So there is still a cushion but its slimming down.

For the last few days the S&P 500 has done a pattern of up-down-up-down, leaving the S&P with the same closing price it had last Friday afternoon (black box on the chart). This is similar action to what we saw in late March (green box on the chart) when we went every other day.

But since last Friday net breadth has lost nearly 2,000 issues. So the divergence is developing, and it is doing so as sentiment has finally moved. We had a similar divergence at the green box, but it was resolved with a drop and a pop the following week. The difference of course is we are closer to an overbought reading now.

On Thursday morning we'll see how bullish the day traders at the American Association of Individual Investors have gotten.

Get an email alert each time I write an article for Real Money. Click the "+Follow" next to my byline to this article.
TAGS: Investing | Stocks | Top Stocks |

Making Sense of the Big Move on 10-Year Treasury Yield

The 10-year Treasury yield had its largest single-day rise since June 5, and here's what the current sell-off could be telling us.