A Matter of Trust

Market breadth was a lot less impressive on Thursday than it was on Wednesday. That said, eight of the 11 S&P sector-select SPDR ETFs traded higher for the day on Thursday, with four of the top five performers coming from the ranks of the more cyclical sectors. Three of the bottom four sector funds on Thursday were defensive types.

The Financials (XLF) led the way, up 1.76%, as the KBW Bank Index gained 2.84%. It was as if investors finally noticed the steepening of the Treasury yield curve, which has produced a number of wider, less badly inverted spreads. I remain long both Bank of America (BAC) and Wells Fargo (WFC) as I believe among large money centers that these two are best positioned to benefit from a rebirth in traditional banking as a business.

Overall, though, I would have to say that enthusiasm for this equity market rally has been constrained. A 75-basis-point increase made to several European Central Bank (ECB) interest rates put a bid under the euro, allowing US dollar valuations to catch their breath and everything from stocks to commodities to rally in a pedestrian manner. Winners beat losers at the New York Stock Exchange by a rough 8 to 7 and at the Nasdaq Market Site by almost 3 to 2. Advancing volume took a 69.1% share of composite NYSE-listed trade and a 64.3% share of that metric for Nasdaq listings. Both percentages were well below the 80%-plus share enjoyed on Wednesday.

Aggregate trading volume fell for a second consecutive day across those Nasdaq listings, but increased slightly for names listed at the NYSE. Volume did not approach the 50-day trading volume simple moving average for either the S&P 500 or the Nasdaq Composite. In short, the pros have still not joined this rally in size. Perhaps they do not yet trust this rally. That's easy to say because neither do I. I have seen very little to this point that would confirm for me a change in trend. In my opinion, this remains a traders' market and a much more difficult environment for investors.

Messages sent by Fed officials as a group have certainly been forthright and direct. While these messages certainly appear to be the result of group-think -- or as Dougie Kass says, "group-stink" -- which is always dangerous, we can at least give them that. The messaging has been both simple and blunt. Thursday, with Fed Chairman Jerome Powell speaking at a virtual conference hosted by the Cato Institute, there was no variation. Powell stated, "It is very much our view, and my view, that we need to act now forthrightly, strongly, as we have been doing, and we need to keep at it until the job is done." If anyone was still thinking 50 basis points for Sept. 21, that was probably where those thoughts ended.

In reference to the inflation of the 1970s, Powell went back to his short, terse speech at Jackson Hole: "The public had really come to think of higher inflation as the norm and to expect it to continue, and that's what made it so hard to get inflation down in that case." Powell then let us in on what really worries him: "The question really is, is this (inflation) going to be a temporary thing that's really related to the pandemic in some way, or is there actually something more structural and persistent happening?"

Chicago Fed President Charles Evans, who does not vote on policy this year, also spoke. Evans is set to retire in 2023 when Chicago does indeed vote on policy. Evans said, "I think that we've got a good plan in place. We could very well do 75 (basis points) in September. My mind is not made up. I do know that we need to be increasing interest rates up to a substantially higher level than where they are now." Evans, who has long been considered one of the most dovish Fed officials in modern central banking history, added, "I would prefer to find an appropriate spot to pause and monitor how things are going rather than go much higher -- potentially overshoot. I wouldn't say that I am advocating sort of pausing at 3.5%, because I think 4 is more likely."

As I have repeated since the very first inkling of a change in policy, financial markets have never swung out of a downtrend on their own with the Fed still in a tightening cycle. The Fed changes its stripes, so will the market. Otherwise, what we see will be a slow to not-so-slow deterioration in market conditions periodically interrupted by bullish-looking spikes in volatility. To think differently would be to fight the Fed. Now, I cannot guarantee that fighting the Fed would be a mistake. That said, I have been around the block more than once, and it always has been.

Saying Nothing at All

Kind of like the financial TV pundits who say they "like" a stock here instead of telling us where they bought the stock and what their price target is (many of them do not even trade), or better yet, the ones who never get specific, some strategists have also become adept at saying literally nothing at all.

Take the note released by Deutsche Bank AG on Wednesday that made the rounds on Thursday. Strategists led by Binky Chadra wrote, "The outlook looks relatively binary. In the event we slide into a recession, the selloff has much further to go." Chadra sees the S&P 500 trading as low as 3,000 in such an event. However, Chadra also states, "We expect the market to rally back sharply to its prior peaks." Of course, this is only if recession can be avoided.

Guess what? Chadra's year-end target for the S&P 500 is still 4,750, up a cool 18.6% from Thursday night's close. The note adds, "Leading indicators are consistent with a descent into recession, but not signaling we are in one already."

Wow. Really useful. Basically, in case you couldn't tell, these "strategists" over at Deutsche Bank think that we may or may not be in recession, and that if we are not that we may or may not go into recession. They also feel that a recession would be really bad, but if recession is avoided that would be just swell. Can't make this stuff up. These kinds of folks are all over Wall Street and they actually get paid for their opinion. 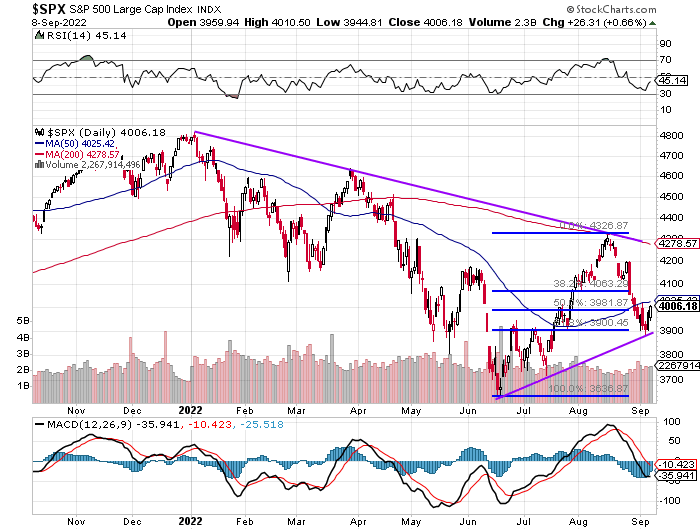 Readers already knew the S&P 500 had hit resistance at a downward-sloping trend line in place since almost New Year's Day. The index has now found support at a rising trend line in place since the lows of mid-June. In the meantime, most recent support had been met close to a 61.8% retracement of the June through August rally. Relative Strength is neutral while the daily moving average convergence divergence (MACD) retains a bearish posture.

Readers will note that the S&P 500 heads directly for a test on Friday morning at the 50-day simple moving average (4,025). Should the market produce resistance at that spot, the lower trend line will come back into play. As the two trend lines converge, the likelihood of an explosive move to the upside or downside increases.

With that potential recession looming, dollar valuations at uncomfortable levels, equity valuations still closer to elevated than deflated, liquidity being drained from the monetary base and short-term interest rates still on the rise, it's easier for me to see the path lower as more likely. 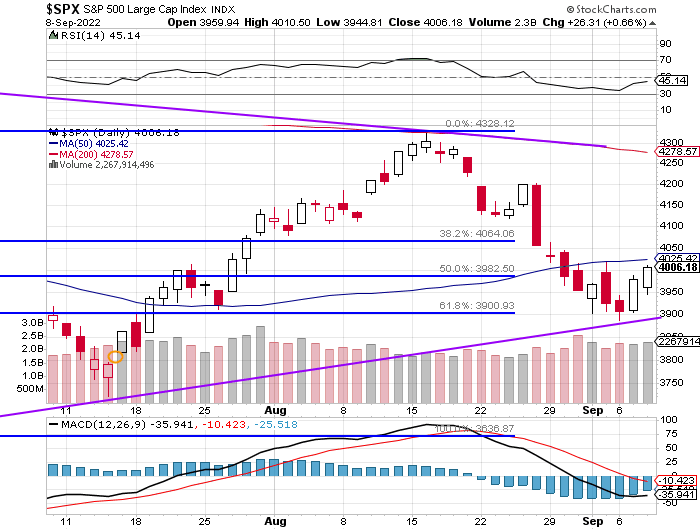 See that unfilled gap in mid-July between 3,796 and 3,817? Should the lower trend line fail to provide a landing spot on the next retest, my feeling is that this could be the very spot targeted by our algorithmic friends. That's more than 200 points, Sarge. I know.

We've Got a Runner

I had been pointing out publicly the successful quarters posted by both Palo Alto Networks (PANW) and CrowdStrike (CRWD) for the season just ended. I had used those results to point toward Zscaler (ZS) , an old Sarge fave that has really never let me down, as an opportunity. I came in long for a trade, too cautious to come in loaded for bear. Even with some recent cybersecurity outperformance, how could I really trust a stock still trading at absurd multiples?

Well, Zscaler hit it out of the park Thursday night. For Zscaler's fiscal fourth quarter, ZS posted adjusted earnings per share of $0.25 on revenue of $318.06 million. Both numbers beat the street while the revs grew more than 61%, in line with where growth has been for a full four quarters now. Zscaler then guided revenue above consensus for both the current quarter and the current fiscal year while raising expected adjusted full-year earnings well above where Wall Street had been.

I see ZS up a rough 21% here on Friday morning. It's going to take all the discipline I have, but a trade is a trade, and an investment is an investment. I went into this with the intent of using it as an overnight rental. Even though I am partial to the name, I have to complete the trade in order to be a winner. I will ring that register this morning and perhaps initiate a long position with more permanent intent at a lower price in response to the broader market selloff that I still expect.

Get an email alert each time I write an article for Real Money. Click the "+Follow" next to my byline to this article.
TAGS: ETFs | Federal Reserve | Earnings | Indexes | Interest Rates | Investing | Stocks | Technical Analysis | Cybersecurity | Real Money | Analyst Actions