By STEPHEN GUILFOYLE Jul 17, 2019 | 12:02 PM EDT
Stocks quotes in this article: CSX, UNP, NSC, KSU
The rails, for the most part, have traded sideways since early this spring, mostly running up against familiar points of resistance several times over. It matters not whether one takes a look at CSX Corp. ( CSX) , Union Pacific ( UNP) , Norfolk Southern ( NSC) , or Kansas City Southern ( KSU) , the charts over the past three months or so, do not vary all that much.
Yet, as the transports showed some recent strength, so did this group, all scoring Tuesday runs of at least a full percent. That jubilance came to a screeching halt shortly after Tuesday's closing bell rang at 11 Wall Street.

Late Tuesday afternoon, CSX Corp reported second-quarter earnings per share of $1.08. Good for 7% earnings growth. That said, the number missed expectations, and 7% is the firm's slowest growth since James Foote took over as CEO in late 2017, taking over for deceased railroading legend Hunter Harrison. Revenue? Not pretty. The print of $3.06 billion not only missed projections, but shows a year-over-year contraction of 1%.
The weakest sales growth since, you guessed it... 2017.
Before we look at some of the nuts and bolts of the business, I think the most important takeaway came from the evening's earnings call. The firm lowered guidance, based on the underlying macro picture, as well as the shuttering of an oil refinery destroyed by fire in June that accounted for 1% of all CSX annual shipping volume. That's bad....
But how unsettling might it be for shareholders to hear a chief executive speak in the way that Foote spoke on Tuesday night. Foote, quite simply said, "Both global and U.S. economic conditions have been unusual this year, to say the least, and have impacted our volumes. You see it every week in reported carloads."
OK, we're still with you, here, we can see that take from a leadership position, then ... boom! Foote goes on: "The present backdrop is one of the most puzzling I have experienced in my career."
Hmm? While we do appreciate the honesty, perhaps an uncertain environment can be expressed in such a way that does not take the shares down more than 7% overnight.
You know, back in the days before GPS, we had to navigate by map and compass on foot. Not the easiest task in, say, a desert with no landmarks, or, say, a jungle that requires one to reshoot an azimuth every few feet due to dense vegetation. For those who have never had to do this, the more you have to shoot your azimuth, the greater the degree of human error in staying on course. Other than having one's assistant squad leader follow along independently, because he or she is probably also competent, the last thing one can ever do is appear unnerved in front of those trusting in them to figure it all out.

As for volume, key to the data is a 10% year over-year-decline in intermodal freight transport, which makes sense. Why? Because more 65% of all intermodal transport involves import and export flows, and quite frankly global trade, as supported by global economic growth. That is in a tough business line to be in, in 2019.
Transport of fertilizers (wet weather) and metals (sheet steel) also experienced some nasty year-over-year contraction. Chemical (crude and waste) transport continues to be this railroad's top performer, with the best growth actually coming from agriculture (grain and ethanol).
Better control over expenses is a balance sheet bright spot. The firm benefited from reductions in both payroll, and fuel costs. The firm also saw benefit from a significantly reduced train accident rate, and an improved personal injury frequency rate, as well. In terms of efficiency, CSX had a record quarter, and this probably should have been Foote's focus, as this is indeed impressive. Operating ratio, for those new to the way railroads report their data, is simple. It's just operating expenses as a percentage of revenue. See how easy that was. For the quarter, CSX posted a 57.4% operating ratio, their all-time best, and down from 58.6% same quarter last year.
My assessment is that this railroad is operating probably at the highest level possible in this environment, and that perhaps if the macro stays "OK," and trade at least does not worsen, that CSX is indeed investable. Just don't use the word "puzzled" when discussing the backdrop for a business you've been in for 40 years. 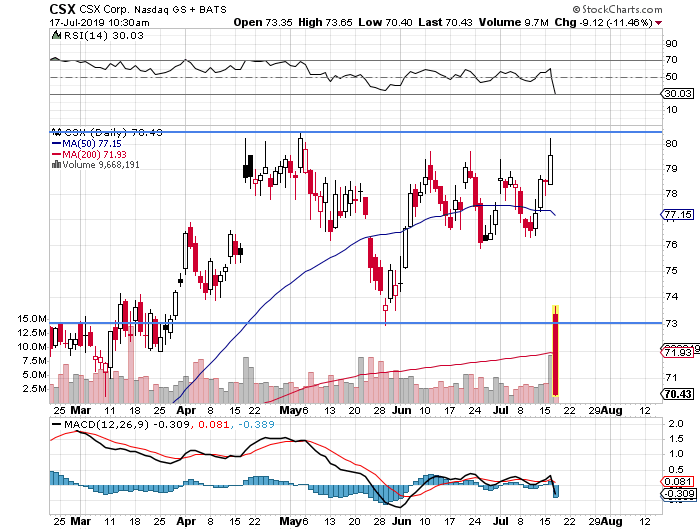 The blue lines have been drawn to illustrate the trading range over the April though last night's period. It not only significant that the shares broke the lower bound of that range, but probably even more negative that both the 50-day and 200-day SMAs have been lost in the same morning. That brings a double whammy of mindless selling from the "algo" crowd, who react to these things and then cause momentum that actual sentient traders must either anticipate or react to.
An annual dividend of 96 cents a share is better than a sharp stick in the eye, but not enough to impact decision making.
My thought. I am not going to trade CSX today. I think I might like it down here, but the problem is this: Union Pacific reports Thursday morning, and Kansas City Southern on Friday morning. The whole group is being punished, and I am already long UNP. I have enough exposure. Should these shares still trade at this discounted shares after KSU puts some digits to the tape, Then I take another look at CSU.
Get an email alert each time I write an article for Real Money. Click the "+Follow" next to my byline to this article.
TAGS: Investing | Stocks | Transportation