By TIMOTHY COLLINS Jul 17, 2019 | 01:44 PM EDT
Stocks quotes in this article: CSX, MNK, JBHT
When stocks are trading near all-time highs, you have to be careful chasing names getting crushed on earnings. I'm certainly one to play for bounces or look for trades on names that may be turning from a bottom and heading higher, but catching a falling knife when the overall market has been strong tends to be a losing game.
That's why I have no interest in a name like Mallinckrodt  ( MNK) or CSX Corp. ( CSX) , the stock of the day. There's a time to buy weakness, but it isn't these scenarios. Buy weakness when the overall sector is strong, but a specific name has trailed. Buy weakness when signs of a bottom are in place, on a higher low, or when the market begins to buy news that isn't as bad as expected. Buy weakness when there might be some performance-chasing by funds. Don't buy weakness for the sake of buying weakness.
CSX turned in a disappointing second-quarter earnings per share of $1.08, two pennies below expectations with revenue of $3.06 billion coming in just below expectations.
Unlike some early earnings reports, the tone from CSX is not one of optimism. With a year-to-date performance and 12 month performance of 20%-plus, the stock has still come a long way. Remember this came off the $50 level back in early 2018 and $60 level to kick off 2019. It has a habit of sharp, nasty pullback, and they generally last three weeks. While one week is often significantly larger than the other two, it still creates the expectation for me that CSX will see $65 before it finds a bottom.
The $70 level  might be support, if I want to get liberal with drawing support and trend lines on the weekly chart. But I really don't see much help for the bulls if CSX closes under $75 this week. Without a significant recovery, we're unlikely to see that happen. I expect a bit of a dead cat bounce to around $72.75 before we see flippers head back to the sidelines.
Rails appear to be running in stark contrast with trucking. J.B. Hunt ( JBHT) turned in less than expected earnings, but still rallied. That was a case of weakness being bought because the results weren't as bad as expected. It was also a stock not trading near all-time highs. I believe we'll need to see a reset on the rails valuation, at least until we see an end to the Trade War. It's not as if the U.S. economy will get much better given the strength we already see, plus the Fed throwing all the gifts it can to stocks. There are better plays, easier plays in the market, so why force an issue with CSX?
The only trade I see here is a possible bounce of 2%-2.5% before the end of the week. Beyond trying to nab that, I'd take a pass on this train ride and revisit in another two to three weeks to see if a possible bottom is in play. 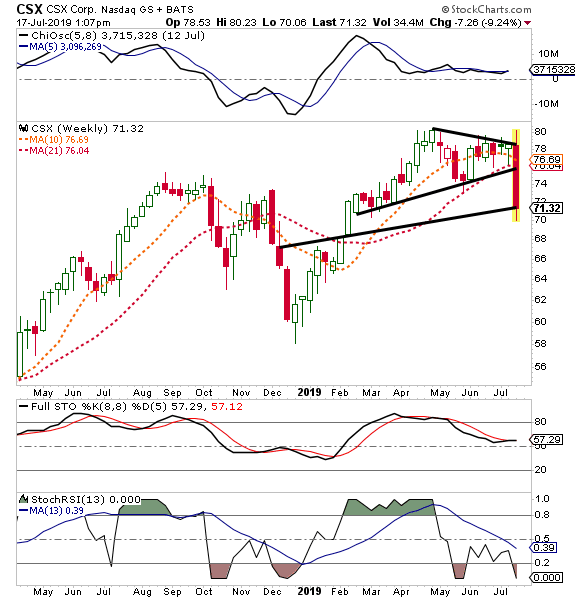 Get an email alert each time I write an article for Real Money. Click the "+Follow" next to my byline to this article.
TAGS: Investing | Stocks | Transportation | Stock of the Day