Nothing stays the same forever. Nothing at all. There was a time, before so much technological progress had been made, that if a soldier was out late at night in some forsaken piece of wilderness, and a bright light such as a flare suddenly turned night into day, the soldier would drop to the ground to remain unseen, while quickly covering one eye to retain at least some measure of God-given night vision. This was so when the flare burnt out, the soldier would not be momentarily blind upon the return of what is known as "pitch black."
To this day, as I turn on all of my machines as I prepare to write Market Recon at 0300 and change every morning, I often do so with one eye closed, as an instinctual precaution, while my computer screens turn night into day.

So it is that Facebook ( FB) is expected to release a White Paper discussing the use of a potential cryptocurrency-using block-chain technology going forward. There are many reasons that I see this to be more than just some wild idea. First, one has to consider Facebook's 2.4 billion monthly active users, a somewhat captive audience that is still growing across the various social media platforms operated by the parent company. This likely results in what is a mass group of consumers on which there is already developed intelligence regarding tastes and preferences that could be used as an aid in targeted marketing.
Even more interesting than the nicely set table would be the ability of Facebook to attract investment in this plan. Investment that has come from the likes of Visa ( V) , Mastercard ( MA) , PayPal ( PYPL) , Uber  ( UBER) , Booking Holdings  ( BKNG) , MercadoLibre ( MELI) , and Spotify ( SPOT) , among others according to various sources. Apparently, companies interested in operating a "node" have to contribute as much as $10 million to be able to validate transactions.

The trick, and it's important, will be to separate control of this new digital currency from Facebook. The company intends to do this by ceding power to an independent foundation in Switzerland. This is key as the firm has often been criticized for its practices in the past regarding user privacy, and is now reportedly under open regulatory scrutiny along with several other big tech names such as Alphabet ( GOOGL) , Amazon ( AMZN) , and Apple ( AAPL) regarding the bounds of anti-trust laws. The possibility exists that one of more of these firms could ultimately be broken into smaller pieces.
This paper will also reach publication as Bitcoin ( BTC)  has regained much lost ground in dollar-terms this year as nations with less than stable currencies leave citizens with a need for a vehicle to assist with their own capital flight. Bitcoin, as with almost all other cyrptocurrencies, has never caught on as a medium of exchange, however, even if in some bizarre way, it has served as a store of value, volatile as it is.

Who is to say for sure, but this really could be just what the doctor ordered for the otherwise under-valued firm with the large user base and sizable advertising revenue, but a questionable reputation with investors. I have never been a fan of Facebook management. Folks who read me often know that. This does, however, seem well-thought out, as the coin will be pegged to a basket of existing government-backed currencies to tamp down on volatility, while preliminary reports are that there will be some kind of multi-national launch in early 2020.

The troubling question for me is why would companies already in the processed-payment game want to invest here, unless they either want a piece, or simply intelligence. Either way, I do believe that with Facebook trading 4% higher this morning, that today might not be the day, but I can see a reason to start buying the name again, on dips, and while I am no fortune teller, I think that we end up seeing some of those as we move forward. Everything hedged. 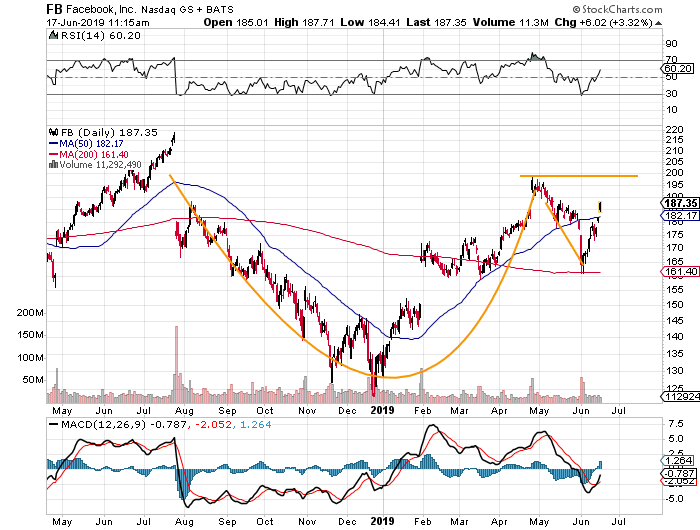 The obvious boost that this news provided is the "giddy up" experience by the shares as they zipped past the 50-day simple moving average this morning. The idea, I think, to reduce risk would be to see if there is a re-test of that line in coming days, and grab a few there if possible. The next test will come as FB approaches the peak of the right side of the orange cup at 198. That spot will either serve as resistance, or as catapult. A cautious trader could still sell $182.50 puts expiring this Friday for $1.11. That would either end up being $111 in the pocket or a net basis on 181.39 if the trader does get tagged.
Apple, Alphabet, Mastercard, Amazon and Facebook are holdings in Jim Cramer's Action Alerts PLUS member club.
Get an email alert each time I write an article for Real Money. Click the "+Follow" next to my byline to this article.
TAGS: Investing | Stocks | Technology | Cryptocurrency