It almost happened shortly after that bell rang aloud at 11 Wall Street on Wednesday afternoon. At 04:29 Thursday morning, it happened even if briefly. The U.S. 10-Year Note yielded more than 1.3%, after giving up just 1.13% as recently as Monday morning and more than it had just a week ago.

What is most important about such a lightning-quick recovery is not that equities have rallied for two days, as capital has finally leaked once again out of debt markets, it's that managers seem to believe what they had doubted earlier this week. They believe, or at least respect the "growth" story.... and the transitory, but not "that" transitory narrative around consumer-level inflation.

Net fund flows data for the week ending Wednesday, July 21 are not yet available at the "Refinitive-Lipper" page that tracks such things. One can only imagine what those numbers will tell us once we see them. An unfinished tale to be told in parts.

What we do know is that what that 10-year paper pays crossed back above its 200-day simple moving average on Wednesday, which more importantly did the same for the spread between the 10-year yield and the yield paid by the 3-Month (90 Day) U.S. T-bill, the most accurate predictor in our tool box for signaling a coming period of economic contraction.

Readers will note that this spread went out at 125 basis points, cruising toward possibly retaking the 21-day exponential moving average at 132 bps. At zero dark thirty, that 90-day pays 5 bps, keeping the spread at a rough 125 or so.

All eyes (worst saying on Wall Street) remain on D.C. For those who choose to follow the 10-year/2-year, that spread went out on Wednesday and still trades at 108 bps.

Quiet. Deafening. An unspoken roar across a desperate landscape. The children wait with anticipation.

Oh say can you see... an equity market brought back to life over two days, led by Energy, Financials, Materials and Industrial stocks. Left somewhere behind on the dusty trail: Utilities, REITs, Staples, and even Health Care.

Play defense? What do you think this is? Monday? Get with the times, dude. Remember what we spoke about earlier this week? The S&P 500 and its wonder line of support, the 50-day SMA?

Rocket? Satellite. Jeff Bezos and Richard Branson have nothing on the S&P 500. Gap filled. Swing traders rejoice. Fact is that the S&P 500 "only" picked up 0.82% on Wednesday. Small-to mid-caps are still picking first downs on every play, storming back from a badly oversold condition that has just about normalized. Markets open higher on Thursday and the S&P 600 will most likely leave that technically barren desert.

Beware, oh do beware, my fellows, for aggregate trading volume ebbed a bit on Wednesday from the frenetic pace of Monday, Tuesday or even last week. Winners beat losers by something close to 3 to 1 at both of New York's primary equity exchanges, while advancing volume beat declining volume by more than 4 to 1 at the Nasdaq and more than 5 to 1 at the NYSE. Highly positive internals on light volume.

Buyers could grow weary. But will algorithms? Right.. Eyes on D.C. Spending on infrastructure is simply delayed, not rejected. Then, the big one. $3.5 trillion. Reconciliation. Deficit spending.

I sound like a dinosaur. We will love it. Until we don't love it anymore. The virus still hunts. The unknowable.

One thread. One single piece of string

Contribution, small... to a greater fabric

just lint, all by itself

So easy to pull

So easy to support

One thread in front

Pull of the string

Word on the street is that Fed Chair Jerome Powell is in decent enough standing with the White House to perhaps keep his job leading the central bank.

Powell is up for a second four year term at the helm in 2022, and we all saw how President Trump came to regret his decision to replace current Treasury Secretary Janet Yellen with Powell as Powell tightened policy back in 2018. Not a soul can deny though that Powell has excelled in his position through the most difficult times of the pandemic, acting not just on time, but ahead of time, plugging holes in liquidity and market function before they even appeared. He probably will and should survive the change in residency on Pennsylvania Avenue.

There will be change made at the central bank, however. Fed Vice Chair Richard Clarida is a Trump appointee. His terms as both Vice Chair and as a governor expire in 2022. Randal Quarles is also a Trump appointee. Quarles will see his term as Vice Chair for Supervision complete this October (2021), but his term on the Board of Governors does not end until 2032, yes that is a "3." There will undoubtedly be some change at the central bank.

There are not a lot of talking heads that I will unmute my television for. Guggenheim Investments Chair Scott Minerd is one of the few. Minerd appeared on Bloomberg TV Wednesday afternoon. Referencing the stock market, Minerd said, "September and October are likely to be very tough this year" adding "maybe a pullback of 15% or slightly more."

Minerd cited the natural cycle of volatility endured by markets on a seasonal basis, potential for a faster-than-expected tapering of asset purchases by the central bank, and the spread of the Delta variant of the SARS-CoV-2 coronavirus as major risk factors for equities.

I have seen models that exponentially pile new infections upon old into the autumn making this fall appear quite daunting. On that note, however, I think --and I am no virologist -- one must also understand the dynamics of transmission.

Transmission is, in my limited interpretation, influenced by symptoms and severity of illness. Yes, we do understand that the asymptomatic, or mildly ill can spread the virus. Some also believe that the virus (based on past variants) has a secondary attack rate of more than 15% for the symptomatic and less than 1% for the asymptomatic. Hence, very simplistically, with half the population capable of becoming infected but not very sick thanks to the available vaccines, the aggregate secondary attack rate across the population should be in some way suppressed.

The larger problem will then be the under 12 years of age crowd, as none of these kids are vaccinated, and some of these later variants, at least anecdotally, appear to discriminate less by age than did earlier versions of the virus.

What I am saying in fancy-speak is simply that I don't know. There is a chance that this recent spread abates within a month or two as demand for the vaccine among the unvaccinated has certainly spiked this week, which is good news. There is also a chance that the virus will use our children as a means of survival and further mutation. That would be catastrophic.

Send in the Clowns

Tesla (TSLA) CEO Elon Musk, Square (SQ) CEO Jack Dorsey, and Cathie Wood, founder and CIO of ARK Invest got together via teleconference and held a cryptocurrency pep rally on Wednesday. They talked about all kinds of wonderful things like how much cleaner and greener the environment for mining for cryptos will eventually be.

Musk even indicated that Tesla will start accepting Bitcoin as payment, once a higher percentage of that most infamous of digital currencies/commodities is produced using renewable energy. Musk added, "I might pump, but I don't dump." Oh, how nice.

Dorsey indicated that if Bitcoin had existed before Twitter (TWTR) , Facebook (FB) and YouTube that entire business models would have evolved differently, while Wood sees Bitcoin as a hedge against inflation. Well, we knew that. We knew that cryptocurrencies were in use by individuals to move wealth out of troubled currencies and across borders. We also know that cryptocurrencies have become favored over both cash and precious metals by the ugly side of commerce --the drug dealers, terrorists, and cyber criminals of this world. Why? No physical hand-off.

Nonetheless, the pep rally worked and both Bitcoin and Etherium rallied hard. Oh, Scott Minerd did say something about cryptos on Bloomberg yesterday. What was it again? Oh yeah, Minerd sees Bitcoin falling to "something in the neighborhood of $15K", and in reference to the entire cryptocurrency landscape said "A lot of this stuff is just junk."

Arya wrote "These stocks are not exposed to cyclical unit growth and volatile memory capex, but instead benefit from specific product cycles and share gains across AI, cloud computing, gaming, networking, enterprise, and 5G infrastructure."

All three are Sarge faves. Sarge is long all three, but not as long NVDA as he would prefer, being he only started to get back in the name this week.

Me too. I am not getting back in Moderna (MRNA) here, though. The stock, despite the fact that they are going to sell a lot more vaccines, is now inflated due to its inclusion in the S&P 500. 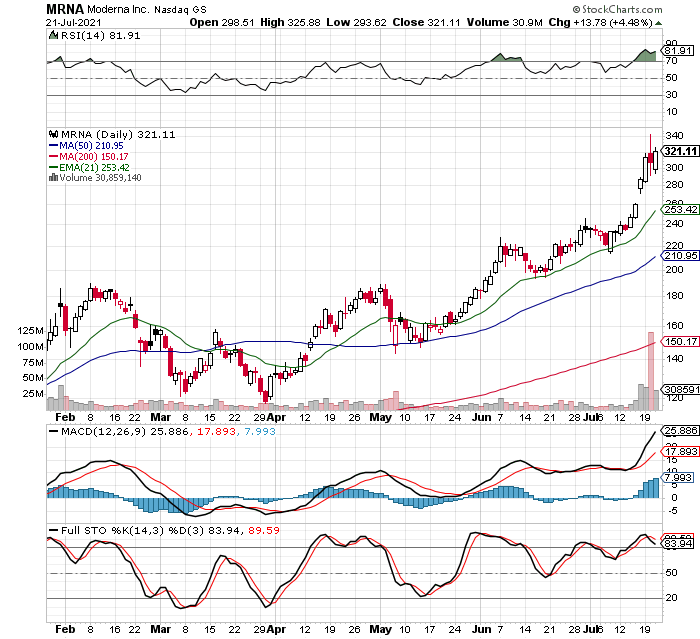 Still want to buy Moderna? Relative Strength stands at 81. The 70 level signals an overbought condition. The 14 and 3-day lines comprising the Full Stochastic Oscillator, both run above 80, which is the similar level for that indicator. The daily Moving Average Convergence Divergence (MACD) looks like something out of "King Kong versus Godzilla."

Oh, one more thing: There is a big gaping hole in between the $260 and $270 levels that, in my humble opinion, probably fills, maybe this year.

Do I start buying there? Probably. Sell puts? The January $260s are paying a rough $23; $237 net basis if forced to eat the shares. Sounds great. I think myself rather brave, but that would take more guts than maybe I have. I don't know.

(ABT, FB, NVDA, AMD, MRVL and UNP are holdings in Jim Cramer's Action Alerts PLUS member club. Want to be alerted before Jim Cramer buys or sells these stocks? Learn more now.)

Get an email alert each time I write an article for Real Money. Click the "+Follow" next to my byline to this article.
TAGS: Earnings | Futures | Indexes | Investing | Markets | Stocks | Trading | Treasury Bonds | U.S. Equity | Cryptocurrency | Coronavirus