Equities had been kicked around on Thursday. Treasury securities were under pressure. Commodities were slapped around as well. The S&P 500 and the Nasdaq Composite both came close to undercutting their lows from a week ago. They will. The Dow Industrials already have.

The day started out with a bevy of mostly weaker-than-expected macroeconomic data. The day ended with FedEx (FDX) , one of two major national/global parcel delivery service providers, pre-announcing a terrible quarter, withdrawing guidance and announcing cost-cutting measures. The CEO then made an appearance on national financial television that only confirmed for those already sure that not just the US, but planet earth is going into economic recession.

Ever get held with your arms behind your back with some guy you know who can knock your block off about to tee off on you? Really rots. You know it's going to hurt. You try not to bite your tongue. You know that your nose is history and some teeth might also be. Your ribs and especially your jaw are what you worry about at the start. Trying to stay conscious and hoping you don't die is what comes next. That's where the market is. A couple punches in, but with at least a few haymakers still to go.

As if a hotter-than-expected August core inflation data at both the consumer and producer levels were not enough. First out of the gate on Thursday was the Census Bureau's August report for Retail Sales. The headline print hit the tape at month-over-month growth of 0.3%, but July was revised from 0.0% growth to a 0.4% decline. The core print (ex-autos) revealed an ugly truth. Without autos, August retail sales printed at -0.3% month over month, while July (ex-autos) was revised from +0.4% to 0.0%. Remember, retail sales are not adjusted for inflation, so flat is negative in real terms. Within the report, for the month of August, non-store retailers (a proxy for Internet commerce) underperformed department stores, not kidding (see FDX).

As for September New Orders, which is the most important component in any manufacturing survey, New York showed very slight expansion coming off of a disastrous August and Philly showed deep contraction, coming off of an already contractionary August. Unfilled Orders contracted in both regions, as did the average workweek. Remember, demand for hours worked tends to contract ahead of actual payroll reduction. Pricing expanded in both regions, though the pace of that acceleration appeared to slow.

Then came August Industrial Production, which is published by the Federal Reserve. Headline industrial production printed at -0.2% month over month. The street had been looking for +0.2%. The weakness was in Utilities Production, which dropped 2.3% month over month as Mining Production stayed flat from July and Manufacturing Production actually gained 0.1%. Capacity Utilization for August printed at 80% (still a strong number), down from 80.2% and below expectations for 80.2%. Notably, it was again Utilities that spit the bit, as capacity utilization for Utilities dropped from July's 74.7% to 72.8%. Mining utilization dropped small while manufacturing utilization printed flat from July.

What Does It All Mean?

For starters, the Atlanta Fed revised its GDPNow real-time snapshot model for third-quarter GDP down to +0.5% (quarter over quarter, seasonally adjusted annual rate) from +1.3%. Atlanta was forced to seriously reduce inputs for real personal consumption expenditures as well as real gross private domestic investment. These negatives more than offset a slight increase made to the input for real government spending.

An ominous signal was emitted by the spread between the yields for the US 10-Year and Two-Year Notes.

That spread broke through a rising support line earlier this week and has sunk rapidly to its most inverted level since early August over the course of just a few days. Does this signal recession? It can. Is the US already in recession? I think we all know that we are, and when "they" actually make that call, the recession will be dated back to the start of the calendar year.

For those holding out hope that a recession might still be avoided, the spread between the yields of the US 10-Year Note and the US Three-Year T-Bill remains uninverted and has not inverted since early 2020. The San Francisco Fed has published material citing this particular spread as the most accurate predictor the Fed has as far as projecting economic contraction is concerned.

The longer it lasted the worse it got for equities on Thursday. Stocks had actually put up their dukes for much of the session prior to conceding to the bears. The Nasdaq 100 gave up 1.71% for the day, the worst among major equity indexes, as the Philadelphia Semiconductor Index surrendered 1.62%. The Dow Jones US Software Index was smacked around to the tune of 3.31%, led lower by Adobe's (ADBE) 16.79% beat-down. The Nasdaq Composite and S&P 500 gave up 1.43% and 1.13% respectively. Smaller-cap stocks outperformed as the Russell 2000, S&P 400 and S&P 600 all lost less than 1%. Banks did well for the session as bond yields rose. The KBW Bank Index, nearly alone in the green, gained 1.37% for the session.

Nine of the 11 S&P sector SPDR ETFs shaded red for the day, with four giving up at least 2%. Only Health Care (XLV) and the already mentioned Financials (XLF) shaded green.

Breadth was expectedly poor. Losers beat winners at the New York Stock Exchange by almost 7 to 3 and at the Nasdaq Market Site by almost 3 to 2. Advancing volume took a 35.3% share of composite NYSE-listed trade and a 39.7% share of that metric for Nasdaq-listed names. Trading volume remained rather heavy. NYSE names were slightly more active on Thursday than on Wednesday, Nasdaq names were slightly less active. Aggregate trading volume across both the S&P 500 and the Nasdaq Composite in each case has surpassed their respective 50-day trading volume simple moving averages (SMAs) for a third consecutive day. That matches how many times the S&P 500 surpassed that line in July and August combined. 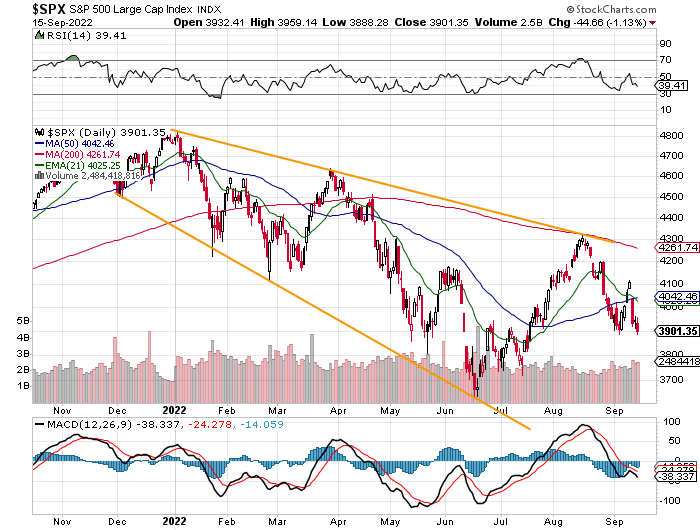 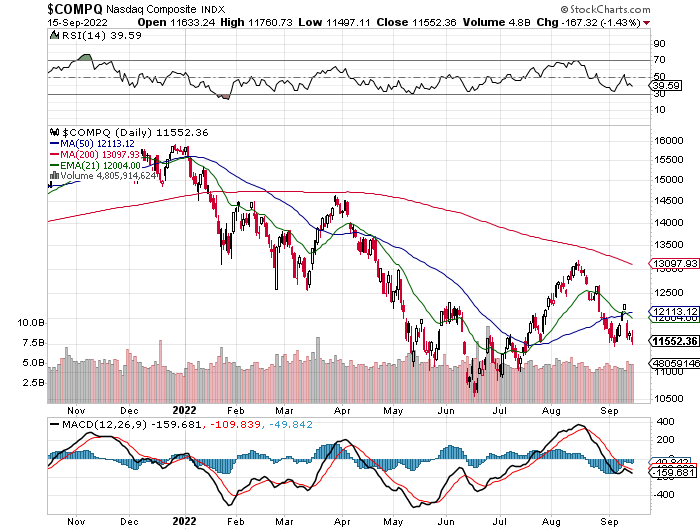 It is paramount for the bulls (if there are any left) that these two key indexes hold the line and do not make a lower low on Friday than they had last week. As readers can see, they both came within a whisker of doing so on Thursday.

Friday is a "triple witching" expiration. Remember, we don't do "quadruple" expirations anymore and have not since September 2020 when the OneChicago exchange where single stock futures traded closed. Still, trading volume will again be elevated on Friday and markets could be even more volatile. 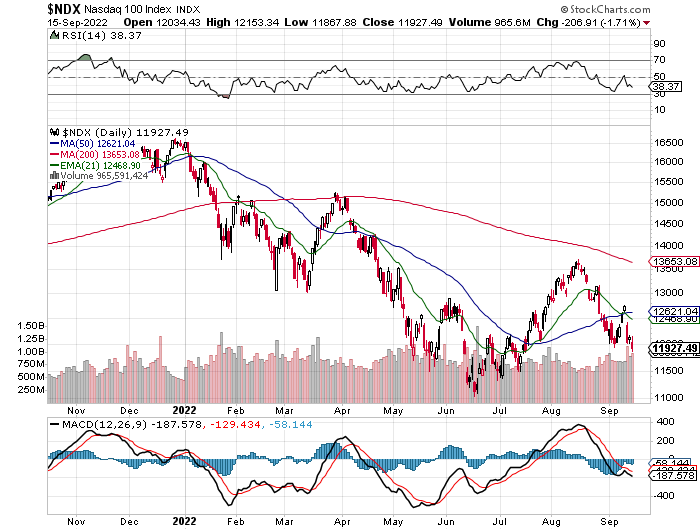 As readers can see here, the Nasdaq 100 has already made a new low for this week, lower than last week's low. The mini "uptrend" that began last week is already technically dead for this particular index.

Fly as high as the sun

We all know what happened to Icarus. Back to FedEx. It pre-announced fiscal first quarter adjusted earnings per share (due next week) of $3.44 versus expectations of roughly $5.14. Revenue is now projected to land at $23.2 billion versus the $23.52 billion that Wall Street had in mind. FedEx also took its view for fiscal second-quarter adjusted EPS down to $2.75 from the consensus view of $5.45 to $5.50, and fiscal second-quarter revenue down to a range of $23.5 billion to $24 billion from the street's consensus of almost $24.9 billion.

FedEx cites weakness in Asia and service problems in Europe. FedEx Ground, which mostly handles e-commerce delivery within the US, has also been much weaker than expected. FedEx has withdrawn its full-year guidance, will close five corporate office facilities and more than 90 FedEx Office locations, will implement a hiring freeze, consolidate sort operations and park some cargo aircraft. I see the stock trading off a rough 20% ($41-ish) overnight.

Quoted by Bloomberg News, Greg McBride, who is chief financial analyst at Bankrate.com, said, "The increase in mortgage rates since the beginning of the year has had the same impact on affordability as a 28% increase in home prices -- and that's on top of the already heady appreciation seen over the past couple of years."