With the threats of cyberattacks from Russia looming, Jim Cramer spoke with George Kurtz, co-founder and CEO of CrowdStrike Holdings (CRWD)  in his second Executive Decision segment of Thursday's Mad Money program.

Kurtz said that cyber attacks are now a critical element of modern warfare, and since most of our digital infrastructure is privately owned, everyone needs to be ready for what might come.

CrowdStrike helps secure 14 top 20 banks, Kurtz said, but the executives he's spoken to are concerned about what Russia might unleash in retaliation for sanctions against them. So-called "wiper" attacks are now becoming common where attackers just wipe systems clean. Companies affected by these attacks suddenly find that everything is gone and nothing works, including computers, phones, key cards and more.

When asked about our electric grid, Kurtz noted that for decades the philosophy was "if it ain't broke, don't fix it," but now utilities find themselves with older technology that's very hard to upgrade.

Let's check out the charts and indicators for any malware or better yet uptrends.

In our Jan. 11 review we wrote that "CRWD is still in a downtrend but we are seeing some positive clues. CRWD needs to make a higher low and a higher high to turn the trend positive. Until we see this kind of price movement unfold I would prefer to stand aside."

In the daily bar chart of CRWD, below, we can see the shares remained weak into late January and then bounced and made a retest of the January nadir. Thursday's price action is a large outside day and higher close -- something futures traders pay a lot of attention to. Prices rallied to the underside of the declining 50-day moving average line, which is good, but we need to see a close above the February highs to know that a rally is underway.

The On-Balance-Volume (OBV) line shows some uneven improvement from late December. The Moving Average Convergence Divergence (MACD) oscillator has made a higher low from December to January for a bullish divergence when compared to the price action. Crossing above the zero line will be a new buy signal when it occurs.

In the weekly Japanese candlestick chart of CRWD, below, we can see that the last two candles comprise a bullish engulfing pattern. Prices are still well below the declining 40-week moving average line but we know this is a lagging indicator.

The OBV line shows some slight improvement from January and the MACD oscillator has begun to narrow telling us that the power of the downtrend is waning.

In this daily Point and Figure chart of CRWD, below, we can see a potential downside price target in the $135 area. A rally to $192 is needed to restart an uptrend. 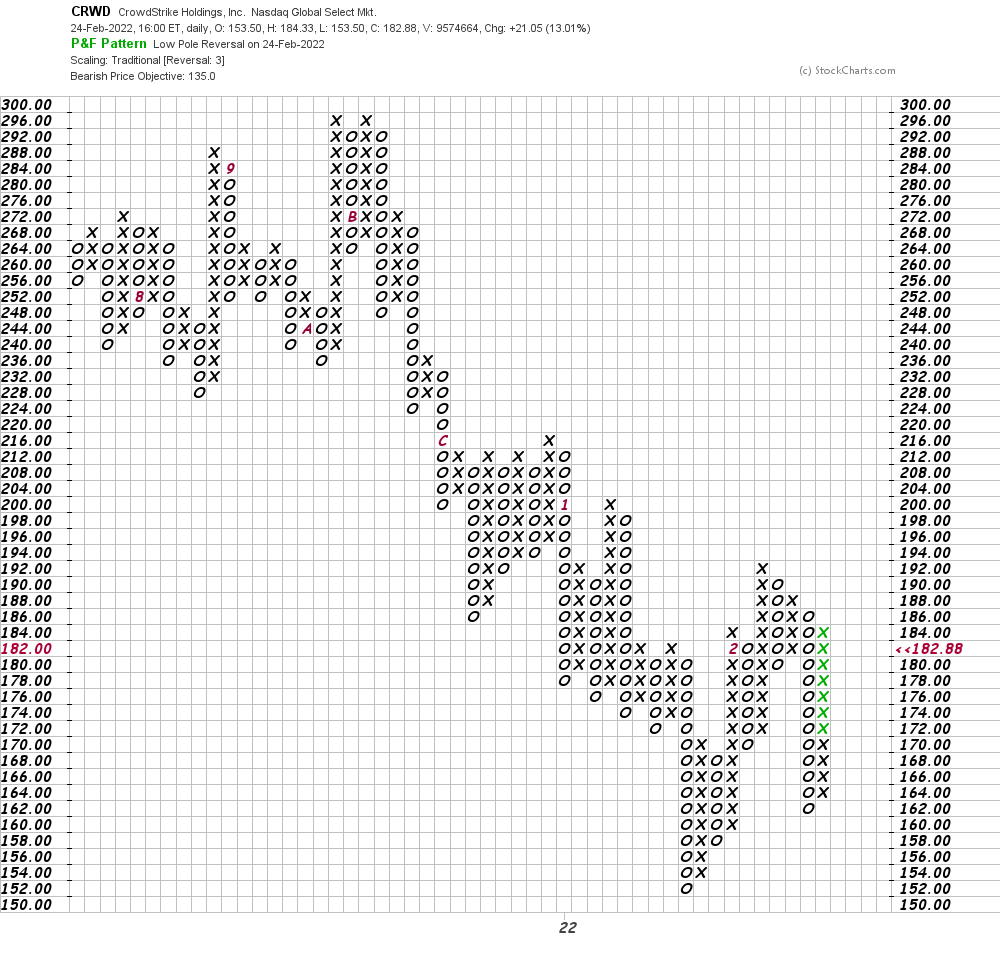 In this weekly Point and Figure chart of CRWD, below, we used close only price data. Here the software suggests we could see a rally to the $218 area.

Bottom-line strategy: Aggressive traders could use available intraday weakness to go long CRWD. Risk to $165. On the upside, CRWD could rebound to $218 and then the $230+ area in the next few weeks.

Get an email alert each time I write an article for Real Money. Click the "+Follow" next to my byline to this article.
TAGS: Investing | Stocks | Technical Analysis | Terrorism | Cybersecurity | Software & Services | Technology | Mad Money | Executive Interview