Looking at your calendar of who will be reporting earnings this week? Wednesday brings results from CrowdStrike Holdings  (CRWD) , the cybersecurity stock that's in high demand as cyber-attacks ramp up.

We took a look at CRWD on Feb. 25, writing that "Aggressive traders could use available intraday weakness to go long CRWD. Risk to $165. On the upside, CRWD could rebound to $218 and then the $230+ area in the next few weeks."

CRWD rebounded above $200 but Monday's decline is making us nervous as our stop was almost reached. so let's check the charts again.

In the daily bar chart of CRWD, below, we can see that prices have been more volatile in recent weeks and sometimes this kind of price action can be indicative of prices bottoming. CRWD is trading back below the 50-day moving average line after rallying above it.

The trading volume appears to be more active the past three months and the On-Balance-Volume (OBV) line shows a rise the past two months suggesting that buyers of CRWD are being more aggressive. The 12-day price momentum study shows higher lows from December to January to February, which tells us that the pace of the decline has slowed. A downtrend slows because farsighted investors have stepped in to be buyers.

In the weekly Japanese candlestick chart of CRWD, below, we can see a couple of lower shadows below $160 as traders rejected those prices. The slope of the 40-week moving average line is still negative and it will be some time before that changes.
The OBV line has been in a gentle decline since July. The Moving Average Convergence Divergence (MACD) oscillator is bearish but it has been narrowing closer and closer to a cover shorts buy signal.

In the daily Point and Figure chart of CRWD, below, we can see a potential downside price target of $125. A trade at $160 is probably going to refresh the downtrend. 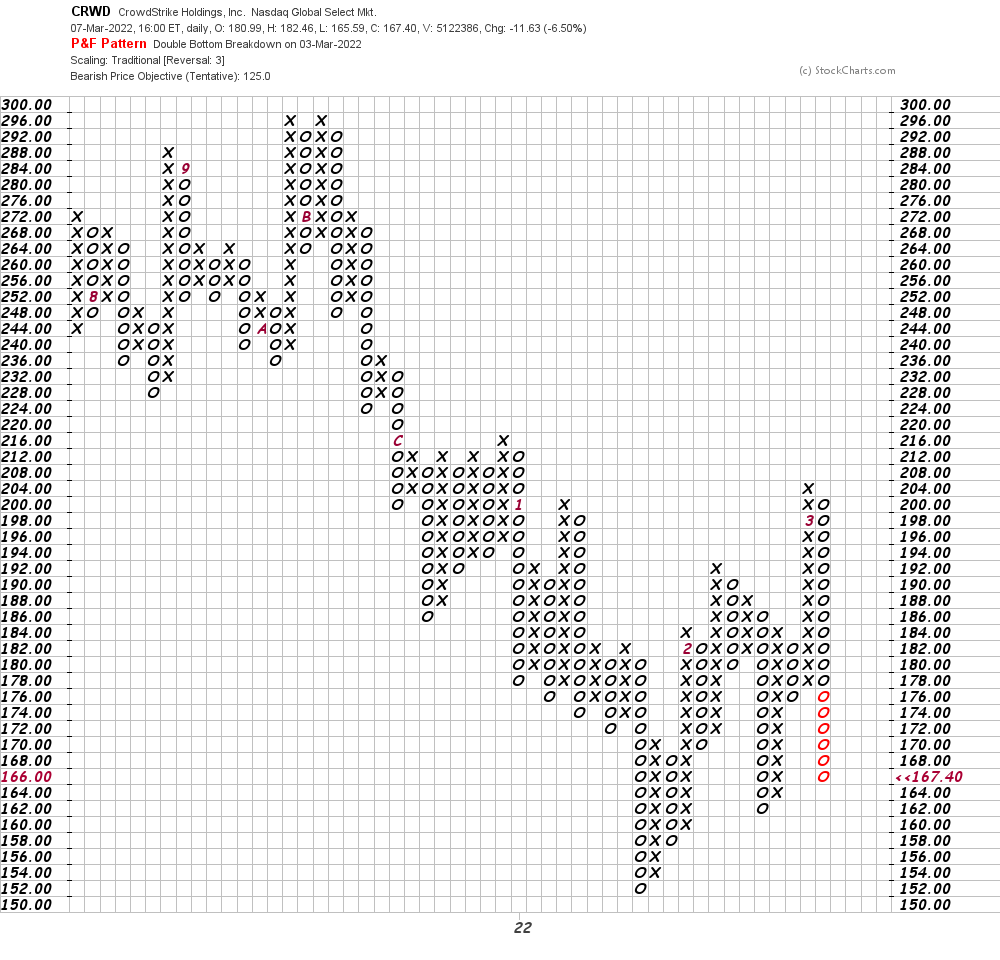 This weekly Point and Figure chart of CRWD, below, now shows the $305 area as a potential target.

Bottom-line strategy: I have no special knowledge of what CRWD is going to report on Wednesday. Traders who are still long CRWD should continue with the stop at $165. Weakness in the broader market averages could cause our stop to be elected.
Get an email alert each time I write an article for Real Money. Click the "+Follow" next to my byline to this article.
TAGS: Investing | Stocks | Technical Analysis | Cybersecurity | Software & Services | Technology | Earnings Preview