Kurtz said cyberattacks have increased since the war in Ukraine broke out. He said attackers hope the invasion will be a distraction for companies and will allow them to gain access. Concerns around financial institutions in particular have risen since sanctions have taken effect, he said.

Cramer noted that while CrowdStrike trades at a lofty 20 times earnings, this is one company that is worth it.

I reviewed the charts of CRWD on March 8 and wrote before its earnings report, "I have no special knowledge of what CRWD is going to report on Wednesday. Traders who are still long CRWD should continue with the stop at $165. Weakness in the broader market averages could cause our stop to be elected."

Let's check and see if things have changed much.

In this daily bar chart of CRWD, below, we can see that prices probed the $160-$150 area three times since late January and each time it looks like buyers stepped in to rally the stock. Prices are now above the still-declining 50-day moving average line. The slope of the 200-day line is negative and the average intersects up around $230. The On-Balance-Volume (OBV) line has been zigzagging higher the past two months and that is an improvement. The Moving Average Convergence Divergence (MACD) oscillator is ready to cross above the zero line for a new outright buy signal.

In this weekly Japanese candlestick chart of CRWD, below, we can see three lower shadows in recent weeks as traders rejected the lows. Trading volume is beginning to pick up. The slope of the 40-week average line is still negative. The OBV line has been edging up slowly since early January. The MACD oscillator is about to cross upward for a cover shorts buy signal.

In this daily Point and Figure chart of CRWD, below, we can see the software is still generating a downside price target. Now $105. A trade at $208 may be needed to turn this chart bullish. 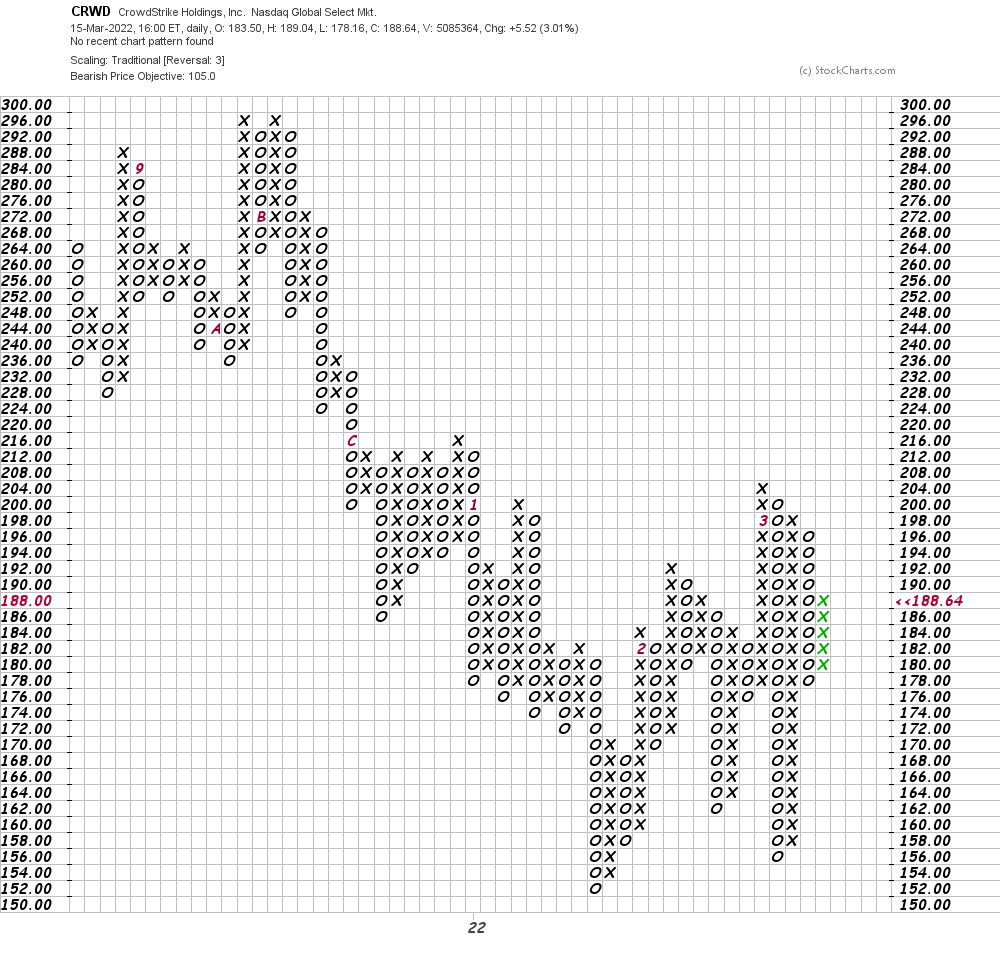 In this weekly Point and Figure chart of CRWD, below, we can see a potential upside price target in the $305 area.

Bottom line strategy: CRWD shares decline to hit our recommended sell stop so I will assume that traders were stopped out just before CRWD gapped higher. The charts look a bit better now but I am not ready just yet to recommend repurchase of CRWD. Stay tuned.

Get an email alert each time I write an article for Real Money. Click the "+Follow" next to my byline to this article.
TAGS: Investing | Stocks | Technical Analysis | Cybersecurity | Software & Services | Mad Money | Executive Interview | Real Money