Cybersecurity firm CrowdStrike Holdings (CRWD) was in the news Friday as the U.S. Department of Defense (DoD) officially granted CrowdStrike Impact Level 4 authorization, which means that it can better access controlled unclassified information (CUI) at the federal level. Accordingly, this provides CrowdStrike with deeper insights into confidential government files, allowing the company to better protect them.

Adding to the attention on Wall Street, Deutsche Bank, Mizuho and Baird raised their price targets for the company's share price.

In our March 16 review we wrote that, "CRWD shares declined to hit our recommended sell stop so I will assume that traders were stopped out just before CRWD gapped higher. The charts look a bit better now but I am not ready just yet to recommend repurchase of CRWD. Stay tuned."
Let's check out the charts and indicators again.
In the updated daily bar chart of CRWD, below, we can see that the shares rallied further in late March to test the underside of the declining 200-day moving average line. Prices retreated about $20 and then rallied Friday to the underside of the 200-day line again. CRWD has pulled back from its early high suggesting we are seeing some profit-taking as some of this news (above) may have been anticipated. Intraday we should see a noticeable upper shadow if we looked at a candlestick chart. A strong close above the 200-day line would be a positive.
The slope of the 50-day average is positive and the On-Balance-Volume (OBV) line is pointed up, telling us that buyers of CRWD have been more aggressive. The Moving Average Convergence Divergence (MACD) oscillator is above the zero line but has crossed to the downside for a take profit sell signal.

In the weekly Japanese candlestick chart of CRWD, below, we can see that the shares have rallied to the underside of the declining 40-week moving average line. The weekly OBV line shows only a modest rise the past three months.
The MACD oscillator is below the zero line and shows just a cover shorts buy signal.

In this daily Point and Figure chart of CRWD, below, we can see a potential upside price target of $269, but a trade at $236 is needed to refresh the uptrend. A trade at $204 would be bearish. 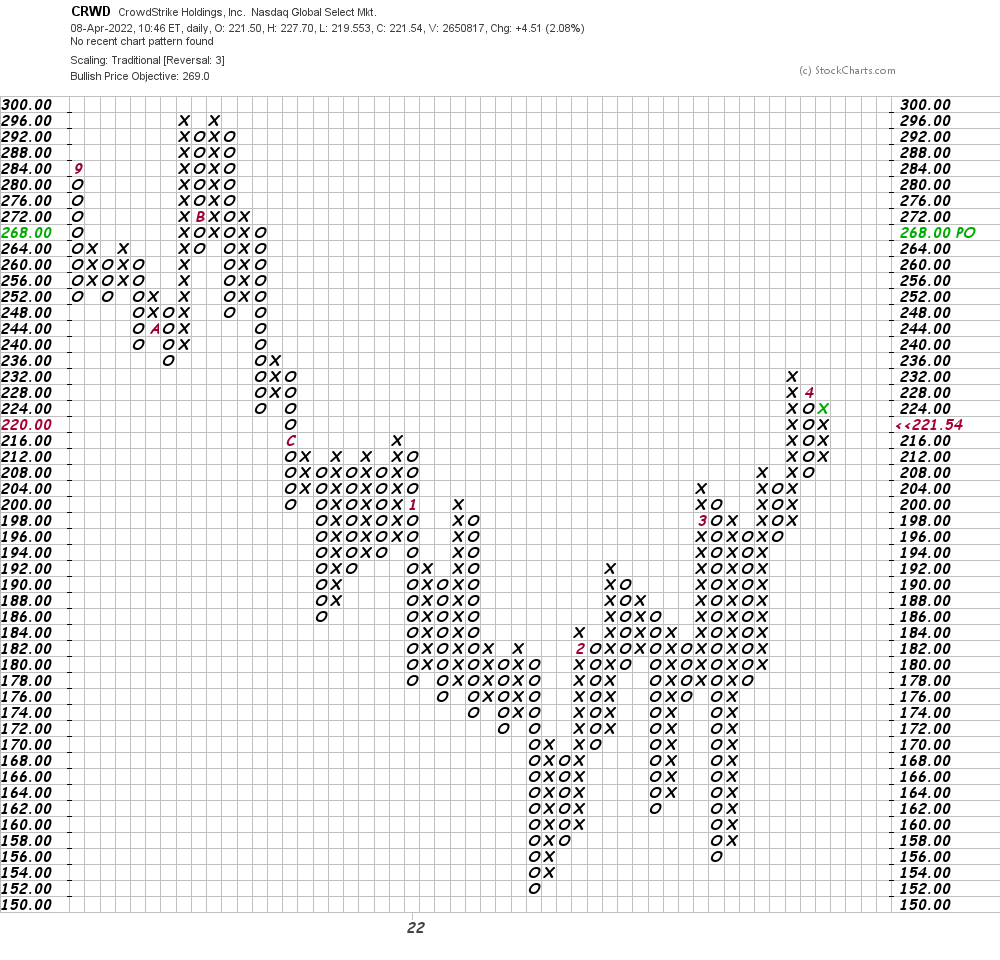 In this second Point and Figure chart of CRWD, below, we used weekly price data. Here the chart shows the $305 area as a potential price objective.

Bottom-line strategy: CRWD started out strong Friday but I am most concerned about the close. A weak close will mean another failure at the underside of the 200-day moving average line. A strong close on Friday would suggest further upside.
Get an email alert each time I write an article for Real Money. Click the "+Follow" next to my byline to this article.
TAGS: Investing | Stocks | Technical Analysis | Cybersecurity | Technology | Analyst Actions