Cramer said for investors, it's easy to spot technology -- it's what we use every day. And we shouldn't forget the companies that make this digitalization possible. These companies that operate behind the scenes are generating monstrous growth because of this rising demand.

Cramer was referring to the companies such as CrowdStrike Holdings  (CRWD) , which just hit new all-time highs on earnings as demand for cybersecurity continues to climb.

We visited CRWD's charts on Nov. 3, writing that, "I believe that technical analysis can be a great complement to a fundamental story but I also believe that it has limitations like its time frame. I have no basis to make a recommendation years out but I can see going long CRWD in the $115 area." CRWD dipped further in the first part of November and then restarted its uptrend as the month went on.

Let's check out the charts of CRWD again.

In the daily bar chart of CRWD, below, we can see that the shares are now back above the rising 50-day moving average line. The 200-day line is also rising.

The On-Balance-Volume (OBV) line has been steady the past six months but is close to making a new high for the move up. The Moving Average Convergence Divergence (MACD) oscillator is bullish now and has been for most of the time since April.

In the weekly bar chart of CRWD, below, we do not have more price history to work with but the time frame still shows us a bullish picture. Prices are above the rising 40-week moving average line.

The weekly OBV line has a positive trend and the MACD oscillator is constructive, too.

In this Point and Figure chart of CRWD, below, we can see an upside breakout and a potential $203 price target. 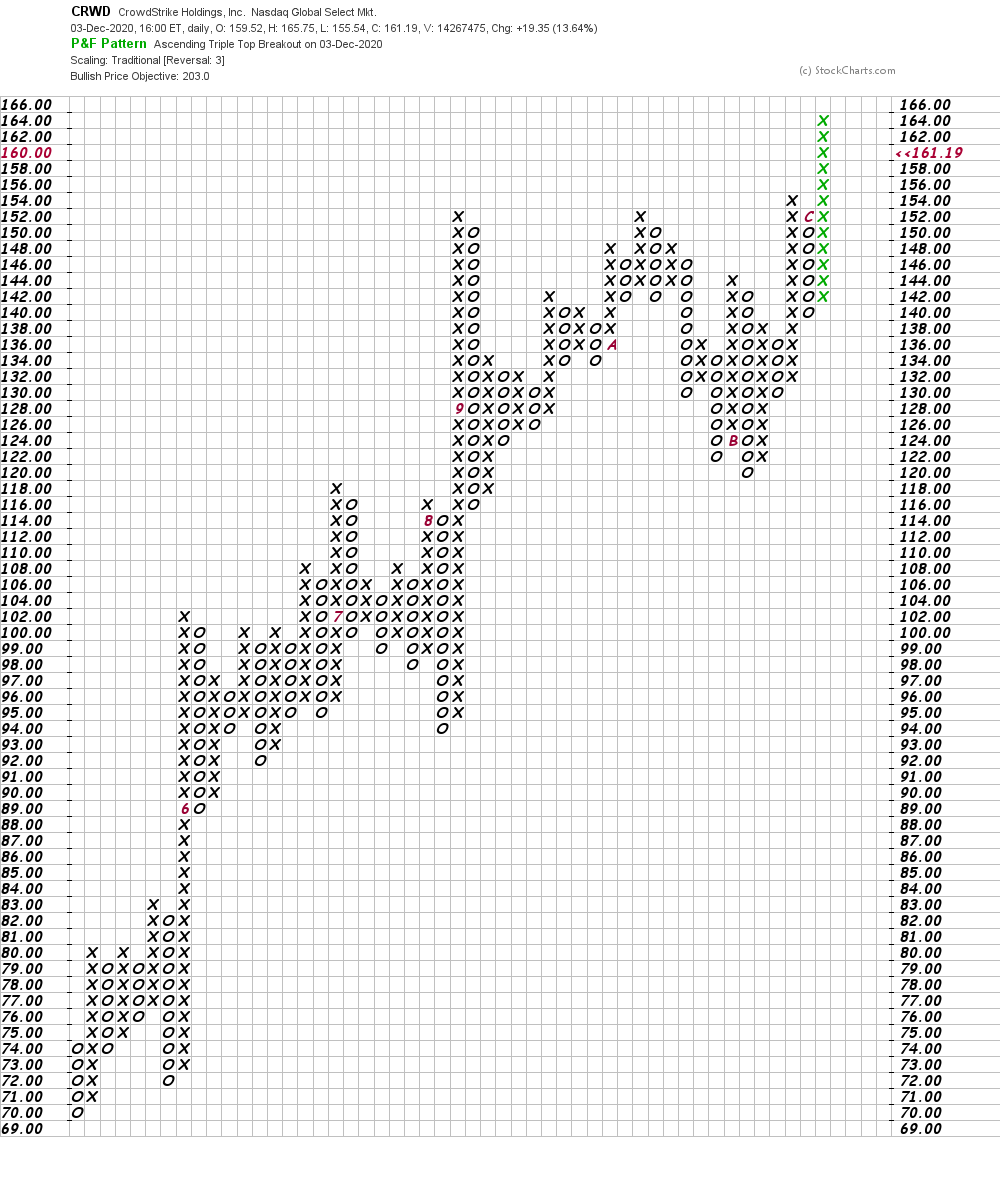 In this weekly Point and Figure chart of CRWD, below, we can see a potential price target of $253.

Bottom-line strategy: Assuming some traders went long CRWD on weakness in the first half of November, use a sell stop at $121. Our first price target is $203.

Get an email alert each time I write an article for Real Money. Click the "+Follow" next to my byline to this article.
TAGS: Investing | Stocks | Technical Analysis | Cybersecurity | Technology | Mad Money

Jim Cramer: Why Do I Love Fintechs? Because It's Better to Be With the New

But I never had anything definitive until Monday when Jamie Dimon was interviewed about the financial tech competition.

For example, consider stocks that should benefit from our ever-increasing digital lifestyle.

Our Technical Strategy on MicroStrategy

I've made a few buys but there just isn't much appetite for chasing strength right now.