Kurtz explained that as more companies embrace their digital transformation, security remains a crucial part of their focus.

Kurtz added that while many people think of security only for PCs and servers, CrowdStrike also offers cloud workload protection and that's why CrowdStrike has partnered with Amazon Web Services (AMZN) and more recently with Zoom Video (ZM) to protect their cloud infrastructure.

When asked who's doing all of the hacking, Kurtz said all of the usual suspects remain at work, from nation states to online criminals to hacktivists trying to make a statement. He said online criminal activity has been on the rise.

Let's check out the charts of CRWD again.

We looked at CRWD on August 31 and said that, "Traders who are still long could raise stop protection to a close below $105. The next price targets are $139 and then $173." Prices rallied to $153 and pulled back since our last look at the charts.

In the updated daily bar chart of CRWD, below, we can see that the shares broke out on the upside of a two to three-month consolidation pattern in recent days and pulled back to retest the top end of this pattern from $95 to $120. Trading volume was heavy on the upside breakout and that is a good sign but also pretty heavy on the pullback.

The On-Balance-Volume (OBV) line moved up sharply and pulled back sharply. I would want to watch the movement of the OBV line day by day to see if it resumes its longer-term rise. The Moving Average Convergence Divergence (MACD) oscillator temporarily dipped below the zero line in August but moved back above it before long.

In this weekly bar chart of CRWD, below, we see a bullish picture. Prices are above the rising 40-week moving average line.
The weekly OBV line is strong and so is the MACD oscillator.

In this daily Point and Figure chart of CRWD, below, we can see that prices met and exceeded an upside price target of $139. 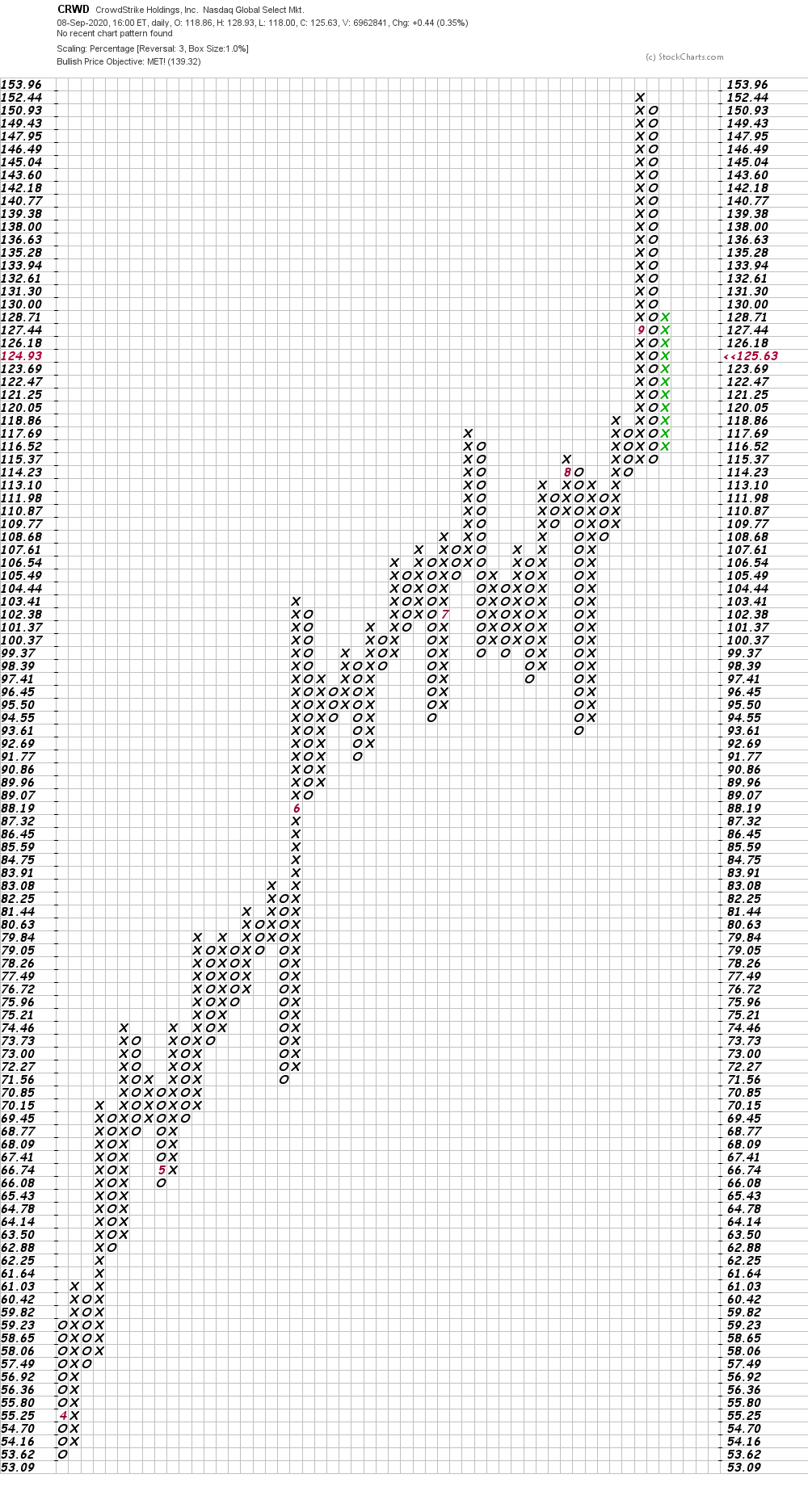 In this weekly Point and Figure chart of CRWD, below, we can see that the software is projecting a potential longer-term price target in the $288 area.

Bottom-line strategy: Continue holding the longs recommended previously. Continue with the risk point of a close below $105. The $173 area is our first price target with $200 and perhaps $288 longer-term.
Get an email alert each time I write an article for Real Money. Click the "+Follow" next to my byline to this article.
TAGS: Earnings | Investing | Stocks | Technical Analysis | Cybersecurity | Mad Money | Executive Interview