In his final "Executive Decision" segment of Mad Money Wednesday night, Jim Cramer sat down with Mike Gorenstein, chairman, president and CEO of Cronos Group (CRON) , the cannabis company with shares that have fallen from their highs of $25 in early February to just under $11 Wednesday as the group has fallen out of favor.

Gorenstein there are a lot of CBD companies out there, but very few CBD brands. That's why Cronos focuses on intellectual property and brands, using the same "asset light" model that established consumer goods and pharmaceutical companies use.

When asked about the recent vaping controversy, Gorenstein noted that nicotine and cannabis are very different products and in Canada, cannabis vaping products are not yet allowed to be sold.

Cramer said when you speculate on a stock like Cronos, you're going to get ups and downs like the industry has seen over the past year.

Let's check out the ups and downs of the charts.

In the daily bar chart of CRON, below, we can see the seven-month slide in prices. CRON is now below the declining 50-day moving average line and the cresting 200-day line. In early August the 50-day line moved below the 200-day line for what is commonly called a dead or death cross.

Trading volume was heavy into the run up to $25 in early February but it has been light since the peak and the On-Balance-Volume (OBV) line has only declined modestly telling us that prices have fallen of their own weight.

The 12-day price momentum study in the lower panel has not yet shown us a bullish divergence to suggest that the decline is slowing.

In the weekly bar chart of CRON, below, we can see that if you recognized the cannabis rally early and exited as prices turned parabolic you probably made some handsome returns. Timing is key. CRON is now below the cresting 40-week moving average line.

The weekly OBV line is pointed down and tells us, unlike the daily chart, that sellers have been more aggressive. The Moving Average Convergence Divergence (MACD) oscillator is in a bearish mode below the zero line.

In this daily Point and Figure chart of CRON, below, we can see a downside price target of $10.58. The $10-$8 area is probably next chart support. 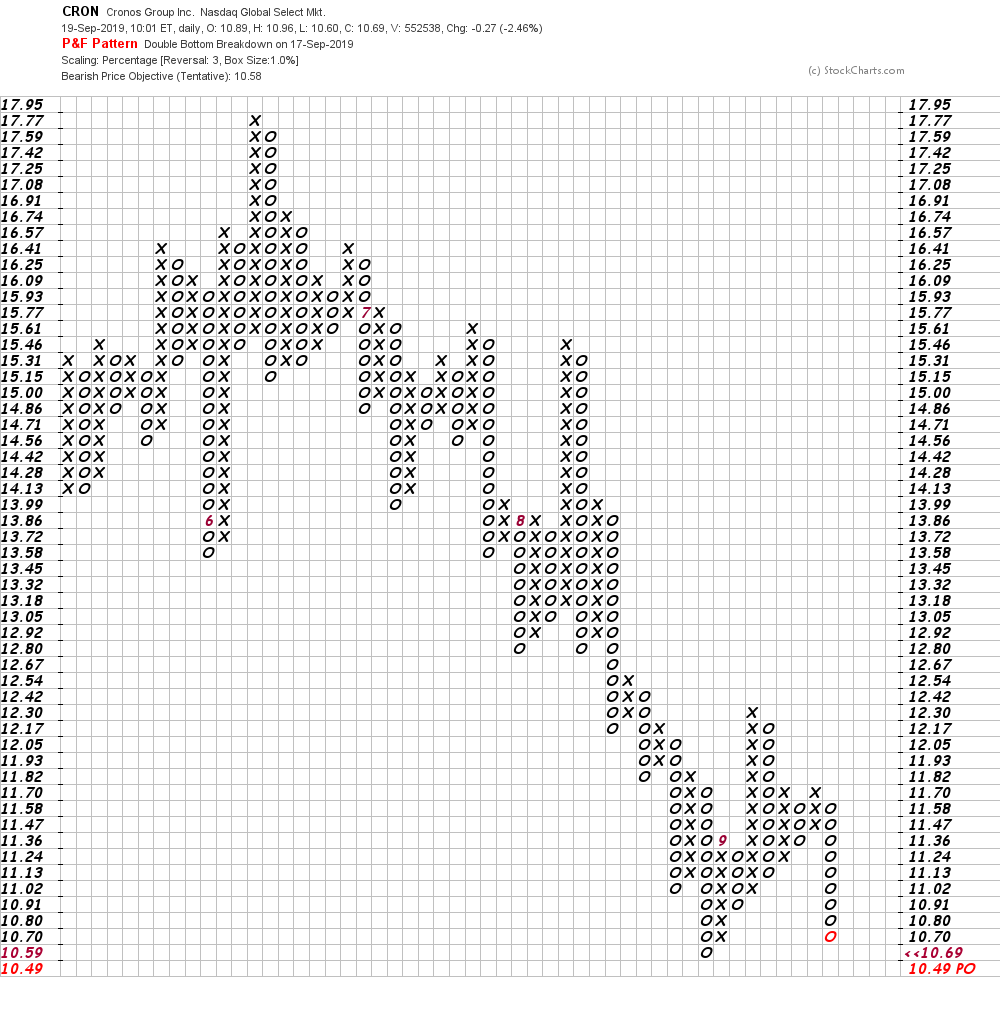 Bottom-line strategy: CRON is pointed down and we could see prices drift into the $10-$8 area in the weeks ahead. Wait for a new base to develop before considering a long position.

Get an email alert each time I write an article for Real Money. Click the "+Follow" next to my byline to this article.
TAGS: Investing | Stocks | Technical Analysis | Mad Money | Executive Interview | Cannabis

Taking a chunk of Pfizer during this selloff, while Amazon has raised $10 billion in mixed-maturity debt and all eyes are on the government's response to civil unrest in the U.S.

Not So Jolly on the Rally, Are We?

Let's look at why Monday's action seemed to inspire so little joy, despite good breadth, a small increase in new highs and the small caps playing along.