In light of the recent volatile market conditions, Cramer opened the phone lines during Tuesday night's Mad Money program to hear what was on the mind of Cramerica.

When asked if IBM  (IBM) was still a safe dividend stock, Cramer said IBM's yield was safe and the company also has the cash to do more acquisitions like Red Hat, Inc. (RHT) .

In the daily bar chart of IBM, below, we can see some new developments. IBM is trading below the declining 50-day moving average line and below the bottoming 200-day line.

Prices have declined the past four weeks, but the daily On-Balance-Volume (OBV) line has been steady, suggesting traders and investors in IBM have not turned into aggressive sellers.

The Moving Average Convergence Divergence (MACD) oscillator is below the zero line, but it should not take much of a rally to improve this indicator.

In the weekly bar chart of IBM, below, we can see a downtrend in place from early 2017 -- lower highs and lower lows.

Prices have closed back below the declining 40-week moving average line, but it looks different than the previous declines. The prior declines were quick and deep, but this current bout of weakness has not been swift or deep, which suggests that something is different this time.

The weekly OBV line shows only a shallow decline in recent weeks, and the MACD oscillator is poised with its two averages touching -- we could see a crossover or not.

In this point and figure chart of IBM, below, we can see a strong rally this year and only a shallow pullback in late April (look for the 4 on the chart). A longer-term potential upside price target of $219 is being indicated. 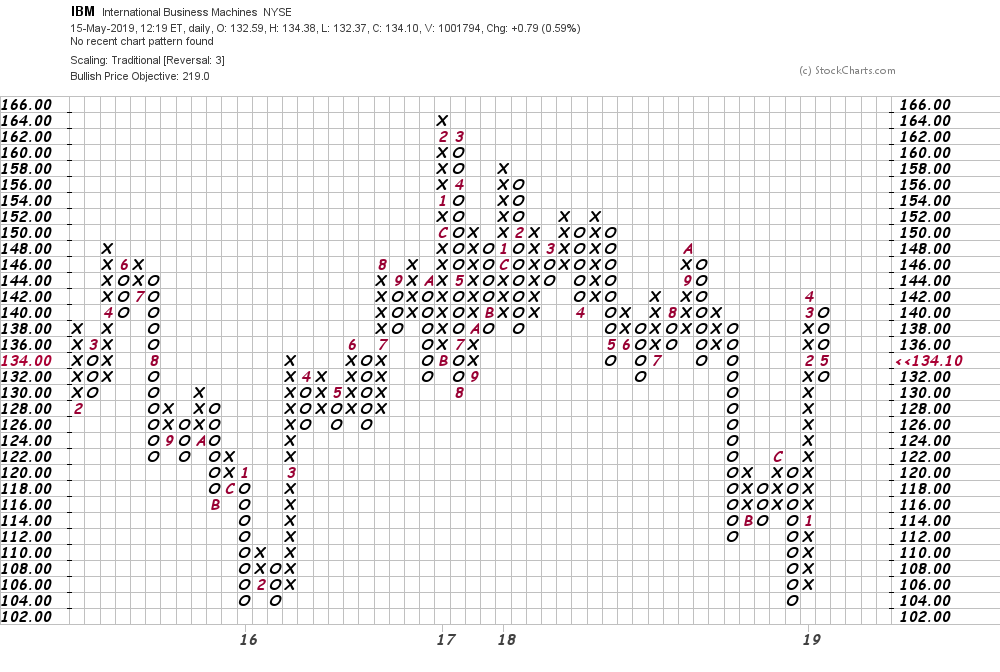 Bottom-line strategy: Is IBM in the process of a fundamental turnaround? I have no idea, but a $219 point and figure target has my attention. Investors can think about probing the long side of IBM on strength. Risk a close below $125.

Get an email alert each time I write an article for Real Money. Click the "+Follow" next to my byline to this article.
TAGS: Dividends | Investing | Stocks | Technical Analysis | United States | Mad Money