"A veteran -- whether active duty, discharged, retired, or reserve -- is someone who, at one point in their life, wrote a blank check made payable to the United States of America, for an amount up to and including their life." -- Author Unknown

It doesn't have to be reversed... yet. Nobody is asking for deflation outright, though it may be coming, and with economic growth highly suspect going into 2023, coming sooner than many who sit at the table of the Federal Open Market Committee (FOMC) expect. That said, a healthy serving of disinflation would be very helpful right about now. October inflation, according to the Bureau of Labor Statistics, was still hot, but less hot than previous months, and less hot than had been the professional consensus. Huzzah!

Looking broadly, Energy (+1.8% m/m and +17.6% y/y) prices remained hot in October as did many subcomponents within Energy, such as gasoline and fuel oil. Piped utility gas, however, did decrease 4.6% m/m, despite still being up 20% year over year. Category-specific deflation and disinflation are visible everywhere throughout this report. Prices for commodities, used vehicles, apparel and medical care services all contracted month over month.

The largest takeaway, from my perspective, was in shelter. The BLS gives shelter a 32% weighting when it reports headline CPI and more like a 40% weighting in core CPI. By most accounts that I see, at least anecdotally, rents have stopped rising, as have home prices in the majority of locales that I follow. Yet in the report, prices for shelter are believed to have grown 0.8% month over month (+6.9% y/y). Within "shelter," rent printed +0.7%.

I may be wrong, but I think it more than likely (especially after reading the opinions on the topic of those I consider to be smarter than I) that these numbers are high. I want you to consider this: If shelter (as shelter is of late almost as volatile as energy and food) were excluded from core CPI, or if shelter were excluded from core just because price changes are reported with a serious lag, that core CPI would not have printed in October at +0.3% m/m but fractionally close to 0.0%. Flat. No joke. Let that sink in.

The downside surprise for October inflation that as we have tried to demonstrate could still be erroneously high set financial markets on fire in a good way. Could it be? Could this mean that there could be less pressure on the Fed to remain fairly aggressive?

We know that the committee as a group was at least considering stepping down from the torrid pace of aggressive rate hikes that they had been on. Chairman Powell had indicated in his last post-statement news conference that he thought the Fed may need to push out or raise the terminal fed funds rate. Would this be necessary now? Maybe. Maybe not.

The US dollar fell rapidly in value relative to its reserve currency peers. This put a relentless bid under equity, Treasury and commodity prices that lasted all day on Thursday. Fed funds rate futures trading in Chicago, at last glance, now show an 85% probability for a 50-basis-point rate hike on Dec. 14, to be followed by a couple of 25-basis-point rate hikes, terminating at a range of 4.75% to 5% in March and staying there only through September before starting to unwind. That looks a lot better than it did. That's better for markets. It still might be too aggressive for the US economy, which in terms of labor market strength is really starting to show cracks.

Now, a word about Treasuries. (Bond markets are closed today.) You already know Treasuries rallied, but understand this: With the Fed still increasing short-term rates, T-Bills cannot rally when notes and bonds do. So, while the US 10-Year Note rallied almost all the way to where its yield approached its own 50 day simple moving average (SMA)...

... the legendarily accurate predictor for contracting economic activity, the yield spread between US 10-Year paper and the US Three-Month paper, went even more deeply negative.

This spread is now more negative than it has been at any point since 2019.

That 2019 deep inversion, by the way, came about six months ahead of the recession caused by the pandemic shutdowns. Eerie, isn't it?

For equities, there was an intense effort to regain higher exposure levels across the world of professional portfolio managers. In this electronic age, where large orders are sliced and diced into tiny pieces by high-speed algorithms that race out to multiple points of sale, there is far less pressure to outperform the broader marketplace intraday than there was back in the slower, but from a price discovery perspective, far more efficient and careful (opinion) auction market model.

This allows prices to run wildly in one direction and then keep going, whereas in the past human traders would have walked away at some point. There are days where I will complain about this negative evolution (again, opinion) in market modeling. However, running multiple net-long portfolios, this day will not be one of those.

As for breadth, you're going to love this. Winners beat losers at the New York Stock Exchange by nearly 8 to 1 and at the Nasdaq Market Site by greater than 4 to 1. Advancing volume took an 86.6% share of composite NYSE trade and a 91% share of Nasdaq-listed trading.

Put bluntly, the pros were heavily involved on Thursday and they were buying equities as broadly as they could, and as quickly as they could... all day long. We, as traders, benefited greatly, because we are able to spot a reversal day (Oct. 13) and understand that at least a tradeable bottom has been placed when we recognize confirmation of that change in trend (Oct. 21) when we see it. What a valuable skill set. Thursday's action in essence confirms the confirmation. Rock and Roll. 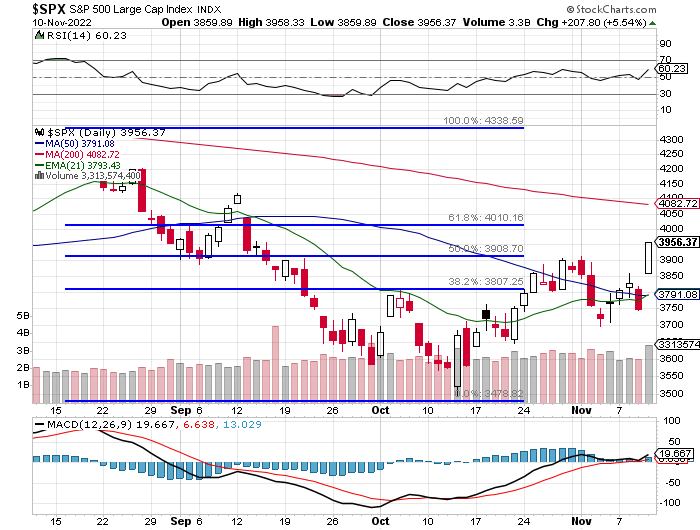 The S&P 500 broke through the 50% retracement level of the August through October selloff on Thursday, creating a new post-reversal high. That 50% retracement level had been stiff resistance. Look for this spot to provide support going forward. Relative strength is improving as is the daily moving average convergence divergence (MACD). Interestingly, the 21-day exponential moving average (EMA) here crossed above the 50-day SMA. This is a mini or swing traders' golden cross and if there is to be some follow through on Friday, this could provide an algorithmic boost. 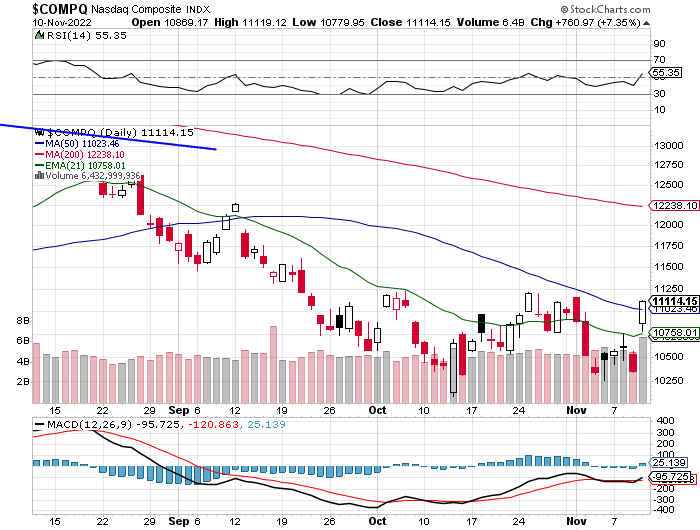 Very important! The Nasdaq Composite not only took down its 21-day EMA on Thursday, but also recaptured its 50-day SMA. Holding that line on Friday with bond markets closed for the holiday could be crucial, as here a new post-reversal high has not yet been made.