Bernshteyn said he was proud of the results this quarter, as the company was able to reduce implementation times and increase overall operational efficiency. He said spend management remains a critical area for most businesses, especially as they cope with supply chain disruptions around the globe.

When asked about those disruptions, Bernshteyn explained that many companies are using Coupa's community intelligence to diversify their supply chains and optimize their spending. Many companies are switching from single-source to multi-source and are renegotiating to deal with changing conditions.

In the daily Japanese candlestick chart of COUP, below, we can see that the shares reversed to the downside after breaking out on the upside and reaching new highs. COUP has declined to close below the rising 50-day moving average line and below the support around $280, which held a number of times in July and August. This former support could reverse roles and turn into resistance as under water longs could become sellers at their entry price.

The On-Balance-Volume (OBV) line has moved lower this month as sellers became more aggressive. The OBV line moved sideways in July and August and diverged from the price action when it went on to new highs.

The slow stochastic indicator in the lower panel is an overbought/oversold indicator. Prices by this measure are oversold so we could see prices bounce. How high and how long they bounce is the key question.

In the weekly Japanese candlestick chart of COUP, below, we can see  a mixed to weak picture. Prices have made a new low for the short-term move down and have broken chart support around $280. Prices are still above the rising 40-week moving average line but this is a lagging indicator.

The weekly OBV line shows July and August slipping lower and that suggests that sellers have been more aggressive for the two months prior to the recent decline. The MACD oscillator has crossed to the downside for a take profits sell signal.

In this daily Point and Figure chart of COUP, below, the software is reading the price action since July (look for the "7" on the chart) as distribution (selling) and is projecting a downside price target around $152. 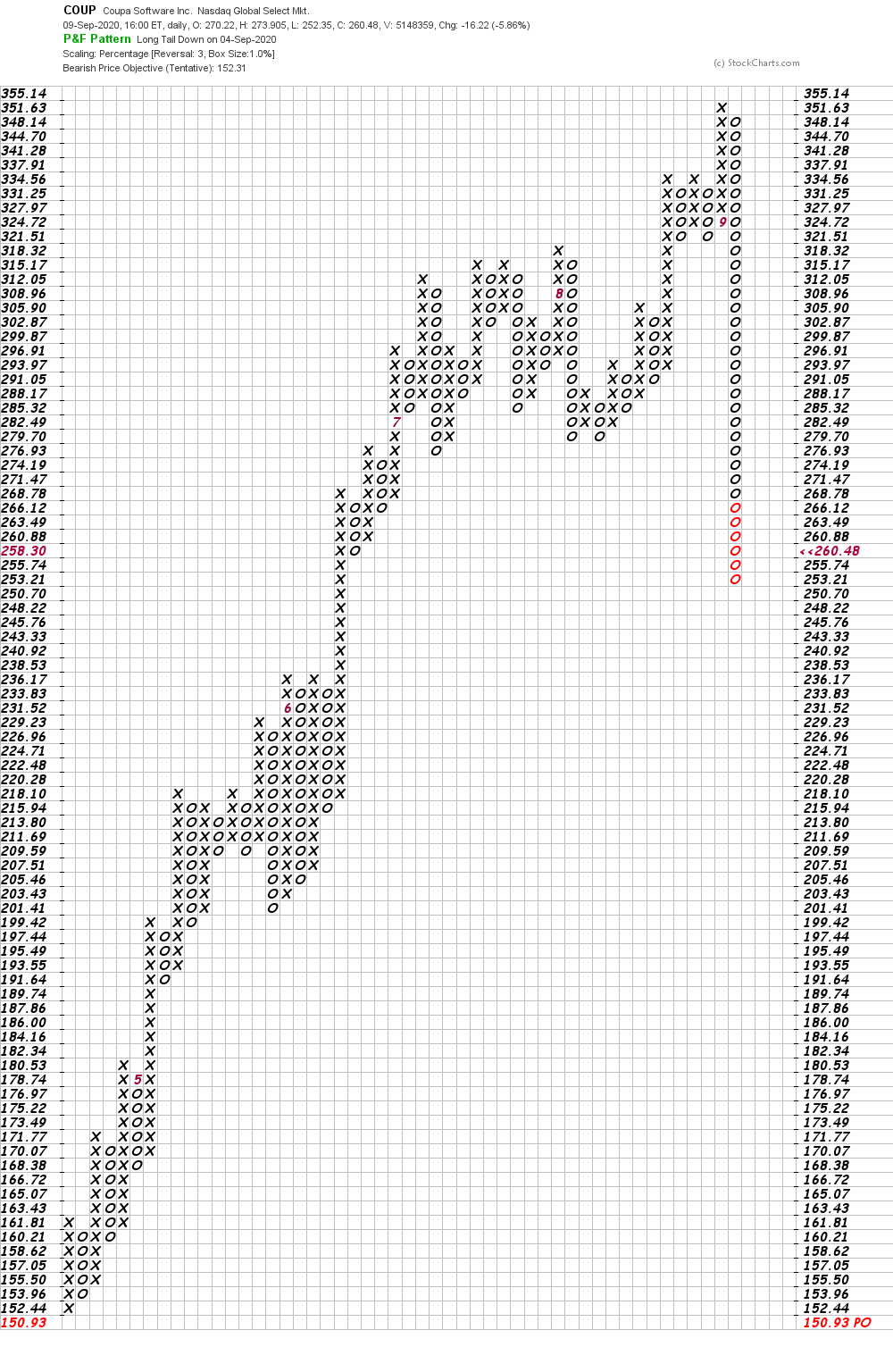 Bottom-line strategy: Charts of COUP began to erode in early July and prices have broken below chart support. The downside price target for COUP from the Point and Figure chart is not very encouraging. Longs should step aside, but in the world of technical analysis nothing is certain so be on alert for an upside reversal as prices are oversold.
Get an email alert each time I write an article for Real Money. Click the "+Follow" next to my byline to this article.
TAGS: Earnings | Investing | Stocks | Technical Analysis | Software & Services | Technology | Mad Money | Executive Interview