By BRUCE KAMICH Sep 03, 2019 | 08:31 AM EDT
Stocks quotes in this article: COUP
Coupa Software Inc. ( COUP) is scheduled to announce second-quarter results after the market close Tuesday. Let's visit the charts and indicators ahead of the reaction.
In this daily bar chart of COUP, below, we can see that prices have more than doubled in less than a year from the small base around $60 where it sat from October to the middle of January. Trading volume has risen since early December to late June to confirm the price action. COUP is above the rising 50-day moving average line, but we can see that prices have been testing that line for the month of August.
The daily On-Balance-Volume (OBV) line shows a rising pattern into July but then the OBV line turns flat to lower, signaling a shift from aggressive buying to aggressive selling. The Moving Average Convergence Divergence (MACD) oscillator signals a take profits sell in the middle of July and a much lower signal in late August.

In this weekly bar chart of COUP, here, we can see that prices are up fivefold from 2017 and COUP is at its widest above the rising 40-week moving average line. The weekly OBV line is bullish and only shows a minor dip in August. The weekly MACD oscillator is crossing to the downside from well above the zero line -- a sign to take profits.

In this Point and Figure chart of COUP, below, we can see a relatively nearby price target in the $128-$127 area. This is not a big deal, but a trade at $127.44 would be a new low for the move down and could precipitate further declines. 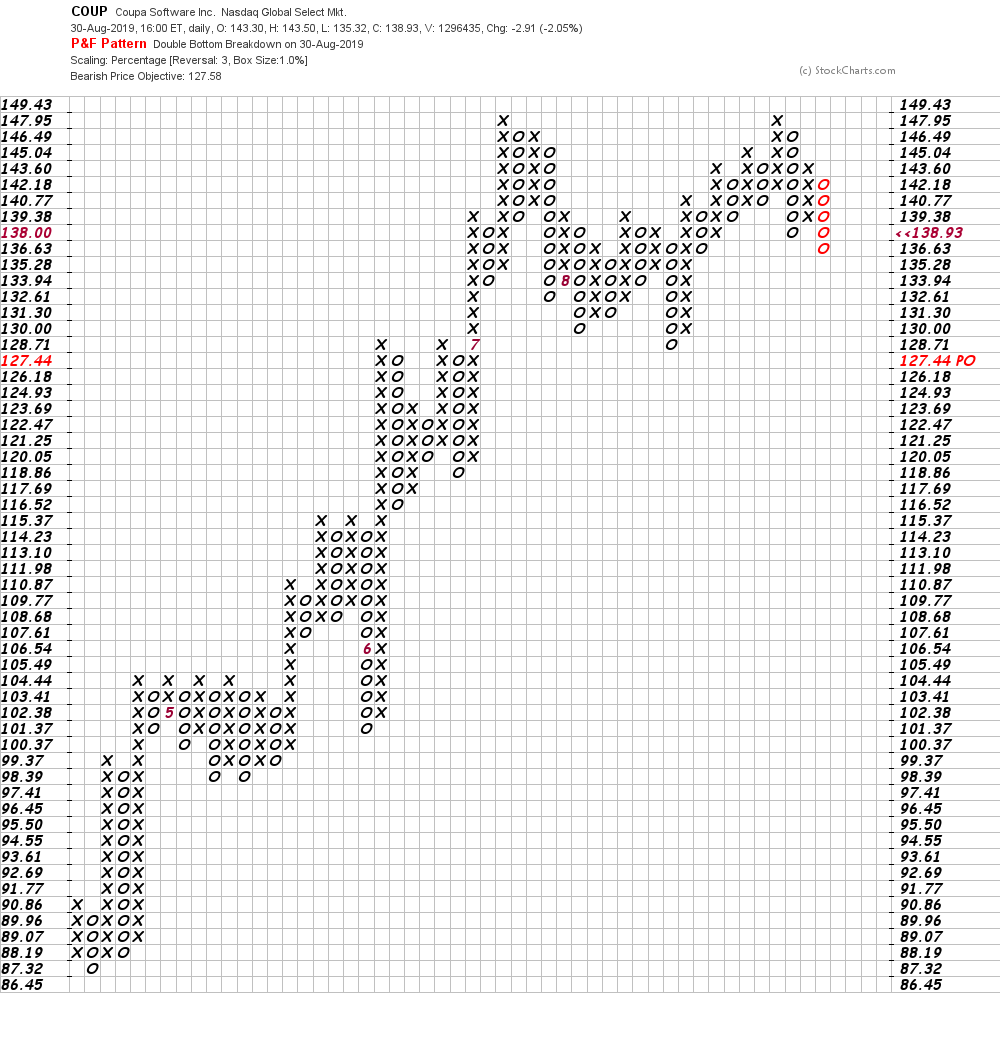 Bottom line strategy: If you have been long COUP for a while then you have done very well with this holding. With some sell signals on the charts above, I would suggest taking some profits here ahead of the release of earnings after the close.
Get an email alert each time I write an article for Real Money. Click the "+Follow" next to my byline to this article.
TAGS: Earnings | Investing | Stocks | Technical Analysis | Software & Services | Technology | Real Money | Earnings Preview