By STEPHEN GUILFOYLE Sep 09, 2019 | 12:17 PM EDT
Stocks quotes in this article: AMGN
The candidate in clinical trial is a first-in-class oral therapy designed to selectively and irreversibly target the KRAS G12C protein. In other words, this is a cancer-fighter. A lung cancer-fighter. What I am talking about is Amgen's ( AMGN)  announcement this weekend from the World Conference on Lung Cancer in Barcelona regarding a phase 1 clinical trial to evaluate AMG 510 in patients with previously treated KRAS G12C-mutated solid tumors. The results to this lay person seem promising. But this is a very small sample size, and, unfortunately, investors had bet on a better response, for the trial, and subsequently for the shares.
There were 34 patients enrolled, with only 23 evaluated for efficacy. Of those 23, only 13 received the target does of 960 mg once a day. Dealing with percents is almost stupid for such a small sample size, but of those 13, seven achieved a partial response at one or more time-points, which if I read correctly would mean that those seven actually saw a reduction in tumor size. The other six experienced stability. That to me reads as 13 of 13 experienced at least control over the disease. I got long on an entry-level sized position after the open in response to that news.

The street was obviously looking for a lot more. Research across the industry had some analysts expecting response rates of 75% -- far higher than the actual rate of seven out of 13. The firm had reported a response rate of five in 10 at American Society of Clinical Oncology back in June, so this may only represent improvement in percentage terms and not in effectiveness. On the bright side, Amgen is expected to offer the next update on this candidate cancer treatment in late September at the European Society for Medical Oncology Congress. One more positive...  there have so far apparently been no dose-limiting toxicities, as well as no adverse events that would lead to discontinuation. That to me, is understated here.

Amgen has struggled along in a range really all year long. As far as growth is concerned, the firm has eeked out pedestrian earnings growth in recent quarters on very stable revenue for multiple quarters. For the full year, earnings are expected to print down small, before returning to substantial growth in 2020. There are a number of data-points that make investing in this name interesting. The shares run at a forward-looking price-to-earnings ratio of less than 13. That makes the shares possibly inexpensive, especially if the company can figure out a good lung cancer treatment. The firm runs with a extremely comfortable Current and Quick ratios, meaning it can pay the bills. Amgen pays an annual dividend of $5.80 (2.8% yield). And it's only 45% owned by funds, meaning plenty of managers out there can still get involved. 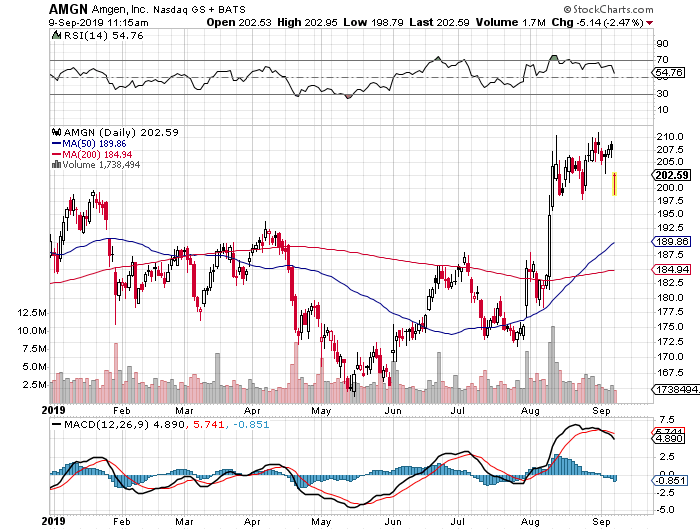 Where would I like to buy the shares? Right at the 50-day simple moving average of
$189.86, given the option. I am not sure if the shares come in that far. That's why I wet the beak this morning. That's also why we invest incrementally. Would I rather make a profit on the small trade entered into Monday, or would I welcome the chance to add lower? Yes. I am an opportunist. Don't forget, the patent headaches that these shares were up against are largely in the past.
The most significant threat to not just this name, but the entire industry, will come from the political sphere, as there are very few friends on either side of the aisle for big pharma. This is, in my opinion, a good company. This is just not a space where one wants to be over-exposed going into the 2020 national elections.
Get an email alert each time I write an article for Real Money. Click the "+Follow" next to my byline to this article.
TAGS: Health Insurance | Investing | Stocks | Health Care Equipment & Services | Pharmaceuticals | Stock of the Day

Two trades I'm making (and one on my radar) as a I stay focused on the price action.