Facebook's (FB) massive cash pile and lack of debt could leave the company in perfect position to poach a player in media, cybersecurity, or payments.

The California-based cash cow currently has $41 billion in cash and investments on the books with absolutely zero debt and its strong earnigns on Wednesday suggest this ratio is only set to gain momentum. 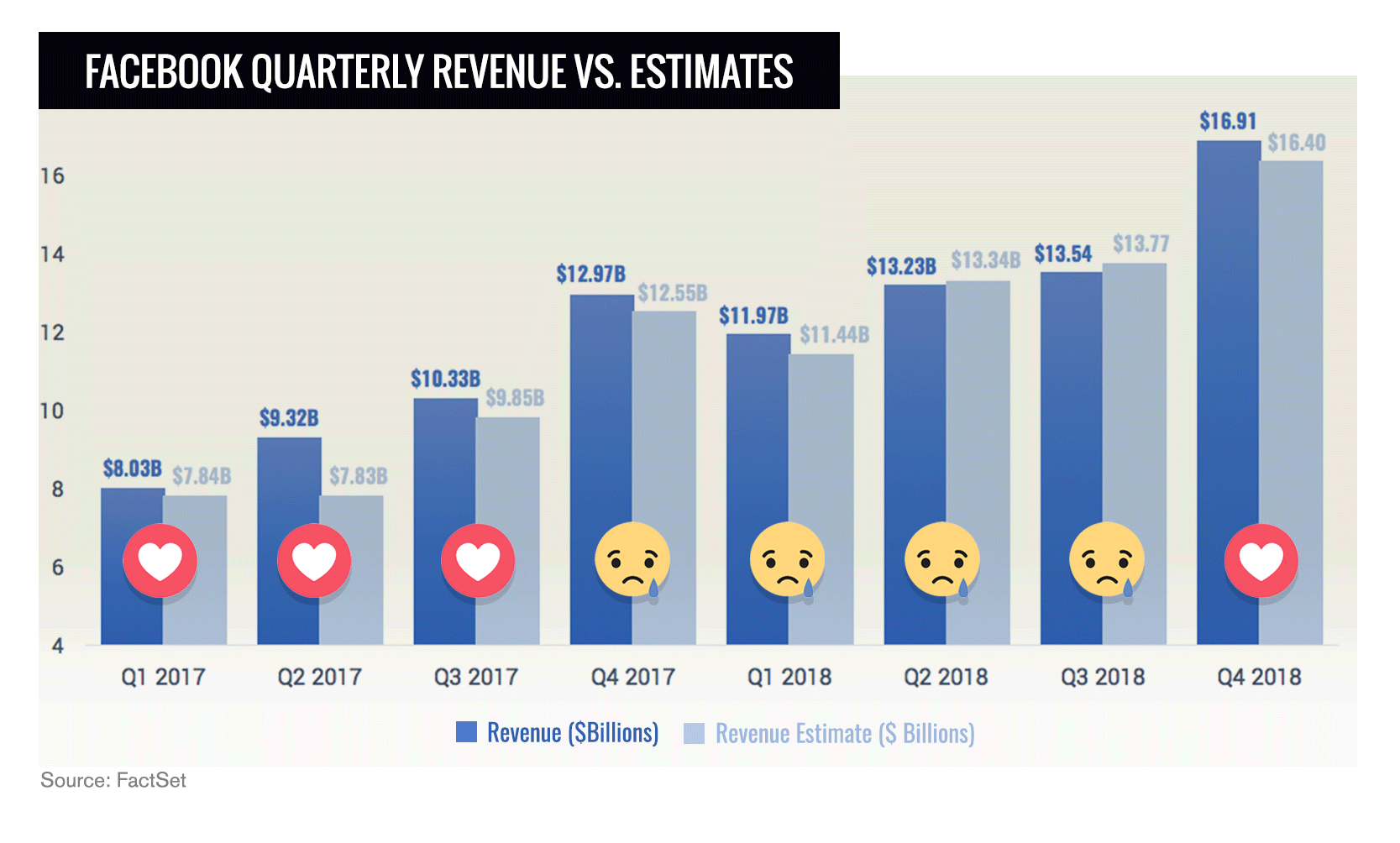 "All in, we continue to view Facebook's liquidity position as unusually strong," RBC Capital Markets analyst Mark Mahaney pointed out.

This could be put to use in short order on big purchases if history is any judge, as the company has not been shy about buying market share so far.

For messaging inroads, Zuckerberg doled out a hefty $19 billion for WhatsApp, for virtual reality it ponied up $2 billion for Oculus, and maybe most notably it purchased Instagram for a cool $1 billion.

Yet, those are only the largest from a long list of 66 total acquisitions made by the company.

Now as it addresses needs in payments, cybersecurity, and video, it would not be surprising to see the company "lean in" to another big buyout.

"I also expect this to be the year where Watch becomes more mainstream," Zuckerberg said. "There are now 400 million people who use it every month. People on average spend over 20 minutes on Watch daily. This means we're finding ways for video to grow outside of News Feed, so it doesn't displace the social interactions that people primarily come to our services for."

Still, its burgeoning platform is still well smaller than Alphabet's (GOOGL) and must compete with numerous other content-delivering services like Netflix (NFLX) for eyeballs.

Acquiring a content partner or tucking in a media player like Viacom (VIA) , which remains at a relatively low valuation, could bring the company firmly into play as a major player in video and media.

Possibly acting against this view is the concerns of some in the investment community about antitrust issues should such a deal come across, especially as Facebook looms large over the social media space already.

Cybersecurity has long been a focus of the company as it combats persistently bad press over its privacy protection capabilities.

Just last year the company announced the hire of 10,000 cybersecurity personnel to shore up its systems.

However, the hiring spree could be accelerated if the company chooses to simply tuck in a data protection partner.

"Over the next few years you're going to have to see M&A within the space," Bill Conner, CEO of SonicWall said in an interview with Real Money. "[Companies] that have to raise their cyber protection frontier in the arms race, they're going to have to acquire."

As a sign of earnest in the effort to improve from Mark Zuckerberg, rumors have circulated that Facebook may acquire , with some proposing it even buy out a major cybersecurity firm like FireEye (FEYE) in order to stave off any further punishment from domestic or international regulators, backing Conner's thesis.

With the cash on hand, such a blockbuster buyout is not out of the question.

If Facebook is indeed looking to shake off its headline risk, those names could provide a perfect opportunity.

Still, some suspect the story begins and ends with the addition of thousands of employees to the cybersecurity ranks last year.

Payments have been a major focus of Facebook as of late, especially as it attempts to institute an internal payment program backed by an effort in blockchain technology.

"Messaging is an area that's growing the most quickly, and this year, people are going to feel these apps becoming the center of their social experience in more ways," Mark Zuckerberg told analysts on Wednesday. " We're going to roll out payments on WhatsApp in some more countries, private sharing in Groups and Stories will become more central to the experience. We're going to onboard millions of more businesses that people can interact with."

The comments on payments caught the ear of analysts who inquired further but received little response from either Zuckerberg, CFO David Wehner, and COO Sheryl Sandberg.

That thesis is bolstered by its focus on its Marketplace that could certainly benefit from a payment platform in the same vein that eBay (EBAY) once benefitted from its PayPal (PYPL) subsidiary.

In fact, Facebook has already partnered with PayPal provide its payment for the platforms, which could breed solid familiarity.

Fuel is added to that as Facebook recently selected David Marcus, a former President at PayPal to head its blockchain efforts which are rumored to be underwriting a decentralized payment platform.

Yet, PayPal might prove expensive. The company has advanced to an all-time high valuation in recent months, possibly taking it off the table for even Facebook.

Interestingly, in an inverse move, Square's (SQ) recently slump could place it squarely into Facebook's wheelhouse.

Real Money's Doug Kass has speculated that competitor Alphabet will be the one to poach the Jack Dorsey side project, but Facebook's aggressive purchasing habits could certainly beat the company to the punch if history serves as an indicator.

Projects on the Plate

To be sure, the company already has some serious spending on its plate.

Wehner outlined the schedule, noting that a great deal of spending is accounted for in share buybacks and business costs.

"Full year capital expenditures for 2018 were $13.9 billion, driven by investments in data centers, servers, network, infrastructure, and office buildings," he said. "In Q4, we bought back approximately $3.5 billion of our Class A common stock and completed our prior repurchase authorization. In December, our board of directors authorized the repurchase of an additional $9 billion of stock."

"I don't see anything imminent," Wedbush analyst Michael Pachter told Real Money. "They are most likely to keep their heads down and try to avoid scrutiny over the security and privacy breaches. I could see a bid for Snap (SNAP) , but only if it were a distressed situation."

That is also unlikely due to the reticence of Snap CEO Evan Spiegel to sell to Facebook in years gone by, but given the trajectory of Snap shares, it is difficult to completely rule out.

In the end, while the addressable needs may be there, it may take time before Facebook finally touts its next spending spree.

The question that remains whether the speculation is over "if" or simply over "when." Judging by history, it may be the latter.

Get an email alert each time I write an article for Real Money. Click the "+Follow" next to my byline to this article.
TAGS: Investing | Stocks | Digital Entertainment | Technology | E-Commerce | Analyst Actions | Cryptocurrency | Stock of the Day