By STEPHEN GUILFOYLE Dec 09, 2022 | 12:13 PM EST
Stocks quotes in this article: COST
Costco ( COST)  released fiscal first-quarter results on Thursday that fell short of expectations on both the top-and-bottom lines -- a rare disappointment for this warehouse retailer.
COST posted unadjusted earnings per share $3.07 (adjusted EPS of $3.10) on revenue of $54.437 billion. While revenue grew 8.1% year-over-year, the result failed to meet or beat consensus view for the first time in three years. The earnings print was the first miss for Costco since the February 2021 quarter.
These results include a pre-tax charge of $93 million related to downsizing the firm's charter shipping that caused a $0.15 hit to EPS. This was mostly offset, however, by a tax benefit of $0.12 per share related to stock based compensation.
Comp sales increased 6.6% from a year ago for the firm as a whole, which was short of the almost 6.9% that Wall Street had in mind, though adjusted for fluctuations in FX and gasoline prices, that 6.6% growth would have been 7.1%. U.S. comp sales increased 9.3%, but just 6.5% adjusted for gasoline. Canadian comp sales increased 2.4% or 8.3% adjusted, while other international comp sales decreased 3.1%, but increased 9.1% once adjusted. E-commerce comp sales decreased 3.7%, or decreased 2% adjusted.

Membership fees came to an even $1 billion, up 5.7% from the year-ago comp. Foreign exchange rates hit the membership fees number to the tune of $32 million. This is a very important metric, as net income for the quarter came to $1.364 billion (+3%), so this one item, which is separated from net sales on the statement of income, also in isolation, accounts for 73% of the firm's profitability. Renewal rates for the U.S. and Canada improved from 92.4% for fiscal fourth quarter 2022 to 92.5%. Globally, renewals ran at 90.4%.
The firm ended the quarter with 66.9 million paying household members and 120.9 million cardholders. Both of those metrics were up 7% from a year ago. Executive memberships increased by 904,000 to an even 30 million. This group now accounts for 45% of paid memberships and 73% of global sales.
Gross margin dropped by 45 basis points (21 bps, not including gasoline) year-over-year to 10.61% as the cost of merchandise increased 8.68% to $47.769 billion. Operating income increased 3.4% to $1.751 billion on a merchandise operating margin as a percentage of net sales of 1.41%. Including membership fees, operating margin rises to 3.22%.

Balance Sheet: On Balance, Not Bad

Costco ended the quarter with a cash balance of $11.673 billion and inventories of $18.571 billion. These numbers are both up, though not significantly from August. Current assets amount to $34.15 billion. Current liabilities add up to $33.067 billion, of which the majority is in accounts payable. The current ratio of 1.03 may not seem to be so far above the level that we look for, but is far better than most other big box retailers' second half of 2022 -- at least the ones I've checked. The quick ratio of 0.47 does not raise undue alarm, as this is an inventory-centric business and Costco does seem to have a handle on their situation.
Total assets come to $66.027 billion. The firm includes no "goodwill" or any other intangibles in this number. Total liabilities less equity stands at $44.551 billion, including $6.472 billion in long-term debt. This is a solid balance sheet. For a retailer of Costco's size, this is an outstanding balance sheet.

Since this report was released on Thursday night, I have seen eight sell-side analysts rated at four stars or better by TipRanks who have also opined on COST. Across these eight, there are six "Buy" or equivalent ratings and two "Hold" or equivalent ratings. The average target price across the eight is $539.88, with a high of $580 (Joe Feldman of Telsey Advisory) and a low of $450 (Edward Kelly of Wells Fargo). Once omitting the high and low as outliers, the average target price across the other six rises to $548.17.

Costco is very well run -- even when it disappoints. This is obvious. There is no guidance, as the firm updates the public on sales performance monthly. That's not a problem. One problem that's no fault of Costco's whatsoever is the valuation at 33- times forward looking earnings. Are you paying for growth? Not exceptional growth. That means you are paying for efficiency and profitability. I can plainly see the efficiency. The profitability may have hit a slower pace of growth.
That means that in order to sustain this valuation or something close to it, management is going to have to pull one or more not often used levers to either boost performance, or attract the buy-side. Costco pays shareholders $3.60 per share per year ($0.90 per quarter) in regular dividend. Seems nice. It's actually a yield of just 0.75%, so it could be nicer. The firm could go that route, either increase the quarterly payout or dish out a special dividend which is something management has done in the past every two years or so. (By the way, it's been two years). As mentioned above, Costco does have a net cash position of $11.673 billion and long-term debt of $6.472 billion, so there is room to use some finesse to keep the shareholders on board.
Beyond that, there's always the possibility that COST could increase membership fees. CFO Richard Galanti, in response to a question from Rupesh Parikh of Oppenheimer, actually did say that this action would be a "question of when, not if." Galanti did, however, openly wonder if the timing was not right. 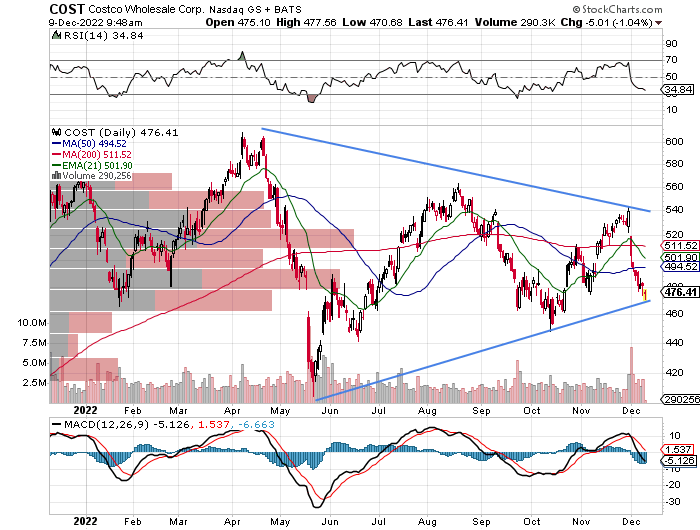 Readers will see that COST has been in a narrowing symmetrical triangle since April. This is reflective of decreasing volatility, which makes sense because the stock had a range of more than $200 at the start of the pattern. These patterns do tend to close with a bang, so there could be an explosive move in the stock's future. Today's 1% selloff is not it.
Relative Strength is rather weak as is the daily Moving Average Convergence Divergence (MACD) oscillator. That said, the stock is trading at the lower trendline of that triangle, which should / could provide support. All of the traffic (volume) has been in between $450 and $550 since the start of this chart and the three key moving averages that I follow are all in between $494 and $511. That tells me that there is probably an upside catalyst out there. I could be wrong. The valuation must be supported though, or the share price will crack.
I would rather be long a small- to medium-sized position at the bound of that lower trendline than sell the shares there if I were already long. My idea is to buy something small here today and perhaps more next week after the Federal Open Market Committee rate shindig. The pivot? The 50-day line. The target? tough question. Maybe the 200-day line. Maybe a lot higher. Show me either an increased regular quarterly dividend or a special payout.
(CMG is among the holdings in the Action Alerts PLUS member club. Want to be alerted before AAP buys or sells this and other stocks? Learn more now.)

Get an email alert each time I write an article for Real Money. Click the "+Follow" next to my byline to this article.
TAGS: Earnings | Investing | Stocks | Food & Staples Retail | Retail