On Thursday evening, big box warehouse retailing giant Costco (COST) put the firm's fiscal first quarter financial performance to the tape. Bear in mind that it is difficult for Costco to surprise us, because they are one of the last of their kind... a corporation that tells us how they are doing every month.

For the reporting period, Costco posted adjusted EPS of $2.77 and GAAP EPS of $2.98. By both metrics the firm did beat Wall Street. What's that? No, no misprint here. Costco did actually adjust their profits downward due primarily to a $0.21 per share tax benefit related to stock based compensation among other items. Costco also generated $50.36B in revenue over these three months, up 16.5% year over year, and also ahead of what Wall Street was looking for.

The key metric, I think for investors, was comparable sales. Here too, this time thanks to rising gasoline prices and fluctuations in currency exchange rates, the firm adjusted its own results lower. Company wide, comp sales increased an adjusted 9.8%, well above the Wall Street consensus of 8.3%. This does surprise as the firm does provide monthly updates. Breaking out the comparisons further, growth amounted to 9.9% in the U.S., 8.3% in Canada, 10.9% elsewhere, and 13.3% online.

It's not like Costco has been untouched by inflation, or contracts in supply lines. Richard Galanti, the firm's CFO, mentioned that he is seeing year over year inflation between 4.5% and 5%, and that the firm has put in a lot of work to mitigate price increases. Galanti feels "pretty good" despite the issues at hand, about "staying in stock." Incredibly, because I have been in these stores, or at least the ones near my home, and they look well stocked. I say "incredibly" because during last night's call, Galanti admitted that "About 79 of our import containers are late by an average of 51 days."

As for the impact this places on the firm's performance, there has been downward pressure on margin, that in turn has been exacerbated by fuel prices. Core merchandise gross margin contracted 63 basis points, or 26 basis points ex-gasoline inflation. In terms of core margin of the firm's own sales, that metric suffered a contraction of 18 basis points, driven lower by fresh foods.

Paid executive memberships increased 836K over the three months to 26.5M, while total cardholders increased 1.5M to 113.1M over the same period. Membership driven fees increased 9.9% year over year to $946M, besting the $930M that Wall Street had in mind. Renewal rate (retention) across the U.S. and Canada were 91.6% up from 91.3% for the prior quarter.

As of Nov. 21 -- the end of their fiscal quarter -- the firm's net cash balance (cash, equivalents, and short-term investments) is up significantly, as are current assets on the strength of a pre-holiday season inventory build. Total assets are up by roughly the same dollar amount as are current assets.

The balance sheet is "good enough." I would like to see a higher current ratio than the one that now hovers around the 1.0 mark, but that would not get in my way if I wanted to be long this name.

I like Costco. I have been in and out of this name throughout the pandemic, but not of late. The rising membership and rate of retention are encouraging. That's recurring revenue. I don't like the fact that Costco trades at 44 times forward looking earnings. I do like the fact that the shares trade at just 1.2 times sales. I like the way they do business. Period.

One thing interested investors should know is that COST pays shareholders $3.60 per share per year, but at these prices, it's a yield of just 0.6%. However, Galanti was asked specifically during the call about the possibility of a special dividend by Karen Short of Barclays. Galnati was understandably evasive with his answer, but did mention how strong the firm's cash flow from operations has been, and that the firm has done something like that four times in the past eight years.

His answer made me think that this is indeed a possibility. 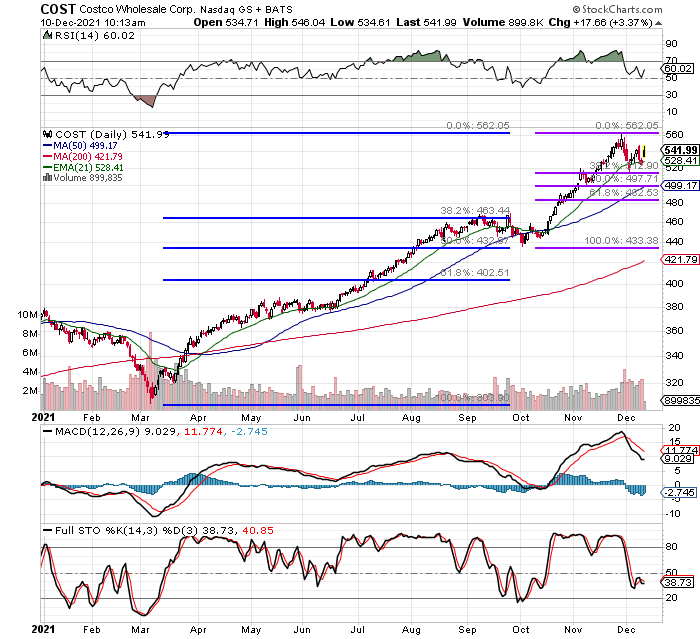 Costco is still coming out of an "overbought" condition. The solid earnings and potential for a special dividend has put a renewed bid under the shares. Readers will see that Fib support has shown up where it was supposed to, at least based on the retracement of the early October through late November run.

I almost see Costco as a short-term short opportunity, but I don't think I can go there, at least not until the special dividend chatter dies down. Longer-term, I think this is a good name, but hard to buy here.

At least this way, the buyer, though profit is limited for a week, has reduced the risk through the next Fed meeting.