By STEPHEN GUILFOYLE Jan 07, 2020 | 12:15 PM EST
Stocks quotes in this article: AMD, INTC, MSFT, SNE
What is cool? Fonzie was cool. Some folks are born cool, others either play catch up, or what is considered to be cool catches up to them. There are those that can guarantee the Super Bowl as an underdog and then back it up. Joe Namath was cool. Others can hit a jump shot in the clutch. Clyde Frazier. Nobody was cooler. How about Gene Simmons? Dress up like some kind of monster, hit an A-chord that cracks the ribs of those sitting up front and get 25,000 right arms pumping fists in the air. Now, we bring cool to the next level.
Not a lot of folks can take over a struggling semiconductor firm trading in the low single digits, and within four years lead that firm to the best stock price performance for the year across the entire S&P 500. Then -- wait for it -- repeat as champion in year five. Yeah, Lisa Su, of Advanced Micro Devices ( AMD)  is that kind of cool. In a class all by herself. Shares of AMD ran 73% higher in 2018 as the S&P 500 gave up 6%. AMD ran 148% in 2019, as the S&P 500 gave us 29%. Three-peat? Impossible. At least that's what they say. Let's check it out.

Advanced Micro Devices has been a frequent topic for me at Real Money. I last wrote on this name on Dec. 24, and in late October in response to a third quarter earnings report, which you may recall, fell short on the revenue side. Although gross margin was strong, AMD at that time guided Q4 revenue quite conservatively. The stock sold off -- for one day -- and then took off pretty much for the rest of the year. Why? Basically because performance had been excellent at the firm's largest segment, that of computing and graphics. The unit saw sales increase by 36%, and clearly take market share away from Intel ( INTC) . The part of the firm that had done poorly -- the "enterprise embedded and semi custom" unit provides gaming processors to the likes of Microsoft ( MSFT) and Sony ( SNE) . In short, if gaming gets hot, so does this segment.
When I wrote in December, I made mention of positive commentary that had been made by Wedbush analyst Matt Bryson who cited positive reviews for the latest Threadripper line of processors, and RBC Capital's Mitch Steves, who placed a then industry-high $53 price target on the shares based on the likelihood on improving businesses in both the data center, and you guessed it, gaming. That was great, but there's more.

Since then, Rosenblatt Secrurities' Hans Mosesmann reiterated his Buy rating, while increasing his target to a new industry-high of $65. Mosesmann made AMD his top semiconductor pick for 2020, and cited coming next generation gaming consoles forthcoming form both Microsoft and Sony as tailwinds for the stock as 2020 winds into its second half. Next at the plate was Nomura's David Wong. Wong expects AMD to "continue to strengthen its competitive position" this year, and raised his price target all the way from $40 to $58. What do Steves, and Mosesmann, and Wong all have in common? Of the 5,775 analysts rated by TipRanks, all three of these individuals are ranked in the top 200.

Just a few hours ago on Tuesday morning, ahead of this week's Consumer Electronics Show -- better known as CES -- 2020 trade show in Las Vegas, Lisa Su spoke from the Mandalay Bay conference center. The firm announced a Feb. 7 launch of a new 64 core, 128 thread Threadripper 3990X aimed at the high-end desktop market that comes with a suggested starting price of $3,990. The firm also announced a number of new Ryzen 4000 mobile processors aimed at different laptop markets covering the consumer, the professional, and also gamers and creators. In each and every case, the firm makes note that these new or updated products either fill needs or out-perform their direct competitors. 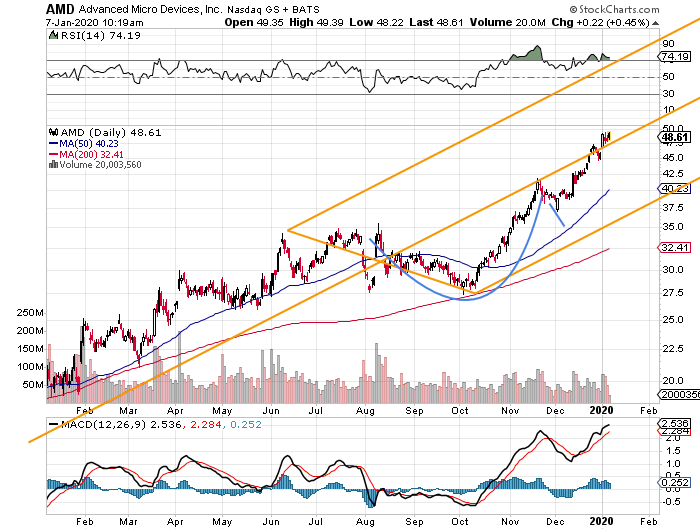 This is an updated version of the chart that I drew up for you two weeks ago. You will note that the shares have taken the central trend line of my Pitchfork, as well as my $48 price target as the break-out of out cup with handle pattern has become more pronounced.
What do I do now? I've already lightened up just a bit above $46, not looking to take any more off, I would rather add whenever it is that we see the entire group sell off. (Note to traders, buying quality on industry-wide sell-offs is how you pick off passive investors, who don't know one name from another.) Advanced Micro Devices is expected to report on Jan. 29.

For every 100 shares owned:
- Sell (write) one AMD Jan. 31 $53 call for roughly $1.25.
Note: This reduces the investor's net basis by $1.25, capping profit at the $53 level at expiration.
For as many shares desired (understanding that these shares have been sold at $45):
- Sell (write) one AMD Jan. 31 $44 put for roughly $1.07
Note: This exposes the investor to potential equity risk at expiration with a net basis of $42.97 with the shares that have already been sold at $45, now trading below $44. Should the puts expire, and the $45 panic point remain untouched, net basis on the exiting long is reduced by an additional $1.07. (total reduction: $2.32)
(MSFT is a holding in Jim Cramer's Action Alerts PLUS member club. Want to be alerted before Jim Cramer buys or sells it? Learn more now.)
Get an email alert each time I write an article for Real Money. Click the "+Follow" next to my byline to this article.
TAGS: Investing | Stocks | Technology | Technology Hardware & Equipment