Wine, spirits and beer giant Constellation Brands (STZ) is trading lower Thursday despite beating earnings and revenue expectations in its quarterly results, although its investment in cannabis company Canopy Growth (CGC) has yet to pan out.

In the daily bar chart of STZ, below, we find some interesting chart developments. First we notice that the shares have failed in the $255-$260 three clear times in the past year. Pullbacks in June, July and August roughly held the rising 200-day moving average line. In the September pullback prices behaved weaker in that rallies to the underside of the 200-day line have failed and STZ has made a new low for the move down.
The On-Balance-Volume (OBV) line shows weakness from late August breaking an upward trend from last October. The Moving Average Convergence Divergence (MACD) oscillator is in a bearish alignment below the zero line.

In the weekly Japanese candlestick chart of STZ, below, we see mixed signals. Prices have traded sideways for months in one of two possible patterns -- either a bullish rising triangle pattern or a potentially bearish rectangle. The eventual breakout will tell us which pattern we are witnessing. STZ is trading below the rising 40-week moving average line.
Trading volume is steady but the weekly OBV line has been in a decline telling us that traders are more aggressive sellers of STZ shares. The MACD oscillator is just slightly above the zero line and close to a sell signal.

In this daily Point and Figure chart of STZ, below, we can see a potential downside price target in the $197 area.

In this second Point and Figure chart of STZ, below, we used weekly price data. Here the chart points to a $199 price target. 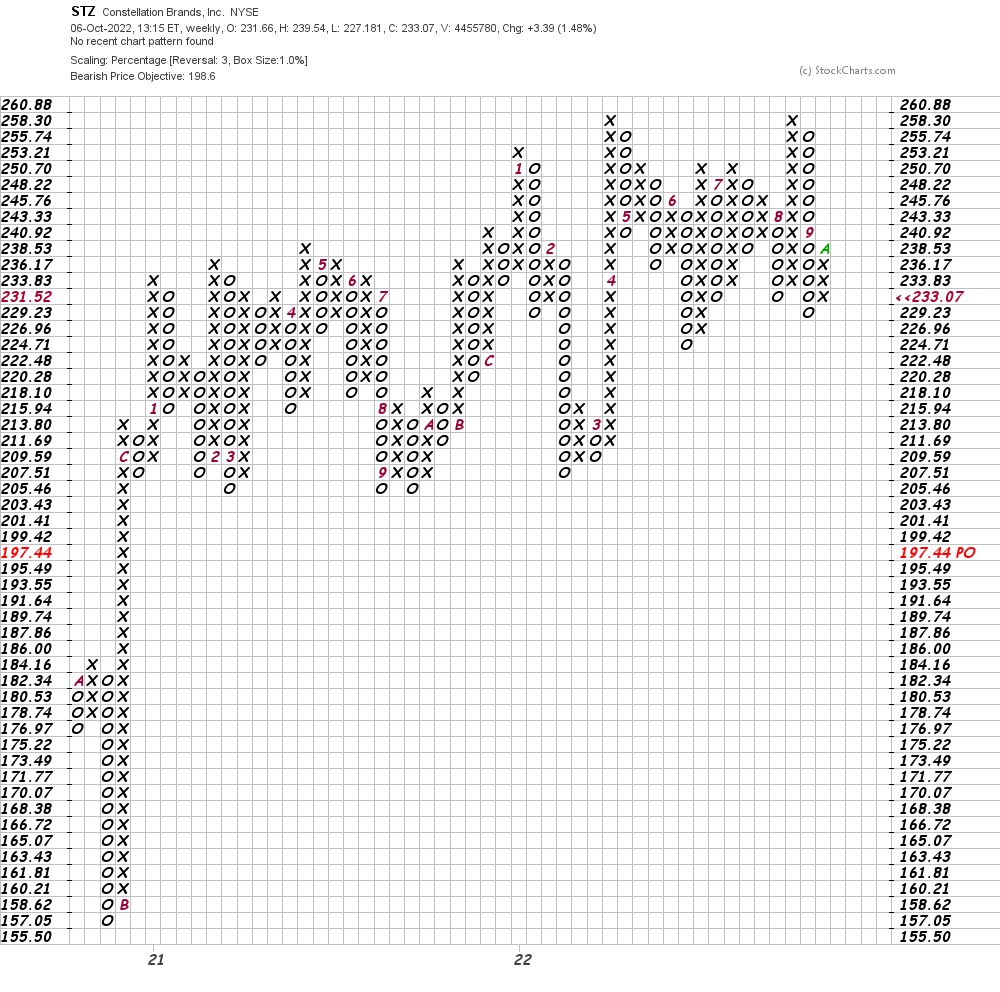 Bottom-line strategy: You might call the charts of STZ mixed but in this current weak market environment the risk is for further declines.
Get an email alert each time I write an article for Real Money. Click the "+Follow" next to my byline to this article.
TAGS: Earnings | Investing | Stocks | Technical Analysis | Beverages | Cannabis