For his final "Executive Decision" segment of Mad Money Wednesday night, Jim Cramer checked in with Bill Newlands, president and CEO of Constellation Brands (STZ) , the wine and spirits maker whose shares rose 6.2% after reporting strong sales on Wednesday.

Newlands said despite many headwinds in the quarter, Constellation was still able to deliver great results. He said while on-premise consumption of their products continued to be down because many restaurants and bars remain shuttered, off-premise sales were up. Constellation is overweight toward off-premise, Newlands said, which led to their strong sales.

When asked about his company's investment in Canopy Growth (CGC) , Newlands explained that he has confidence in their new leadership and zero-calorie, cannabis-based beverages will be a game-changer.

Let's check out the charts and indicators to see if they are game changers too.

The On-Balance-Volume (OBV) line has been climbing strongly from a March low and confirms the price gains we have seen. Buyers of STZ have been more aggressive than sellers and that is what old-time chart watchers like to observe.

The Moving Average Convergence Divergence (MACD) oscillator shows weakness in June but is now poised to cross to the upside for a fresh buy signal.

In this weekly bar chart of STZ, below, we can see that prices have moved above the declining 40-week moving average line. The downtrend from early 2018 is about to be broken.

The weekly OBV line shows a positive pattern from early 2019 and is close to making a new high for the move up. The MACD oscillator is quickly approaching the underside of the zero line and hopefully an outright buy signal.

In this daily Point and Figure chart of STZ, below, we can see the new high for the move up (a.k.a. breakout) and the potential $234 price target. 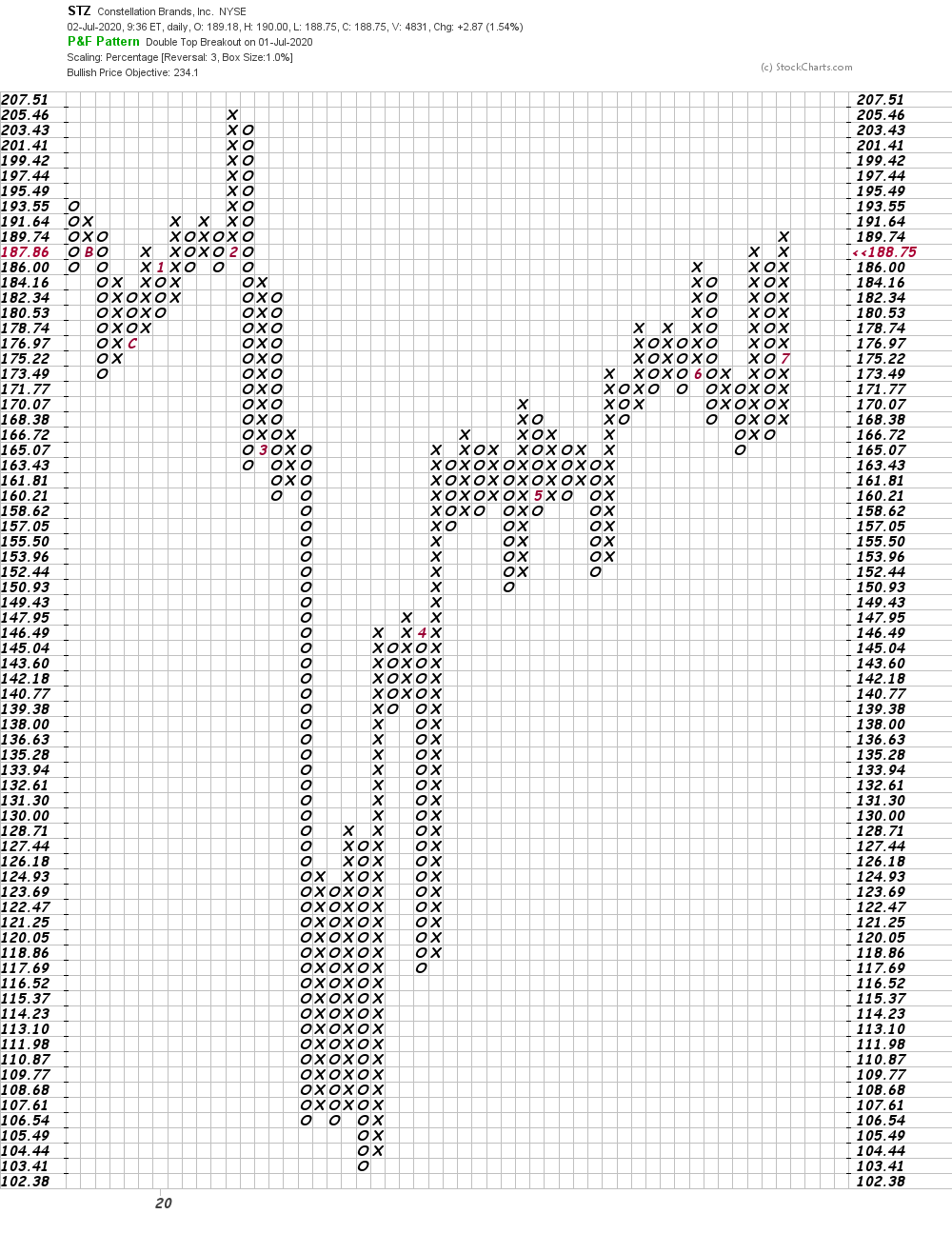 Bottom-line strategy: After a long decline from early 2018 it looks like STZ is ready to launch a sustained uptrend. Traders could go long STZ at current levels risking a close below $170 for now. The $234 area is our first price target.

Get an email alert each time I write an article for Real Money. Click the "+Follow" next to my byline to this article.
TAGS: Earnings | Investing | Stocks | Technical Analysis | Beverages | Food & Drink | Mad Money | Executive Interview | Cannabis